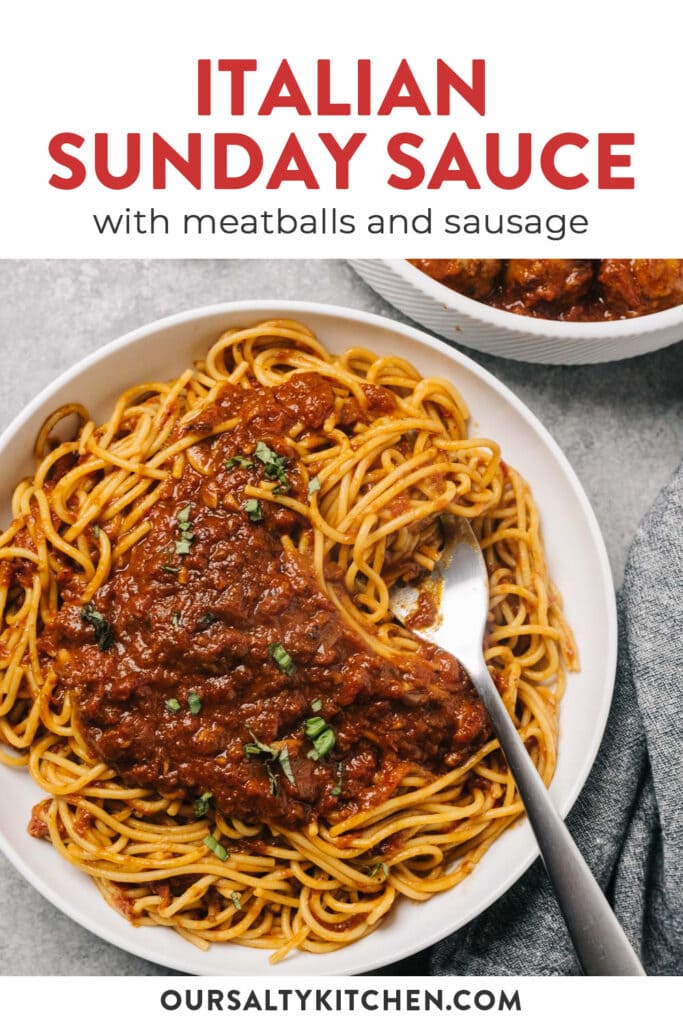 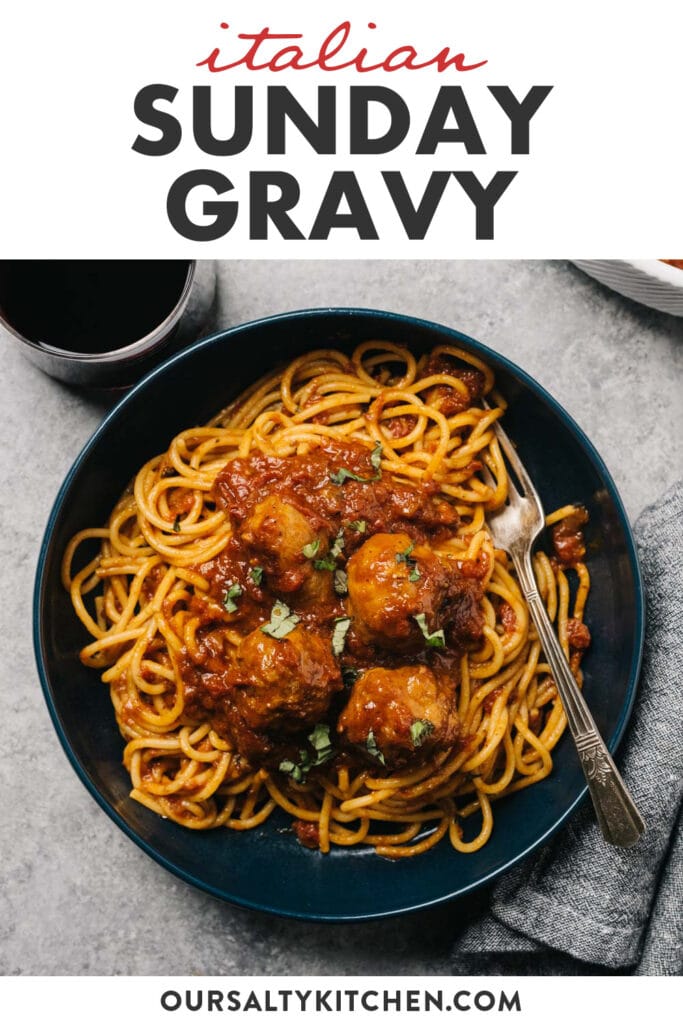 There may be no better example of an heirloom recipe than Sunday Sauce. That quintessential blend of tomatoes, onion, and garlic, slow simmered low and long with a magical blend of Italian seasonings until it transforms into a thick, rich gravy. Served over pasta with sausage and meatballs, it makes a practically perfect meal. Don’t forget the vino – for you and the sauce!

Picture it: Jersey. 1992. Tarantella Napoletana playing on the radio. A candle in a basketed chianti bottle flickers atop a red and white gingham tablecloth, while a girl stands at the stove with her nonna, learning the secrets of their traditional sauce recipe…

Yeah. Literally none of that happened.

First of all, there was a family recipe, but my grandmother held on to its secrets with the same iron grip she used to hold her wooden spoon – both for stirring said sauce and occasional thwacks for misbehaving grandchildren. I didn’t know her secret ingredient was the tiniest pinch of cinnamon until I was in my 30’s and well into making my own versions of her sauce.

Second, Sunday Sauce as we know it is an inherently Italian-American thing, so its not like her recipe came directly from the “old country” either. (And I have news for you, your grandmother’s sauce also is not “the OG.”) Further, Grandma – actually Babcia – is Polish. But she loved her husband and her (truly OG) mother-in-law so much that she spent 50 years perfectly their version of Italian American Sunday Gravy. So.

But this is all kind of the point, and totally in the spirt of Sunday gravy making. Sauce is always going to change with the times (literally and figuratively)- what’s available the day before at the market, what meat you can afford, if you can afford any meat, what wine you have on hand, whether you have the gumption to make meatballs, etc. We pick up tips and tricks from our families; we carry on traditions; but the roots are the same.

So, if you don’t have your own “roots,” please, feel free to use mine to grow your own Sunday Sauce. I promise the time it takes is worth every bite and every memory.

What is Sunday Sauce?

Sunday Sauce isn’t just a sauce. (And I don’t mean that in the sense that you could literally eat a bowl of it as a meal on its own.) Sunday Sauce is a whole thing. It can also be the centerpiece around which lots of other things happen. But regardless, it’s an event, in and of itself. A full-day, sun-up to sun-down process. A marathon, not a sprint.

That being said, Sunday Sauce is, in fact, also a sauce. If you need to qualify it more, it’s pasta sauce (though it certainly can be eaten without pasta and with other things – try it over polenta).

Sunday sauce is tomato-based and simmered long and slow until it could conceivably thicken back into the paste from whence it came. Thicker than stew. In fact, despite possible naming right violations, I prefer it thicker than gravy. Deep, deep, deep murder red in hue, and when I say chunky, I mean chunky – this is not pizza sauce.

So the only people I know who quibble about this were raised in either a sauce house or a gravy house and then married someone from another camp. (Like 20th century Capulets and Montagues.) Most people have their family word for it and stick with it and pass it on to their kids.

Some people say it has to do with the region they’re from, some say it’s age or when their family emigrated, some say it depends on how many times you’ve watched the Sopranos. But there’s no real pattern of distinction. And to be clear, there is no substantive difference between Sunday Sauce and Sunday Gravy.

So, It’s Not All Just Marinara?

Forget the semantics of sauce vs. gravy, and hold on to your hats for the lesson you never knew you needed. All marinara is tomato sauce, but not all tomato sauce is marinara. Plenty of Italian sauces have tomatoes, but not all will have a tomato base. Capisce? Here’s a quick primer:

Do I Need to Crush the Tomatoes by Hand?

*ahem* (I’m channeling the spirits of the many Italian women who came before me): “You don’t need to do anything. You could do that, but you don’t have to. I think it tastes better but if you don’t want to listen to me, go ahead, break my heart. Just go to the store and buy sauce in a jar, why don’t you?”

In all seriousness, it’s all simply a matter of (1) tradition and (2) texture. I’ve always used whole. They serve as a good visual gauge for progress – when they’ve fallen apart or disintegrated, you’re there. If you cook it as long as Italians and nature intended, everything in the pot becomes one with the sauce anyway.

What Kind of Meat Should I Use?

This recipe calls for sausage and meatballs for eating purposes, not slow simmered purposes. You’re going to add them toward the end. If you have a vegetarian at the table, I recommend scooping out a serving or two before simmering the meat.

If you want a meatier sauce, you can absolutely treat this recipe as a base, and add meat to the cooking process:

How to Add Meat to Sunday Sauce

What does it mean to “sweat” onions?

To cook them until all the water evaporates, but the onions don’t brown. You’ll know they’re fully “sweated” once there is no water content left in the pot – the onions will be transparent and with just a thin layer of fat (in this case butter) visible. Sweating imparts the flavor of onions without their naturally sweet sugars developing.

How long should I cook Sunday sauce?

At least 6 hours – up to 10. The sauce is ready when it’s very deep red in color and the tomatoes are falling apart. The sauce will appear “muddy” and be very thick.

What kind of pasta should I use?

Any and all pasta is fair game, but I swear by good old spaghetti. Long and thing ensure lots of sauce coverage.

What kind of pot should I use?

You’re going to need a heavy bottomed pot that retains heat well. I use my trusty dutch oven. You may also want to use a heat spreader to prevent scorching if your gas stove is temperamental. It’s not a necessity, but it makes a difference considering the extensive cooking time.

A flat cooking element that can be positioned over a burner to aid the cooking process by controlling heat distribution. It works on gas and electric stoves.

Did you make this Sunday Sauce with Homemade Meatballs? I’d love to know how it turned out! Leave a comment and a rating below. 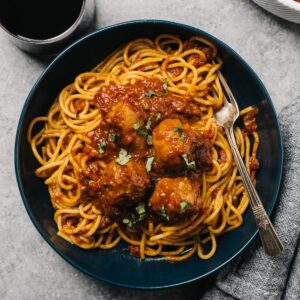 No ratings yet
Author: Danielle Esposti
Print Recipe Rate this Recipe Pin Recipe
Sunday sauce is an essential Italian staple. It's cooked long and slow, resulting in a robust flavor and thick texture. I serve it over spaghetti or bucatini pasta with homemade meatballs. NOTE: This recipe requires a minimum of 5 hours including prep time and up to 10. It's best to start first thing in the morning.
Prep Time: 40 mins
Cook Time: 6 hrs
Total Time: 6 hrs 40 mins
Servings : 8 servings
Calories: 824

For the Sunday Sauce.