It’s the first official week of the Minimalist Foodie Challenge and my first posted recipe of the challenge – Spinach and Onion Quiche! We’re plugging along over here…some peaks, some valleys, and some general makin’ it work. I’ll post a full recap over the weekend, along with next week’s recipes.

Speaking of making it work, I’m typing this blog post with one hand as my other is busy holding a very cranky, but snuggly, little babe who is exhausted but considers napping optional. I had intended to post this spinach and onion quiche recipe at least 8 hours ago, but he clearly had other plans for me today. In addition to listening to the Hamilton cast recording on repeat, exclaiming “Are you a baby boo-boo bear? You ARE!” 6348 times a day, and microwaving the same cup of coffee every 30 minutes, doing things with one hand at half the speed is basically my life. I am a one-handed wonder.

As I listen to Asher squawk and feel his tiny nails dig into my arm, I am starting to consider that my child might actually be a pterodactyl. He’s got razor sharp talons, is clearly a carnivore based on the amount of flesh he chews (mine, not his), and screeches all day long. I just googled “what sound does a pterodactyl make” and found this video. Suspicions confirmed. He could also be part-vampire based on his nighttime sleeping habits, but I’m placing my bets on extinct flying dinosaur.

Also in the vein of making it work (see what there? eh?), quiches are a fantastic dish for taking odds and ends you might have trashed and transforming them into a hearty, nutritious meal. Plus I can get at least one dinner and two lunches from a single quiche, so it gets a big fact check next to the “stretch the budget” box. In this case, we are making one from fresh veggies, but knowing you can chuck just about any cooked vegetable into some eggs and turn it into a meal will come in handy eventually.

I’m using caramelized onions here, but you can just sauté them until they’re browned around the edges to cut down the cooking time. The result won’t be as subtly sweet but will still be super delicious.

DO take the time to precook the spinach. Fresh spinach has a very high water content, which you steam off during the sauté process. A soggy quiche is a sad quiche.

I made this pastry crust with 100% whole wheat flour, and the result is a slightly chewier texture with a mild nutty flavor. You can substitute half white flour or go entirely white, but if you do, reduce the butter to 8 tbsp (half a stick). These also freeze beautifully, so  since you are perpetually short on time, make a few extra, wrap the dough in individual portions in plastic wrap, and stick ’em in a freezer bag. When you’re ready to use, thaw in the fridge in the morning. They’ll keep well frozen for 4-6 weeks.

Vegetable substitutions here are endless. Brussels sprouts, roasted butternut squash, sweet potatoes, kale and chard (really, any dark leafy green) are all in season and would shine. Experiment with red onions instead of sweet yellow. I like harder cheeses for quiche, as they prevent the crust from getting a bit gummy. If you go the route of cheddar, try a sharp variety. Emmental and Gruyere are also popular options.

Did you make this Spinach and Onion Quiche? I’d love to know how it turned out! Leave a comment and a rating below. 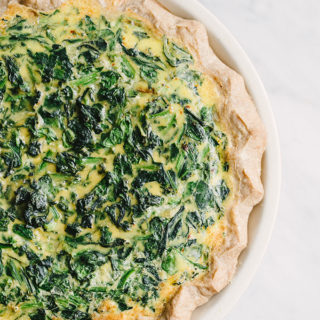