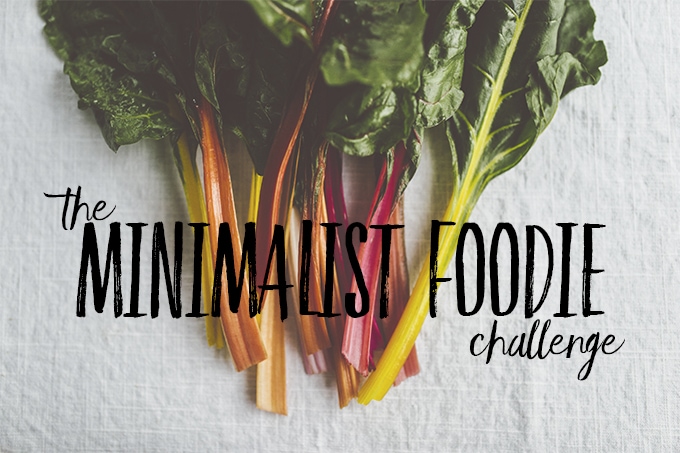 Welcome to the Minimalist Foodie Challenge! You guys, I am so flipping excited about this project, and I can’t wait to see how the year unfolds.

In many ways, I’ve been working towards a major shift in my approach to cooking and food consumption for years. When Kid A was born, I made a focused effort to cut sugar and processed foods out of our diet. Over the years, I’ve added other sustainable elements, including shopping local, purchasing in-season produce, sourcing grass-fed and pastured meat and dairy products, experimenting with fermentation and sprouted grains, and growing veggies in our little backyard plot. The Minimalist Foodie Challenge is the culmination of these baby steps into one giant new approach. 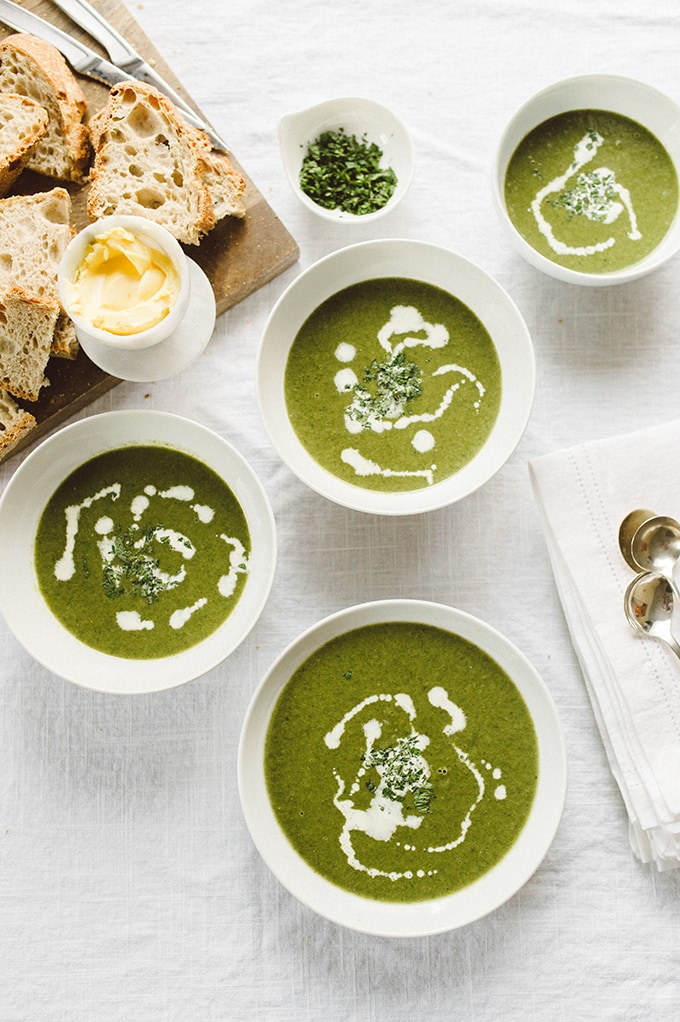 Our Path to Minimalism Lite

Two years after Kid A was born, I found myself starting into my considerably sized walk-in closet, overflowing with clothes, and agonizing over the fact that I “didn’t have a single thing to wear”. The reality was that I simply had too much crap. Three days later, I’d combed through my entire wardrobe and donated over 80% of my clothing, shoes, bags, and accessories. I’d slimmed down my closet to pieces that fit me at that moment and that I knew I’d reach for time and again. Gone was the satin strapless dress that I’d worn once four sizes ago. Gone were the nasty lounge pants that had holes in the seams.

Purging in such an epic way gave me a high, and I needed another fix. Thankfully I got my chance about a year later when Cameron and I decided to move into our current little (but not tiny) house. We carefully sorted through all of our and the kid’s belongings and hauled literal truckloads of stuff to Goodwill. We sold items on Craigslist and gave away countless others. When we moved into our new home, it still felt overstuffed, so we did a second purge. Somewhere in the midst of these purges, I discovered the Minimalist movement. A lot of it resonated with me, and some of it didn’t. I embraced what I loved and left behind what didn’t fit. 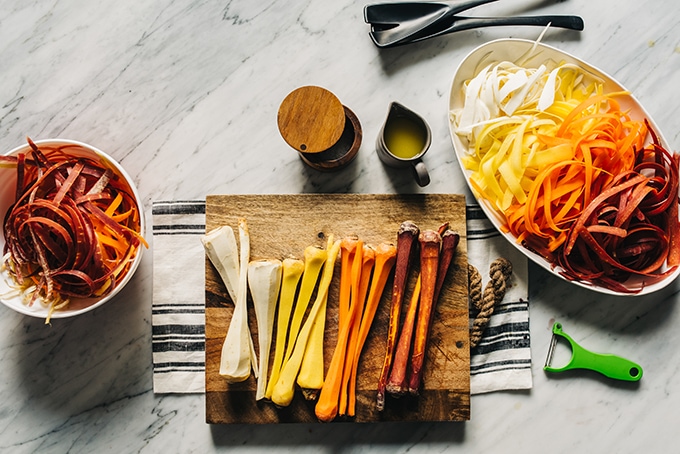 I’ve often struggled with meshing my deep love for food and cooking with the concept of minimalism. On the one hand, we are what we like to call “conscientious omnivores” – we mindfully consume whole foods that are seasonal, organic where needed, and local when possible. We consume minimal white sugar and only indulge in occasional processed foods. On the other hand, there isn’t a recipe I’ve stumbled across that I haven’t been willing to try at least once. My pantry and fridge are stuffed to the brim with ingredients that I only used a portion of and stashed away to finish up at a later time. Consequently, we waste a lot of food. I’m not proud of that, and after reflecting on the progress my husband and I have made in our attempt at “Minimalism Lite”, I knew I needed to make a significant change. 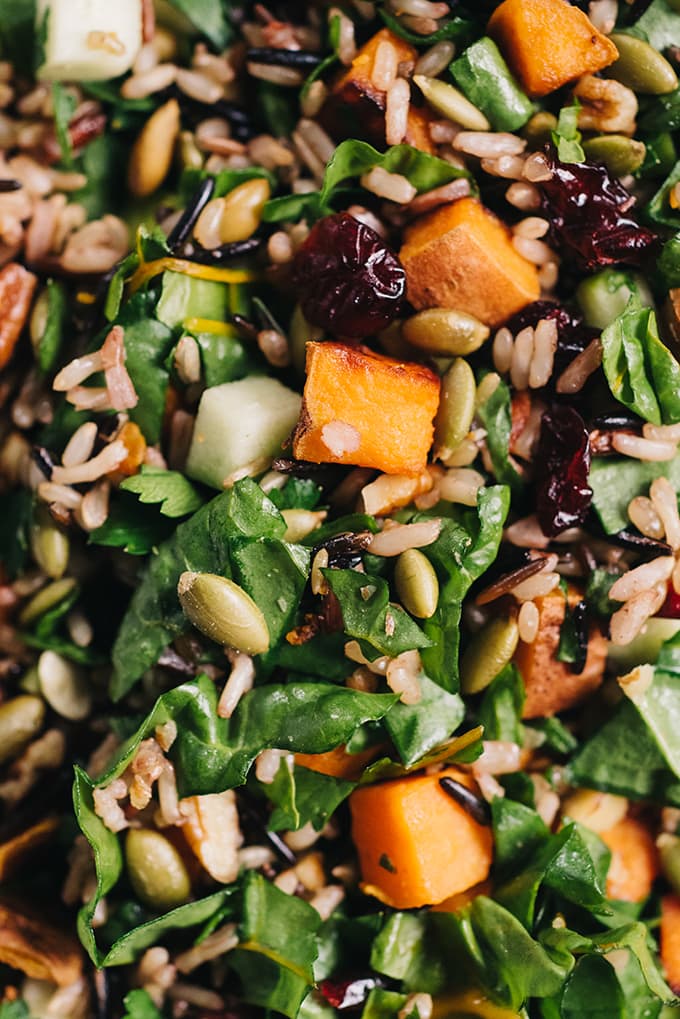 The Minimalist Foodie Challenge Elevator Speech: This challenge has four goals at its core: reduce waste, spend less, buy the best, maximize variety. Each season (January to March, April to June, July to September, October to December), I’ll select 50 in-season, local (when possible) and sustainable (when practical) food ingredients and five beverages. Processed foods are prohibited. All meals, inclusive of breakfast, lunch, dinner and snacks, will be derived from these ingredients. Limited exceptions will be made to accommodate meals for the Kid, the occasional treat, and travel. I’ll post weekly meal plans on Saturdays, and at the conclusion of each season I’ll share my grocery budgets and report on waste.

Note:  This concept is based loosely on the Capsule Kitchen Challenge via the Be More with Less blog. I stumbled upon Courtney’s blog when I was purging my closet and was hugely inspired by her Capsule Wardrobe. (I’m doing a Project 333 right now!) I was intrigued by the Capsule Kitchen, but ultimately didn’t participate. A cap of 33 ingredients was simply too restrictive, and based on many of the recipes I’d come across most participants were choosing to go vegetarian or vegan to keep within the guidelines. I don’t know about you, but I like beef and cheese way too much, as we’ve previously discussed. But the idea kept niggling at me. So I made significant modifications to maximize my core foodie beliefs – variety and sustainability- and here we are!

50 Foods, 5 Beverages. Choose 50 ingredients to cook with from January through March, as well as 5 beverages. Condiments, herbs, and spices don’t count, as long as I’m using less than a tablespoon per individual portion.

Whole Foods or No Foods. Let’s all say it together now – no processed foods! That means I’m not buying bread, crackers, naan, store-bought hummus, or cereal. I’m making an exception for pasta because, while homemade pasta is divine, ain’t nobody got time for that. 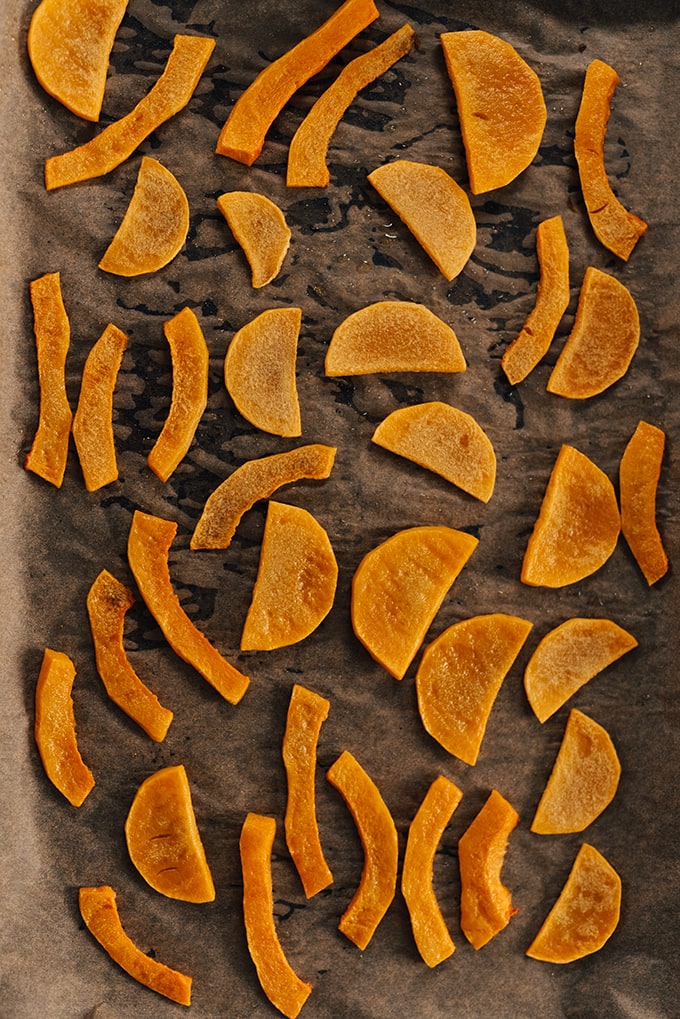 Specificity is in the Eye of the Beholder. Sourcing in-season, local, and sustainable foods is more important to me than strict adherence to an ingredient list. Therefore, you’ll see “leafy greens” on my list instead of “spinach”. I’d rather shop at the farmer’s market and get spinach one week and chard the next, instead of heading straight to the local grocery store for spinach, just because spinach is on the list and swiss chard isn’t. Conversely, I’ve specified ground beef explicitly (not just “beef”) because I know that local sustainable ground beef is readily available. If I know I can get it, it’s going to be specific. If it’s up to the whims of the produce gods, I’m likely to be more flexible.

Champion Diversity. I won’t repeat a dinner entree more than four times during any one season. The foodie in me craves endless variety, and while our family reaches for specific meals we love (I’m looking at you, tacos) I’m happiest when I taste the rainbow.

Stay in Season. Pretty self-explanatory. I’m sticking (primarily) with in-season vegetables that I can source from my local farmers market. There are a couple of exceptions – bananas (for smoothies), celery (essential for many dishes), and green beans and frozen peas. The last two are literally the only green things I can get my kid to eat, so they’re on the list.

Shop Local. I’m aiming to purchase 80% of my produce, meat, and dairy from a few local sources – the weekly farmers market, a storefront farmers market near-by called The Local Market, and my local organic butcher. Pantry items are always more challenging, as it’s considerably more economical to purchase those items in bulk at Costco or BJ’s. I’m willing, however, to at least consider the prices of local artisanal pastas, grains, and condiments. I’m going to track this and see how it goes. 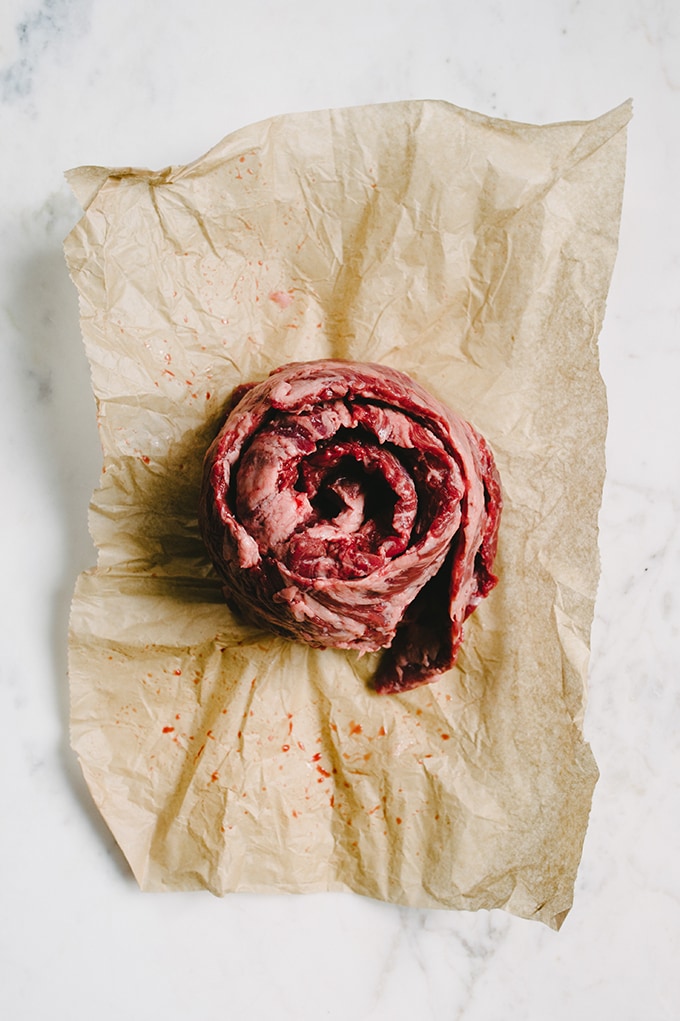 Choose Organic, Pastured, and/or Grassfed. When possible, these are my preferred choices. Since little bit’s arrival, the budget’s taken a hit. Babies are expensive yo. I’m not going to lie – a huge motivator in creating the Minimalist Foodie Challenge is to see if a shorter shopping list will enable me to buy the best possible ingredients at a lesser cost that what we’re currently spending. Again, I’m going to track it and report on my findings at the end of each season.

Use it Up, Wear it Out, Make it Do, or Do Without. Eat leftovers. You’ll see in my weekly meal plans that leftovers constitute the bulk of our lunch choices. One of the goals is to eliminate as much food waste as possible, and if there’s dinner leftover, we’re gonna eat it or freeze it for later. Same goes for scraps. I’m going to find some fun ways to use mushroom stems, citrus rinds, carrot peelings and more. I’m also going to commit to purchasing only 5 new kitchen supplies with a set budget of $200 total. I’m obsessed with kitchen gadgetry, but I need to be true to “Wear it Out” or “Do Without”. When was last time I used that meat grinder anyway? Lastly, I’ll continue to rely on external recipes to round out my own recipes, but I’m sure there will be modifications along the way to keep the ingredient list within the challenge guidelines. It’s gonna get interesting folks.

The Wild Card. I’m giving myself a weekly wild card – one item only per week. I never know when I’m going to find something ridiculously appealing at the market, and this is not an experiment in deprivation.

Pick a Treat. Again, this is not a punishment, but an experiment in mindfulness. One treat per person, and it has to be the same for the duration of the challenge. My weakness is super dark chocolate. Cam’s is ice cream. 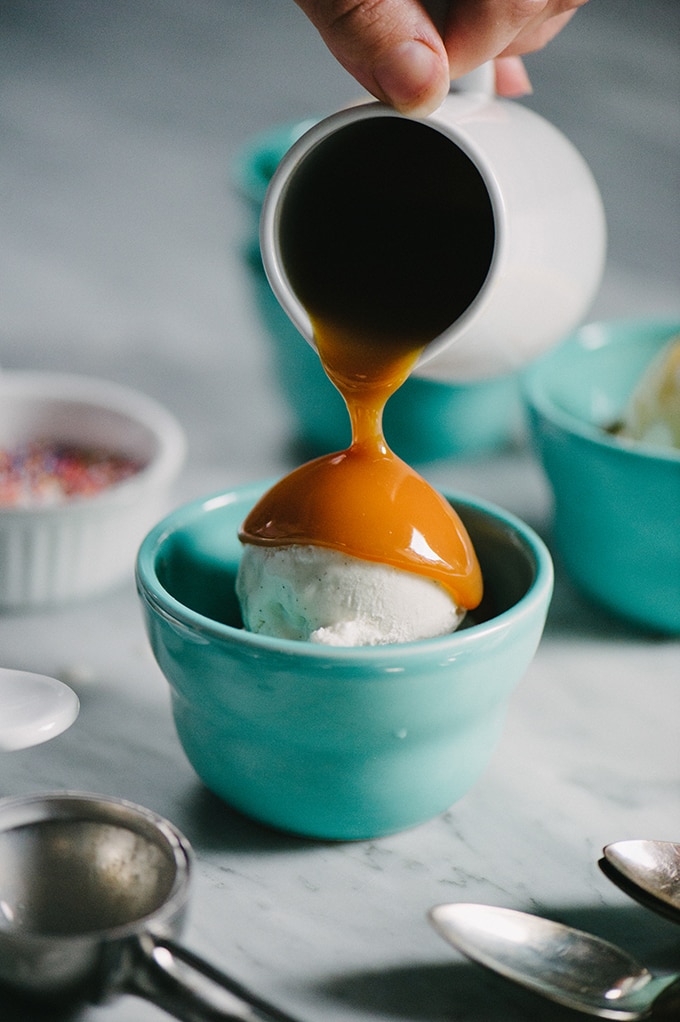 Kids Get Special Treatment. While my husband is on board with this challenge, there is no freakin’ way I’m going to get the Big Kid to go along. He’s just too picky. I tried so hard to groom him into a child foodie, but alas, he is his own person, and his go-to preferences are PBJ and mac n’cheese. That being said, I’m going to stuff as many whole foods as possible into his gullet and continue to introduce him to as many new foods as he’ll allow. What I’m purchasing for him off-list is relatively limited – sun/almond butter, jam, dried fruit, mac n’cheese, cheese crackers, frozen blueberries, and apples/pears as long as they’re available at the market(s). The baby will be interesting. He’ll be starting limited solid foods in about a month, so we’ll just have to see how it goes! There is still hope for a foodie baby in this family.

Have a Cheat Day. Sometimes I just need to order takeout. Or celebrate a birthday at a fancy restaurant. Or dad’s in town, and he wants to take us to dinner. We’ll have a cheat day a maximum of twice per month. I have an eating out budget, and I’m not about to waste it.

Travel Doesn’t Count. ‘Nuff said. Traveling is hard enough, so if we happen to go out of town, we’ll make do with what’s available. I have a girls weekend planned for February, but other than that, nothing on the books for the Winter quarter, so it should be somewhat limited. On the other hand, Cameron and I are going to Spain in August, so all bets are off that week.

And that, my friends, is all she wrote.

Thoughts? I’d love to hear your feedback! If you’re interested in participating, let me know so we can chat to share ideas. I’m considering creating an easy eBook that includes recipes and shopping lists. The book/guide will enable you to follow the challenge alongside me (granted, you’ll be limited to the menus I’m using, but it might be fun!). If you’re interested in this, get in touch so that I can work on it sooner than later. Not interested in participating? That’s cool too. I’ll still be posting delicious recipes every week for you to enjoy!