This Green Soup Recipe is refreshing and surprisingly hearty. Made with spinach, chard, and chicken bone broth it’s brimming with vitamins and minerals. It’s very paleo and Whole30 friendly, but can accommodate vegan and vegetarian diets too. This nourishing, vibrant detox soup is a recipe that’s made for Mondays!

Back in the stone ages (aka my 20’s) I worked as an event planner at a DC restaurant group. One of the things I loved most about that job – aside from the amazing food on-demand – was working on Saturdays. Sounds crazy, right? But the office was quiet, and I could crank through three days of work in a single morning.

But the best part was my series of mini-commutes. The restaurant group had four locations and I generally spent the better part of the afternoon driving between locations to prep for the following week.

While traffic in DC is generally a bear, it’s downright pleasant on a Saturday afternoon. And plenty of time in the car meant plenty of time to listen to The Splendid Table – the greatest talk food show of all time. Lynne Rossetto Kasper (pardon my language if you ever see this Lynne) is the shit. I was sad to hear that she’s retiring this year, but she’s earned it (in spades). Besides, her legacy will live forever to infinity and beyond in my podcast playlist.

It was during one of these drives that I was introduced to the concept of green vegetable soup. I’ll admit it – I was skeptical. Cameron doubly so.

Admittedly, I made a great number of things in those early days of our marriage that we both tasted with a healthy dose of trepidation. New kitchen experiments could be hit or miss in those days, and while many of my adventures went straight into the trash, this one pleasantly surprised us both. Detox green soup for the win!

Over the years, I’ve nipped and tucked and swapped and tweaked this recipe as I am wont to do, and I’m pretty darn pleased with this current version. I keep it fairly simple with a garnish of mint leaves and heavy cream to keep the taste earthy but bright.

This spring green soup is loaded with vitamins (thanks greens) and minerals (thanks bone broth), making it one of my go-to recipes for staving off a cold or getting back on the wagon after a weekend of indulgence. It’s a spring detox soup that’s made for new beginnings!

Pin it now! Click here to pin this Green Soup to your Whole30 or Paleo Recipes Board on Pinterest!

This detox green soup recipe is a terrific blank slate to customize to your palate and pantry. Here are some of my favorite suggestions.

You need a (not literal, but close) crap-ton of greens for this soup (about 2 pounds), but the ones you use are entirely up to you.  I prefer the classic combination of spinach and swiss chard, but kale, collards, and mustard are all fair game. If using a green that takes longer to cook, like collards, be sure to add it before the fast-cooking greens to keep those flavors and colors bright. Every once in a while I throw in a few handfuls of radish greens.

Just be mindful to balance the flavors. Mustard and radish are peppery and a bit bitter, so temper them with something more mild, like a combination of spinach and beet greens. This is a terrific recipe for using up odds and ends of greens, like the aforementioned beet and radish greens. I’ve even used carrot tops. The produce bin is your oyster.

I use homemade chicken bone broth in this recipe and I highly recommend you do the same if you’re not vegan or vegetarian. You can use boxed chicken broth, but the finished soup isn’t going to have the same velvety texture that you’ll achieve with the gelatin from the homemade stock. This is also terrific with homemade vegetable stock.

Herbs and spices can dramatically change the flavor profile in this soup, as can the garnish. Experiment with adding fresh parsley, cilantro, or basil (add half a cup along with the greens).

Try adding curry, cumin, or turmeric (about a teaspoon along with the leeks). I garnish with a tiny splash of heavy cream, but you can easily omit and substitute coconut milk, unfiltered extra virgin olive oil, truffle oil, or chili oil.

Did you make this Detox Green Soup? I’d love to know how it turned out! Leave a comment and a rating below. 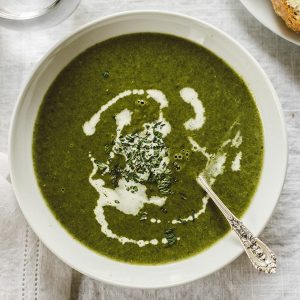