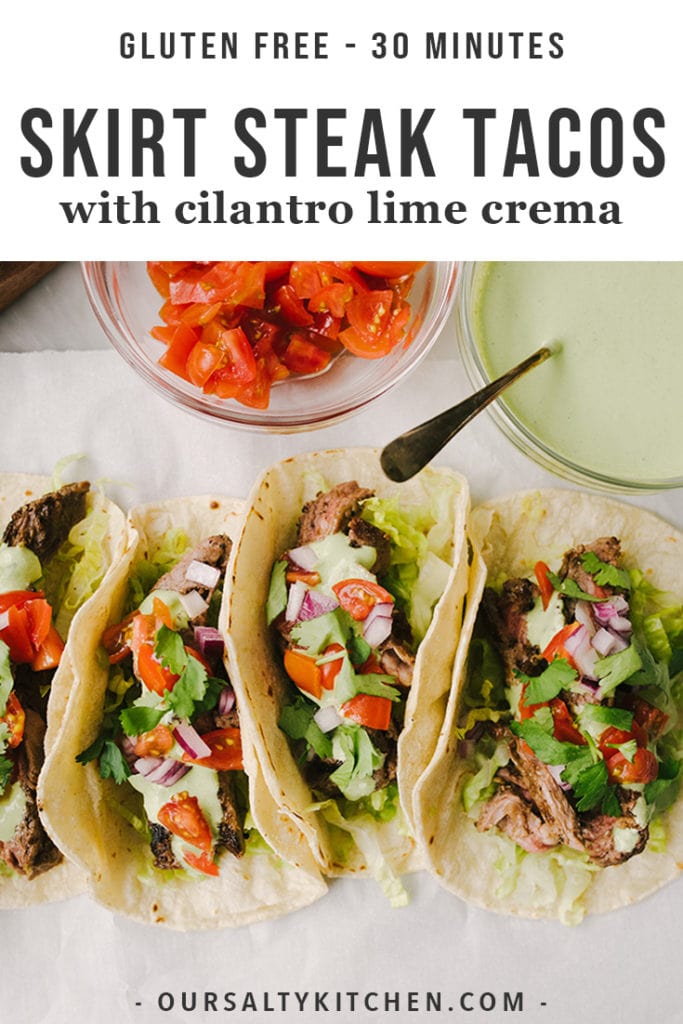 These skirt steak tacos are happening, and trust me when I say you want to get one of these guys into your face ASAP. They’re fast, easy, and packed with SO MUCH FLAVOR. Run, don’t walk, to the kitchen for this Taco Tuesday delight! 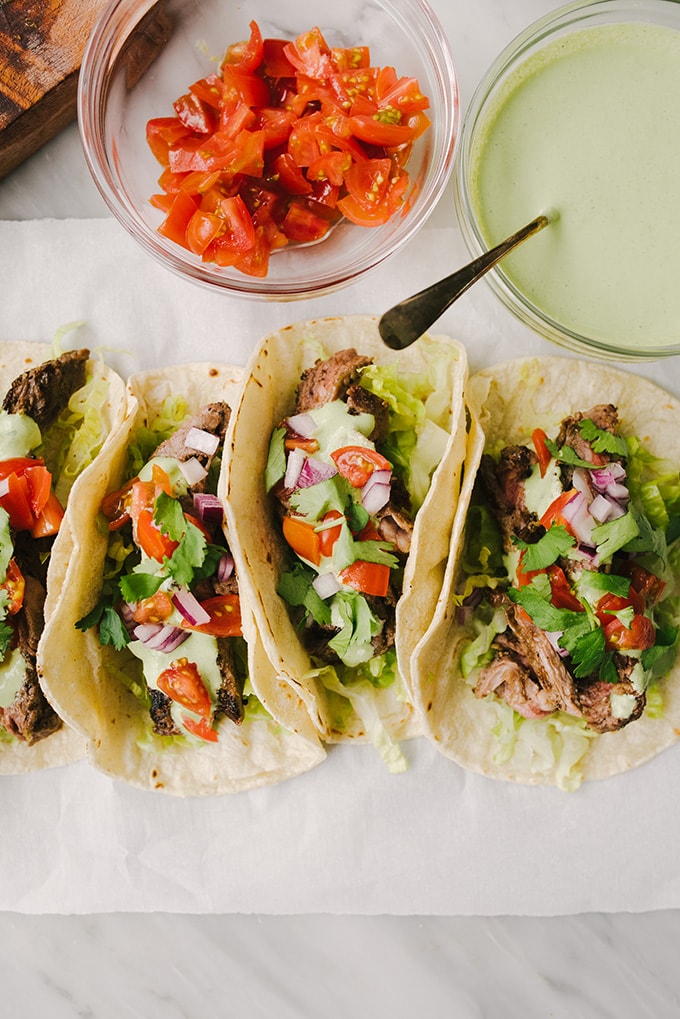 It’s Taco Tuesday – wheeeee! In honor of this glorious weekly occurrence, I give you this updated, tastier, eat-the-rainbow-ier version of my skirt steak tacos. I originally published this recipe late last spring, but after making them again recently, I tweaked things a little, as I am wont to do. So it’s time for an update!

We love tacos. We even have an entire pinterest board dedicated to ’em. They hit our menu at least every other week, and on the weeks I don’t make them, we go out for them. While my go-to recipe will always be the classic american-style ground beef variety, these grilled skirt steak tacos are a mighty fine runner-up. 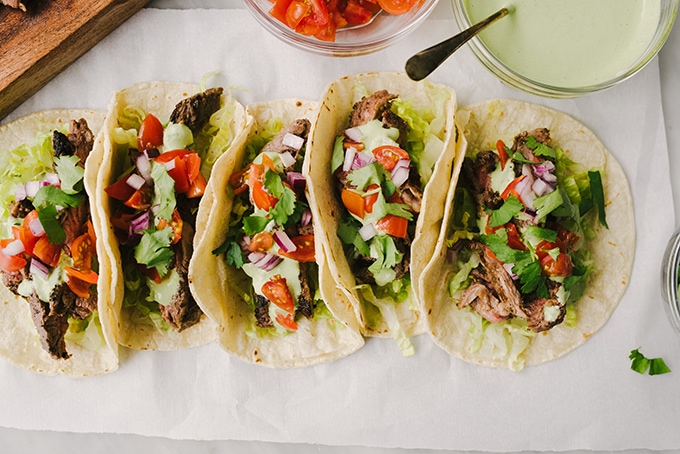 When we lived in Arlington, Cameron and I frequented a tiny little Salvadorian restaurant in our neighborhood. It was the scene of the crime for our first date-but-not-a-date. It’s the first restaurant we brought Cass to after he was born. It’s a place I craved endlessly while pregnant with Asher, and I’m pretty sure we took every out-of-town visitor we ever had for a meal there. La Union holds a very special place in my foodie heart. 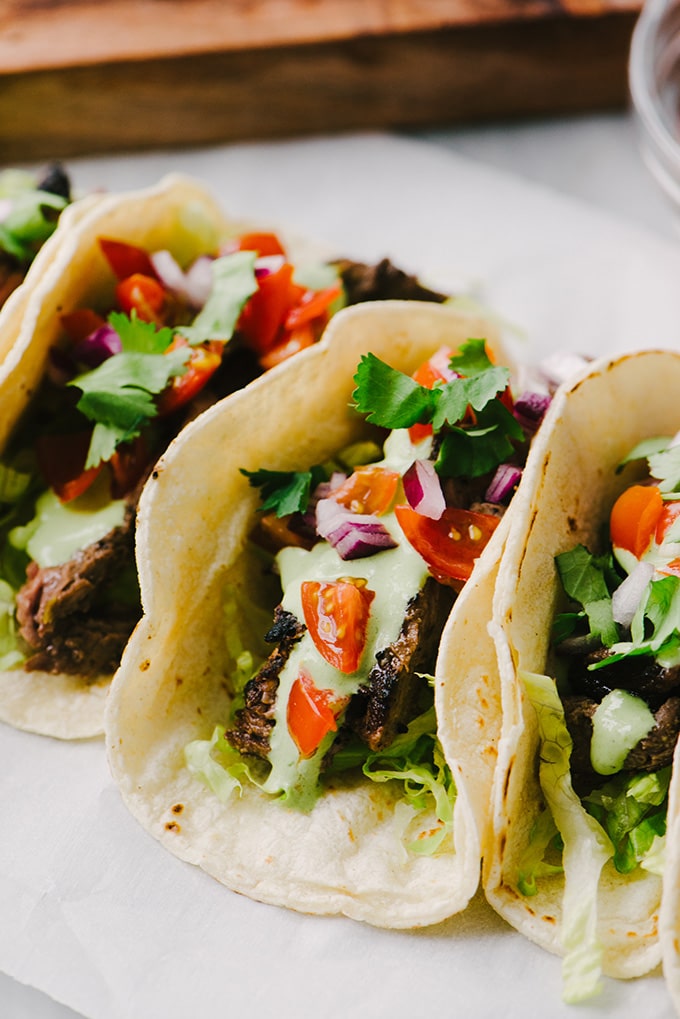 There’s nothing particularly special about this place, but the food is reliably great and the owners and staff are good people. We almost always ordered the same dish – Carne Asada for me and El Tipico for Cameron. Sometimes we shared pupusas, and margaritas (rocks, salt) were standard issue. These grilled skirt steak tacos are an homage to our beloved neighborhood haunt.

I marinate skirt steak in a quick and easy blend of carne asada inspired spices, olive oil and lime juice, then slap ’em on the grill them until they’re charred on the outside and crispy on the inside. The steak is super flavorful, and it doesn’t need much to make it better. But I kick up the fancy factor just a touch by drizzling them with cilantro lime sour cream.

Seriously – these tacos are perfection. And kid friendly. And easy. We love them, and you will too!

Why Skirt Steak for Tacos?

Skirt steak is the perfect choice for steak tacos. It’s a relatively fatty cut, so it’s packed with flavor. The outside gets charred and crispy while the interior stays tender.

Skirt steak also cooks up quickly (just 3-4 minutes per side for medium to medium rare), and as far as steak goes, you can’t beat the price.

The marinade is simple and easy, but jam packed with flavor. You’ll need to marinate the steak for at least an hour, but longer is better. Take 5 minutes to whip up the marinade in the morning, then tuck it into the fridge before work – it’ll be perfect by the time supper rolls around. 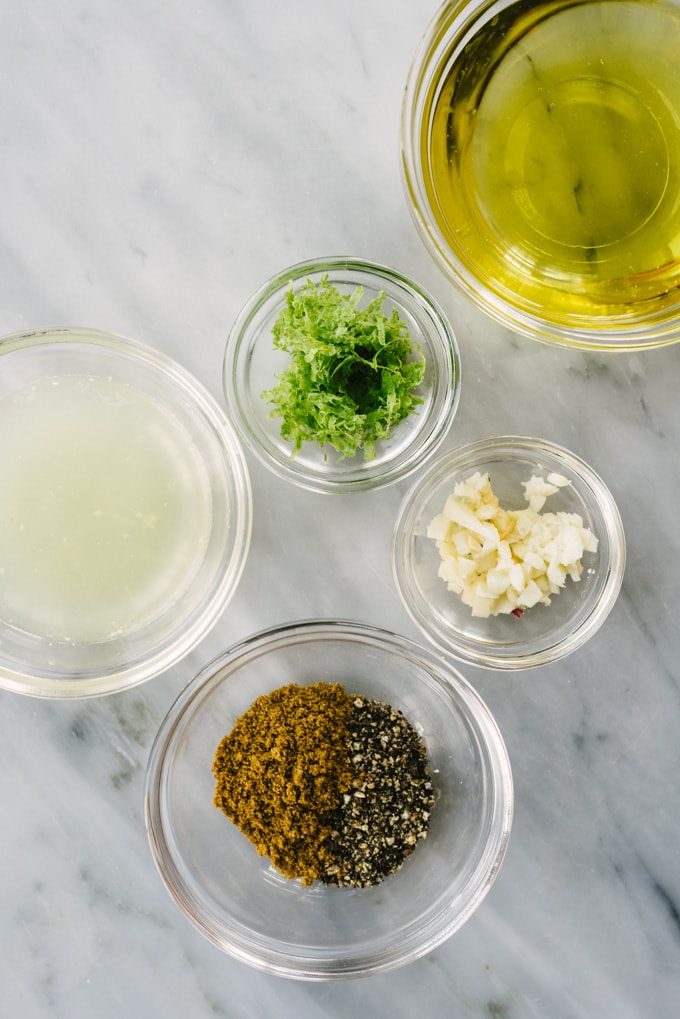 If you want some extra heat, toss a sliced jalapeño or two into the marinade. The kid can’t take the heat, so I skip it.

How to Grill Skirt Steak Tacos

When you’re ready to tackle taco Tuesday, remove the steak from the fridge and set it on the counter to come to room temperature while the grill or skillet heats up. There’s no need to rinse the marinade from the steak before cooking – you’ll get more flavor and more crunchy bits.

The steak cooks up perfectly on a grill, a grill pan, or in a large cast iron skillet (I’ve used all three with reliably good results). Skirt steak is a rather long cut of meat, so if using a cast iron skillet or smaller grill pan, slice the steak in half before marinating. It’s easier to cut it at this point in the process, and you’ll fit each half side-by-side onto the grill pan or skillet perfectly.

Grill the steak 3-4 minutes per side for medium-rare to medium. Then allow the steak to rest, and slice it against the grain for thin, tender slices of skirt steak. 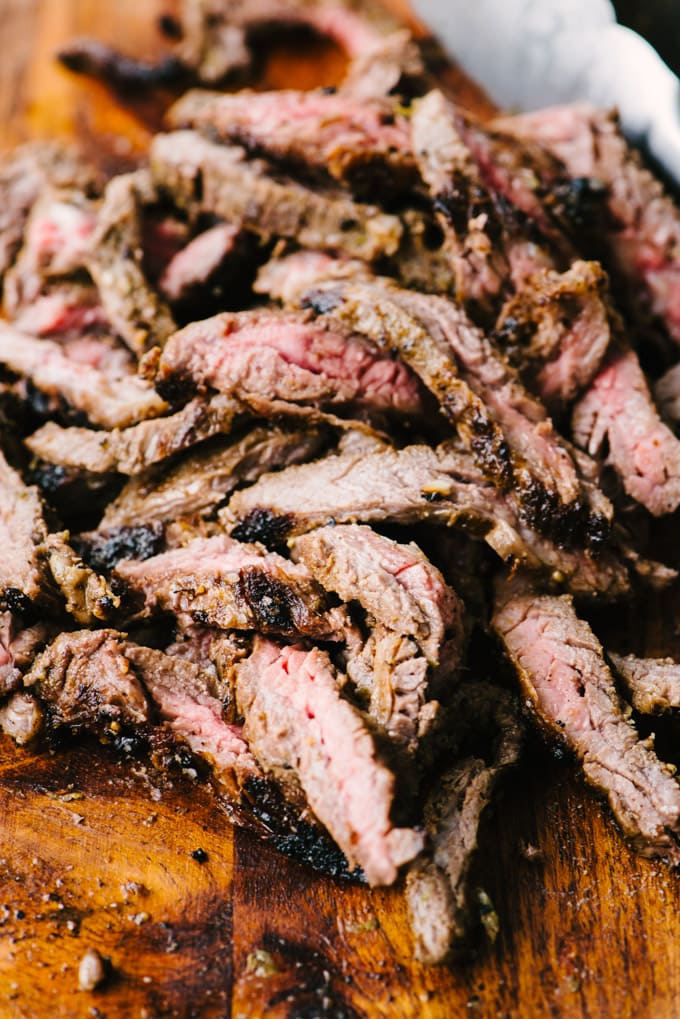 To make these skirt steak tacos just a little extra special, I drizzle them with cilantro lime crema. It’s so easy to make and really punches up the flavor.

Toss some sour cream, cilantro, and lime juice into a blender, whiz it up, and then fold in even more sour cream and some lime zest. Don’t put all of the sour cream into the blender. I know, it’s tempting. but it’ll be too soup. Fold the second half in for a thick, drizzlable sauce. Super easy. Incredibly tasty. 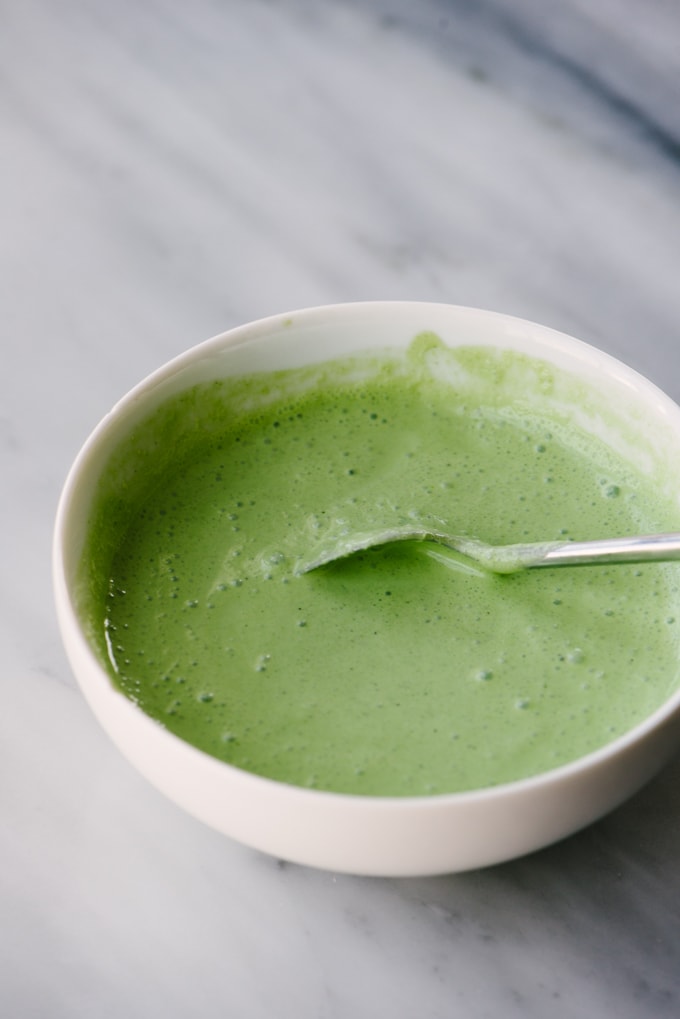 I always have leftover cilantro crema, and you probably will too. For a quick breakfast the next morning, toast a piece of bread, slather on some avocado, slap on a fried egg, and drizzle some crema and cracked black pepper on top. You’re welcome.

I serve these with a variety of different toppings – queso fresco, avocado, shredded red cabbage or romaine lettuce, fresh slices of jalapeño, pickled jalapeño, red onions, diced tomatoes…you get the picture. Garnish away. 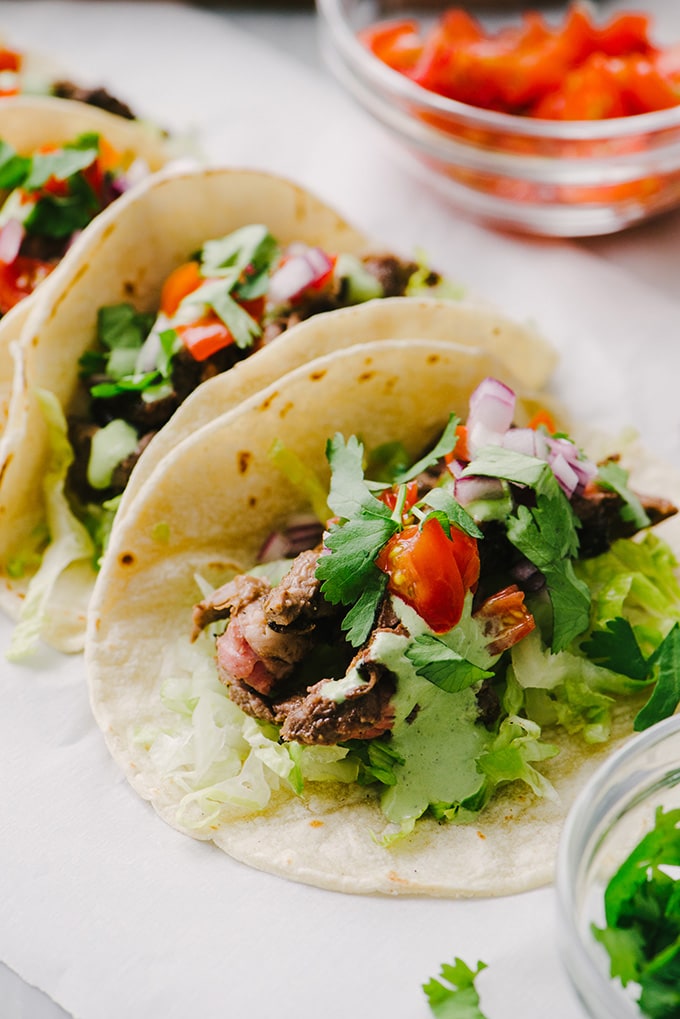 PIN IT NOW, MAKE IT LATER! CLICK HERE TO PIN THIS SKIRT STEAK TACOS RECIPE to your Taco Board on Pinterest!

WHILE YOU’RE AT IT, LET’S BE FRIENDS! FOLLOW ME ON PINTEREST FOR MORE EASY, SEASONAL RECIPE IDEAS. 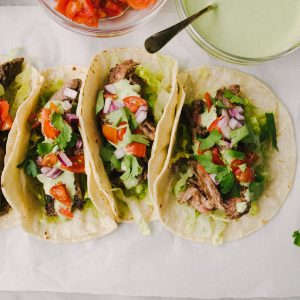 Serve these with seasonal topping to your preference, such as:  Nutritional information represents 2 tacos per person with 1 tbsp of cilantro lime crema per taco. Toppings are not included in nutritional calculations.