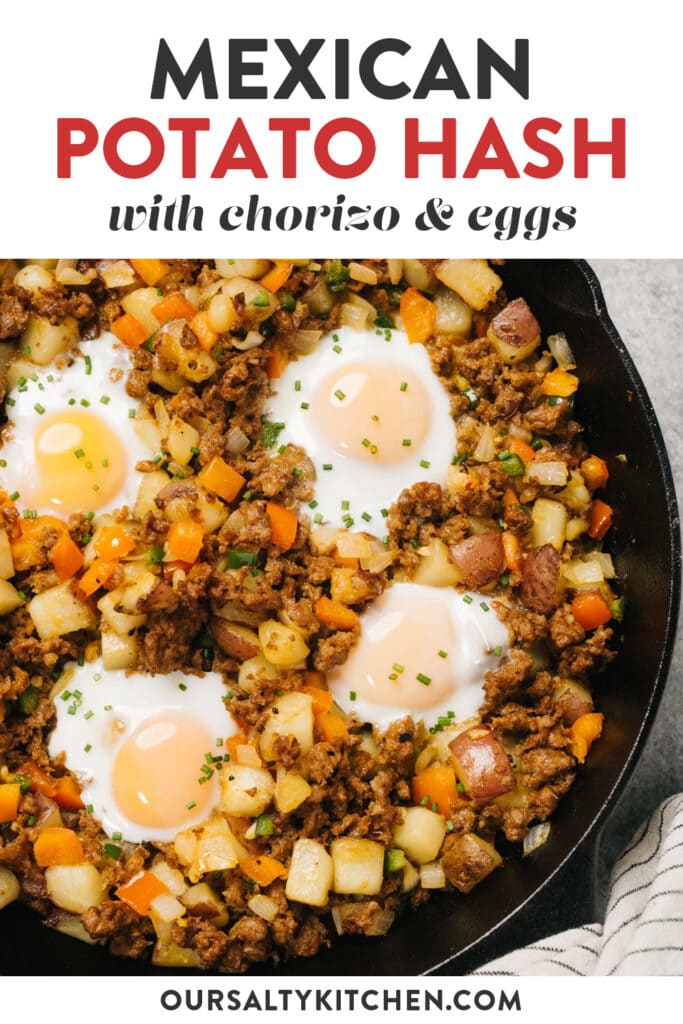 Say yes to the mess! Mexican Potato Hash with Chorizo and Eggs sure ain’t pretty, but boy does it have a good “personality.” Pan-fried potatoes make the perfect crispy – yet pillowy – base for this savory hash. Smoky chorizo and jalapenos add a welcome spicy kick, while baked eggs lend a creamy finish. This paleo and Whole30 recipe is equally bold at breakfast and super at suppertime.

I’m admittedly becoming more and more obsessed with hashes. Y’all know I love tasty comfort food that gives you the warm fuzzies. And you know I’m a huge proponent of all-day breakfast. But what’s been doing it for me lately is that hash, well… I’m just gonna say it – because there’s truly no way to put it politely – but to me, hash is the meal equivalent of zero f*cks. And I don’t know about you, but I am at the point in this seemingly never-ending pandemic where I have less than zero of those left.

Now let me clarify before you think I just put a bunch of crap in a skillet and warmed it up. (I’d walk away from my shining food empire on this salty hill before I ever phoned it in on you, dear reader.) A centuries-old way to use up leftovers, hash is the path of least resistance to culinary satisfaction. It’s a state of mind. One step up from the hobo skillet and the garbage plate. It’s about embracing and working with what you’ve got (and in most cases making it even tastier by dredging it in salt and fat.)

I once asked a friend of mine (who’s an above average cook) for suggestions on how to use leftover pot roast for this very blog. She laughed and said “You couldn’t use it publicly or professionally… but I like to saute up peppers and onions, slice the beef real thin, crack an egg in it, fry it all up and then smother the entire thing in Cheez Whiz. You know… like a hash.”

And you know what? That’s the exact spirit I’m here for. Just with different ingredients. Cause zero f*cks doesn’t have to mean zero class.

Cook the hash completely, but do not add the eggs. Store in the fridge for up to 5 days in an airtight container. Reheat on the stovetop to re-crisp, then top with a fried or poached egg (cooked separately).

Did you make this Mexican Potato Hash with Chorizo and Egg? I’d love to know how it turned out! Leave a comment and a rating below. 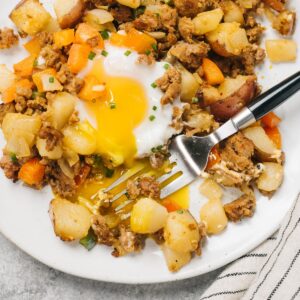 Make ahead:  make the hash through step 6. Cool, then store in the fridge. Reheat an individual portion in the microwave or in a skillet until crips, then top with a fried or poached egg.