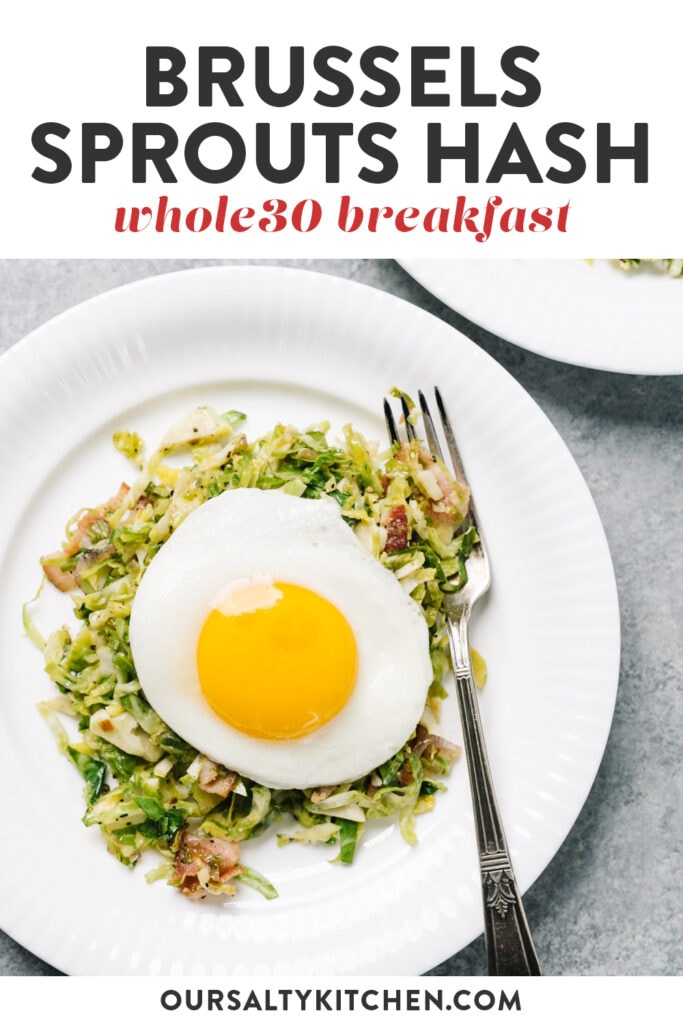 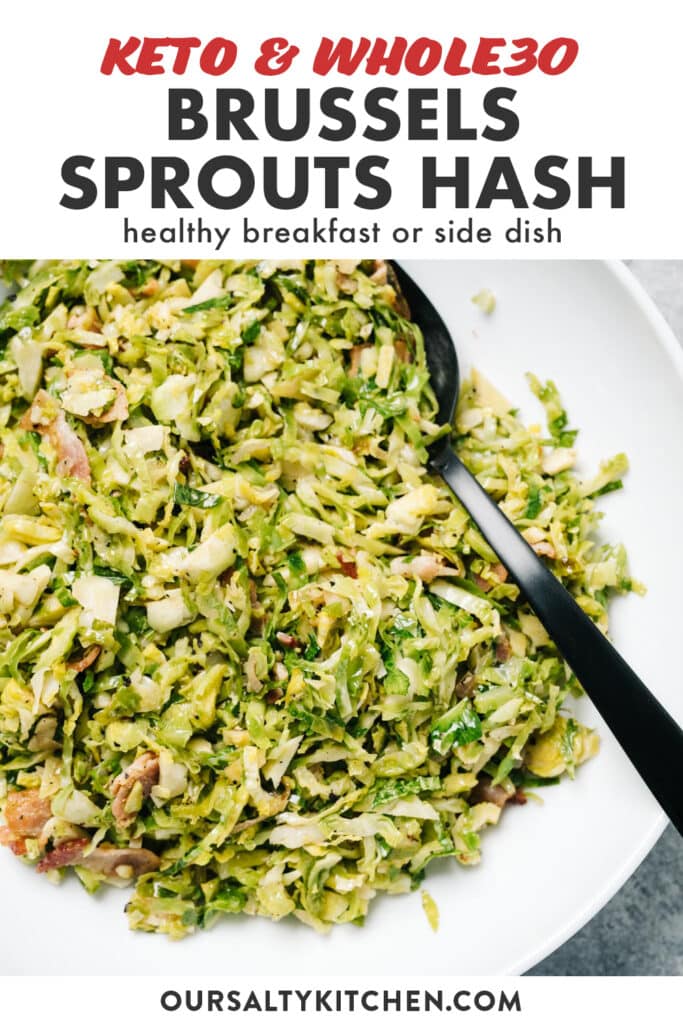 Veggies in the mornin’, veggies in the evenin’, veggies at suppertime. Brussels Sprouts Hash is a fast and fresh way to get an energy-boosting dose of veggies and protein, not to mention flavor! Ribbons of brussels sprouts sautéed with bacon get topped with a runny egg for a perfect anytime meal – plus it’s keto, paleo, and Whole30 compliant.

Slowly, but surely, even my kids have grown to (what’s the word I’m looking for…) accept them as much as any child can accept something that is not a dinosaur shaped chicken nugget. (Don’t @ me. Yes, I’ve absolutely placated whiny tots with chicken slurry pressed into fanciful shapes.) But even they will devour brussels sprouts for the same two reasons most of us do:  bacon and vinegar.

Bacon is bacon. Do I need to say more? I believe it was Benjamin Franklin who once famously said “In this world nothing can be said to be certain, except death and bacon.” It makes everything better.

But almost (dare I say it) even more important in the journey to loving brussels sprouts is vinegar. Why? Because vinegar is the magic sauce that counteracts the naturally occurring sulfuric taste that these particularly pungent members of the Brassica oleracea family (e.g. cabbage, cauliflower, broccoli) can give off. It’s an especially important ingredient as you learn to cook them properly. It’s when you overcook them that things can get really…swampy.

But to be fair, adding vinegar, as you will in this Brussels Sprouts Hash recipe, is not just a bit of kitchen alchemy – it’s also damned tasty. (There’s a reason roasted brussels sprouts with balsamic is a classic.) Especially when it blends with creamy egg yolk… and smoky bacon fat… aaaand I just drooled all over my keyboard.

How to Shred Brussels Sprouts?

Trim the end of each sprout, then peel away any bruised or discolored leaves. Slice each sprout in half lengthwise (top to bottom), then place cut side down on your cutting board. Starting at the tip, slice each sprout crosswise into ¼″ ribbons to create shreds.

How do I Avoid Bringing Out the Sulfuric Taste in the Brussels Sprouts?

Simple. Do. Not. Overcook. Especially since you’re shredding for this recipe, the thinly-sliced leaves will tenderize in no more than 5 minutes.

Is This Recipe Keto?

It sure is! Resist the temptation to soak up the egg yolk with bread (the tender sprouts will do that for you!) and one serving has only 9 net carbs (chock full of fiber from the sprouts) and 14 grams of protein.

Did you make this Brussels Sprouts Hash? I’d love to know how it turned out! Leave a comment and a rating below. 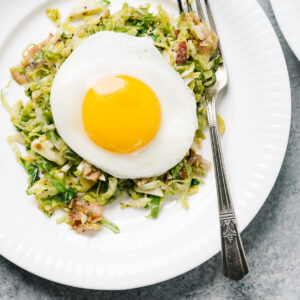 Make Ahead:  The hash can be prepared completely in advance through step 3. To reheat, remove the lid and microwave an individual portion for 60 seconds. Prepare the fried egg fresh, and top the warmed hash with the fried egg.