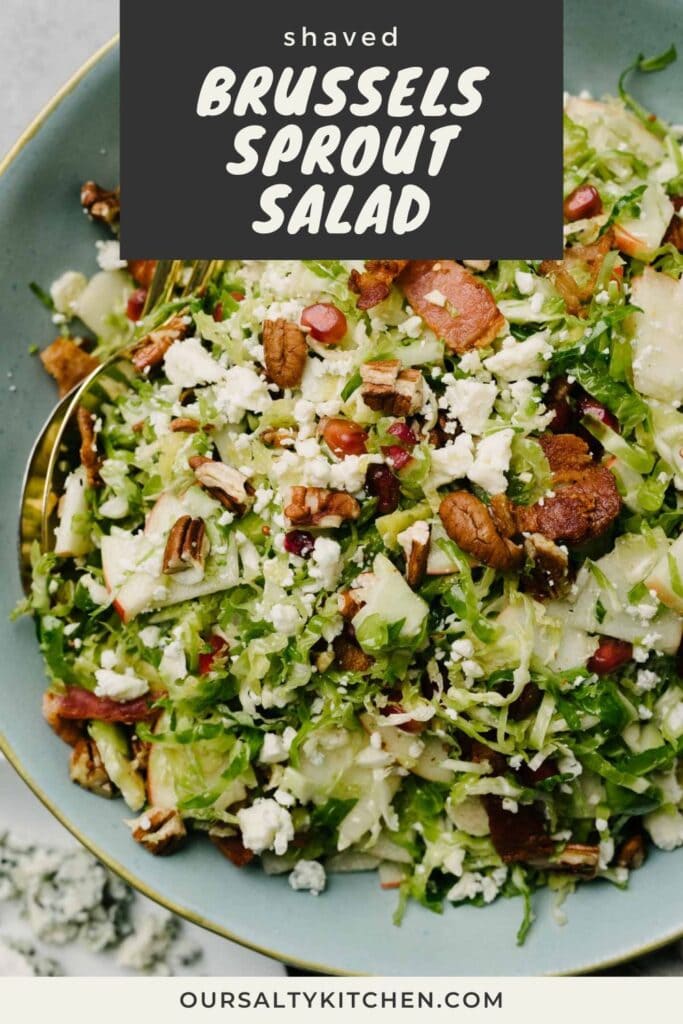 If you cheer for chopped salad, then you’re gonna scream for a shredded salad. Shaved Brussels Sprout Salad has got bite, and plenty of it! From crisp apple and crispier bacon to tangy blue cheese and tart pomegranate seeds, there are flavors and textures galore to love. Dress it all up with a homemade apple cider vinaigrette for the perfect seasonal side salad.

You can usually find them drenched in something like Buffalo Sauce or served shredded and “extra crispy.” (Reader, theirs are rarely crispy – but these shaved Brussels sprouts are!)

While I don’t give a hoot about most middling bistro menus, I do care deeply about getting my greens year-round, so I’m just happy that Brussel sprouts are in regular rotation from Thanksgiving through Easter. Everyone loves a classic, like sautéed Maple Bacon Brussels Sprouts, but did you know that you don’t need to cook sprouts to enjoy them?

Raw, shaved Brussels sprouts make for some of the best cold weather salads, and I’ve got the data to back that up. While crisp greens will never go out of style, shredded sprouts make a much more interesting salad partner for special meals.

This kale and Brussels sprouts salad makes an appearance at every winter holiday gathering (seriously, that hazelnut vinaigrette alone is worth the effort) and this shredded winter salad is so good you’ll think greens might just be a replacement for dessert (they’re not, but it’s fun to pretent, right?).

Over time, I’ve found that while I like the added greens, I don’t necessarily need them. Brussel sprouts stand on their own in a salad when mixed with other complementary tastes and textures. And this one has it all – sweet, tangy, crispy, crunchy, soft, and punchy.

Are Raw Brussel Sprouts Good for You?

Look, we’re all adults here so let’s not beat around the bush. Brussels sprouts are most definitely nutritious – high in fiber, vitamins C and K, and antioxidants, no fat, low carb, etc. – but you’re not really asking that, are you? You’re asking if they’re edible because you think raw sprouts are tough and bitter and frankly, there are things you’d prefer to be eating that don’t make you fart. There. We said it.

Though not to everyone’s taste, if you’re a fan of arugula, radicchio, endive, or any other bitter greens, don’t sleep on sprouts in your salads. Raw Brussels sprouts are perfectly edible, and downright delish when prepared and dressed properly. The hint of bitterness they give off blends really well with other flavors, especially when those other flavors are complimentary ones like bacon and vinegar.

How to Cut Brussels Sprouts for Salad

Thinly shaved or sliced Brussels sprouts are the only way to serve ’em raw. No matter your preferred method for shredding or shaving, start by trimming the end off each sprout and then peeling off any bruised or discolored outer leaves.

Can I Use a Bag of Shaved Brussels Sprouts?

You sure can! If you can find shredded Brussels sprouts at your local grocery store, they’re a perfectly fine substitution in this salad recipe. Just keep freshness in mind – inspect the bag for any mold, too much moisture retention, or yellowed or withering sprouts.

Can I Prep Brussels Sprout Salad in Advance?

You can, but this salad isn’t exactly the best to make ahead. First, focus on the parts – not the whole. You can shred the sprouts in advance and harvest the pomegranate seeds. You can slice the apple, but you’ll have to use lemon juice to prevent it from browning. Note that each ingredient should be stored individually.

The vinaigrette can also be made in advance, but you’re going to have to put some elbow grease back into it to reconstitute so you may as well make it fresh.

Bottom line, it’s fine to prep the produce in advance, especially the sprouts and the seeds, but overall, since it’s not going to save you much time and it may impact flavor, we’re not sure it’s entirely worth it.

How to Store Leftovers

The nice thing about raw sprouts is that they’re hardier than other leafy greens, so they don’t wilt nearly as fast – even once they’re dressed! You can store leftovers in a sealed container in the fridge for 1-2 days, but this salad is at it’s very best freshly made.

Did you make this shaved Brussels sprout salad? I’d love to know how it turned out! Leave a comment and a rating below. 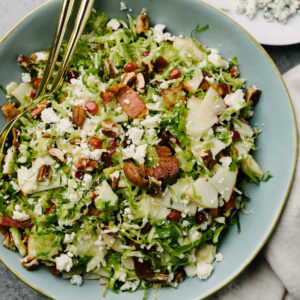