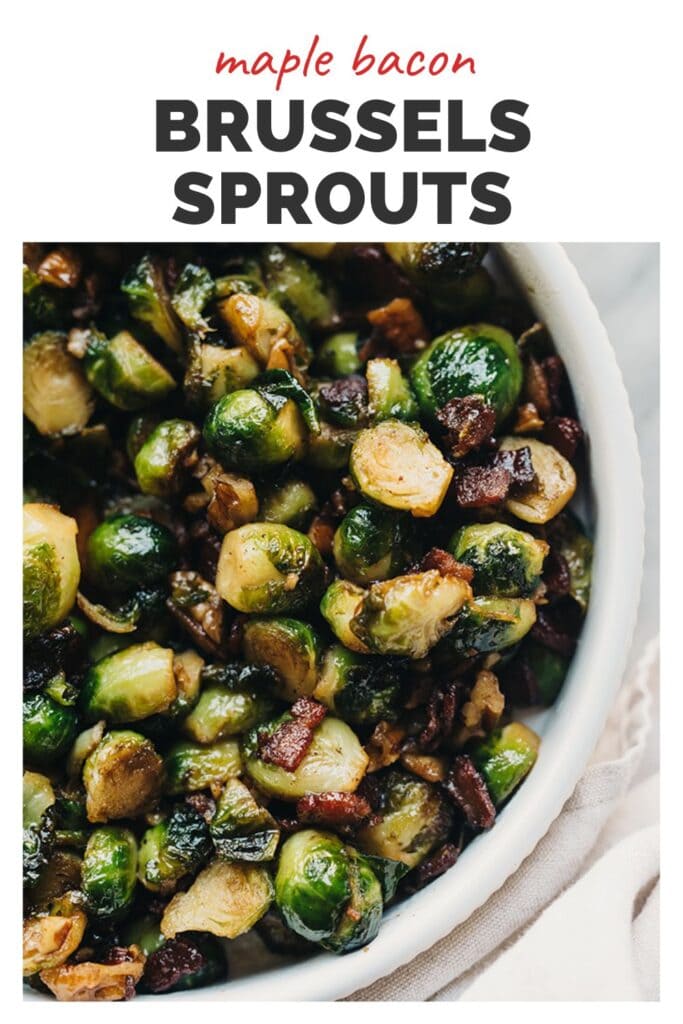 An impressive Thanksgiving side dish need not be time intensive, nor terribly difficult. Maple Bacon Brussels Sprouts with crunchy pecans and a dash of bourbon (optional, but delicious!) are super easy, but a total showstopper both in flavor and presentation.

They can be partially prepared in advance, and then finished in less than 15 minutes. A Thanksgiving dinner (or really any dinner) side dish winner!

Bacon and brussels sprouts and maple syrup and bourbon, oh my!

These are most definitely a few of my favorite things. And if you’re reading this post, they’re probably some of yours too, which means we can totally be friends. A friend who shares her bacon is a friend for life. BFFs = Bacon. Friends. Forevah.

And if you don’t? Well, you just might need bacon and bourbon to make ’em palatable. And you’re in luck!

Maple bacon Brussels sprouts are both sweet and savory; crunchy and tender; and oh so very pretty to look at. The best part? This recipe is really easy to make – even for beginners!

BOURBON SUBSTITUTION: If you don’t consume alcohol, or don’t want to use bourbon, replace it with two tablespoons of apple cider vinegar.

How to Cut Brussels Sprouts

Before you even get started, be sure to use sprouts that are (roughly) the same size – this way they’ll cook evenly, at the same rate! The only thing worse than a mushy sprout is an undercooked sprout, and uniformity from the start will make the job that much easier.

With maple syrup, bacon, and pecans, this Brussels sprouts recipe has a little something for everyone. Start by blanching the Brussels sprouts in salted water, then finish them on the stove – this method creates tender interiors and crisp edges. The bourbon is optional, but recommended. You can substitute for apple cider vinegar if you don’t cook with alcohol.

If you’ve ever tried to slice bacon with a chef’s knife, it’s sort of a cumbersome process. Use kitchen shears instead! It makes for quick, efficient work.

Can I Make This Recipe in Advance?

Blanch the Brussels sprouts, then plunge them into an ice bath. Drain, then store in a sealed container in the fridge for up to 24 hours. Cook in the skillet as directed 15-20 minutes before you’re ready to serve.

Did you make these Maple Bacon Brussels Sprouts? I’d love to know how they turned out! Leave a comment and a rating below. 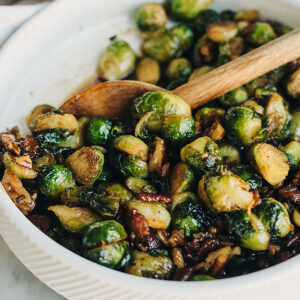 5 from 8 votes
Author: Danielle Esposti
Print Recipe Rate this Recipe Pin Recipe
With maple syrup, bacon, and pecans, this Brussels sprouts recipe has a little something for everyone. Start by blanching the Brussels sprouts in salted water, then finish them on the stove – this method creates tender interiors and crisp edges. The bourbon is optional, but recommended. You can substitute for apple cider vinegar if you don't cook with alcohol.
Prep Time: 5 mins
Cook Time: 25 mins
Total Time: 30 mins
Servings : 6
Calories: 175

Make Ahead Instructions After you’ve blanched the Brussels sprouts, drain them well, then spread onto a paper towel or kitchen towel to thoroughly dry. Place them into a sealed container or ziplock bag and place into the fridge, where they’ll keep for about 24 hours. When you’re ready to serve, start with Step 2. The blanched Brussels sprouts can go straight from the fridge to the pan.