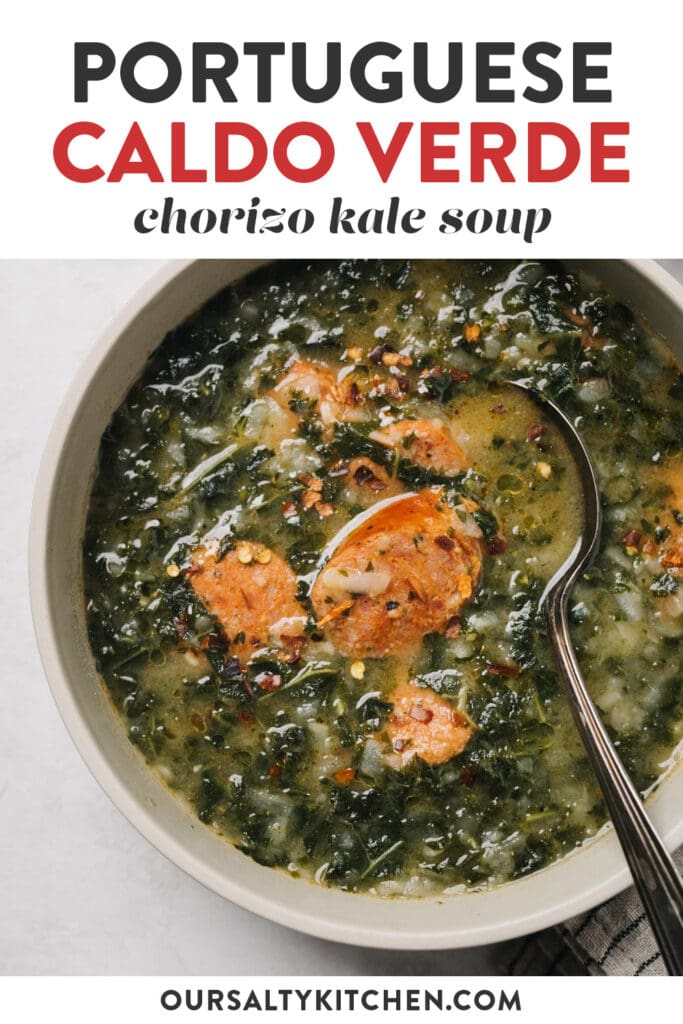 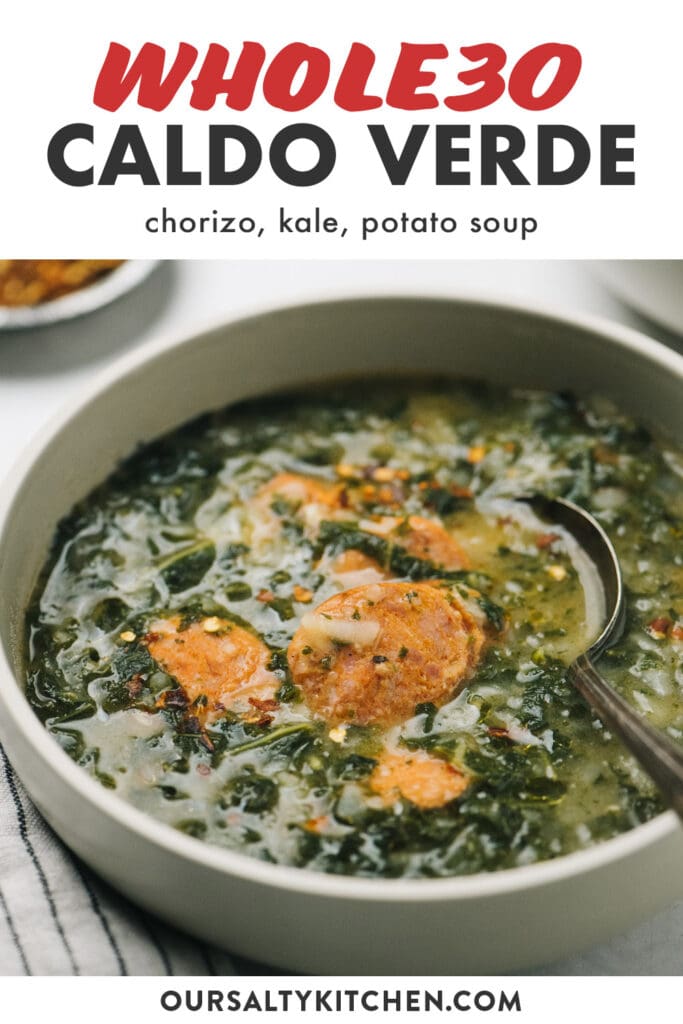 Love a creamy soup but don’t want the heaviness? I have two words for you:  Caldo Verde. This buttery, brothy soup gets its velvety texture from the natural starch in potatoes, but the real stars of the show are spicy chorizo sausage and leafy kale. Piqued with just a touch of red pepper flake, this is one winter warm-up you won’t want to skip!

I stumbled upon Caldo Verde years ago after a few attempts at upgrading a family recipe for Italian Wedding Soup. Some people add pasta, some don’t. Some people use meatballs, some use sausage. Heck, beans, carrots, cheese… there’s a long list of things people will toss in to improve on the classic.

Anyway, I googled myself down a windy rabbit hole and stumbled upon this traditional Portuguese recipe. And I was instantly hooked. What struck me was its simplicity:  potatoes, greens, and broth, topped off with smoked sausage. Reminiscent… similar, even. But also totally new.

More “main” soup than “side” soup, tuck into a bowl of this spicy green goodness to stave off the winter blues or beat back a cold. Or just to feel really, really cozy from the inside out.

What Is Caldo Verde?

The zesty Portuguese alternative to Italian Wedding Soup, literally translated “caldo verde” means “green broth,” a reference to the leafy greens used in this dish. There are as many “traditional” ways to make caldo verde as there are kitchens in Portugal, but the mainstays are very thinly shredded kale and potatoes cooked until they disintegrate for creamy-without-cream, velvety smooth broth.

Pro Tip: While the soup itself is gluten-free, it’s traditionally served with corn bread or rye bread as a complement.

What Kind of Sausage Should I Use?

If you can source traditional Portuguese sausages like chouriço and linguiça, please do use them. They bear the same traditional spicy vs. mild characteristics as sausage in any other culture, but what really excited me was learning that the secret to the heat in chouriço is piri piri – also known as peri peri, also known as that damn fine spicy seasoning on Nando’s Peri Peri Chicken. (If you don’t have Nando’s or haven’t had Nando’s, do yourself a favor, as conditions permit, and get some. And do NOT skip the Natas for dessert.)

There’s a not so pleasant history of colonization behind this pepper, and while the Portuguese developed it, its origins are in Africa, so credit where credit is due. Bottom line, it’s difficult to find Portuguese smoked sausage (and I live in a major metropolitan area) so if you can get your hands on it, do it! In the meantime, its Spanish cousin – a nice, spicy chorizo – will do just fine to add the necessary kick.

It’s All About the Texture

Now, now…no need to call for a welfare check – I’m fully aware there’s no dairy (or dairy imposter) in this soup and that seems a bit out of character for me, but hear me out. ‘Cause this soup feels rich. And it’s glorious.

Finely minced onion, shredded potatoes, and very thinly shredded greens are gently simmered to create a velvety broth and creamy without cream texture. You should cook the potatoes until they’ve released all their starch and start to fall apart. Thinly shred the kale and simmer until it’s completely cooked through. Feel free to puree a third or so of the soup using an immersion or stand blender to break down the plant fibers even further.

Did you make this Caldo Verde? I’d love to know how it turned out! Leave a comment and a rating below. 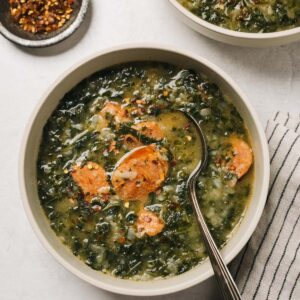 No ratings yet
Author: Danielle Esposti
Print Recipe Rate this Recipe Pin Recipe
There are "side soups," and then there are "meal soups," and Caldo Verde is definitely the latter. Portuguese Green Soup features kale and chorizo in a silken broth, thickened by Russet potatoes. Brown your sausage first to coax out the best flavor. Build your base by adding sautéed onion and garlic, potatoes, and kale into bone broth. Add your sausage after simmering, and serve it steaming with fresh bread.
Prep Time: 10 mins
Cook Time: 50 mins
Total Time: 1 hr
Servings : 6
Calories: 455