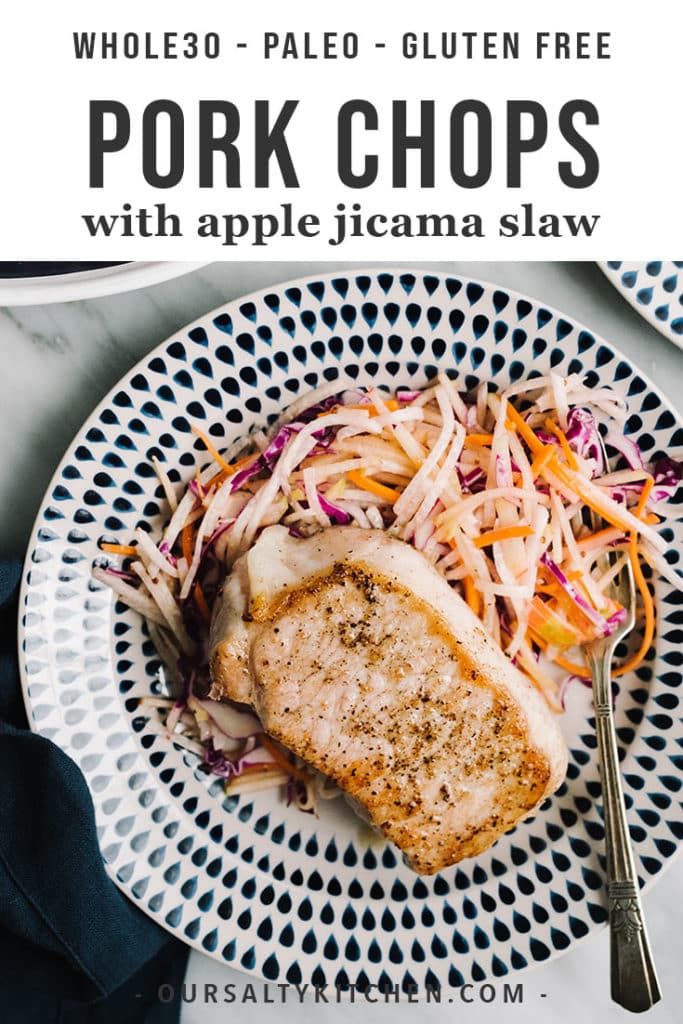 Juicy, tender oven roasted Pork Chops with Apple Jicama Slaw are the quick and easy weeknight dinner you didn’t realize you were craving – that is, until right now. These thick cut pork chop beauties cook up in no time at all, and are perfectly complimented by a crunchy, colorful, vitamin packed apple jicama slaw. An easy, clean healthy dinner that tastes ah-mazing? Coming right up!

About a year ago, my oldest boy Cassian asked me out of the blue to make pork chops. If you know anything about this child, you’ll appreciate how much of an achievement this was. I may have had a 90’s dance party in the kitchen to celebrate. Then again I may not have. You’ll never know.

Despite my sustained efforts over the last 8 years of his life, Cass sticks to an extremely limited menu. And as you may have suspected, pork chops ain’t on that list.

So being the exceptional mother I pride myself on being at least 15% of the time, I obtained and cooked some pork chops for my kid. I kept the prep super super with just a little pan-seared action and some butter and some seasoning. Dinner came around and I was super pumped.

The child took a bite, looked at me, looked at his plate, and then declared “No, mommy. No.” And promptly spit out the chop.

As you may have guessed if you have a child in the range of 7-10 years, he became obsessed with trying pork chops because of Minecraft. Unfortunately that pixelated piece of pork did not meet real-life expectations. Le sigh.

I set this experience aside into my ever-growing basket of mom-fails and continued on serving him roasted chicken and green beans for the next year.

Luckily for you, I recently dusted myself off, put on my big girl pants, and set upon the task of creating perfectly moist and tender pork chops, and by golly I’ve done it and I’m sharing it with y’all today.

These oven roasted pork chops are, to be perfectly frank, freaking amazing. So juicy. So tender. So packed with flavor. I again kept the seasoning simple to let the flavor of the pork shine, and then served these over a simple apple jicama slaw. Winner-winner, the-other-white-meat dinner!

How to Cook Moist and Tender Oven Roasted Pork Chops

Pork chops have an undeserved reputation for being dry, tough, and bland. But they needn’t be! Brining thick cut pork chops helps them retain moisture and seasons the meat from the inside out. The result is juicy, tender pork chops infused with earthy flavor. Serve them with a simple apple jicama slaw for an elegant, but easy, weeknight dinner.

This method for cooking oven roasted pork chops is easy and straightforward, but each step is an important piece of the process:

The first step in achieving oven roasted pork chop perfection is to brine the chops. I’m a huge fan of brining in all its forms, both wet and dry, and for these chops I went with a traditional water brine.

Prepare your brine, pour it over the chops, then tuck into the fridge for at least an hour. Feel free to add a few aromatics like peppercorns, fresh herbs, or a bay leaf if you feel like getting fancy.

When you’re ready to start cooking, preheat a cast iron skillet in the oven while the oven warms. This will help the cast iron get hot throughout, and help it retain that heat when you sear the chops. I strongly recommend cast iron for this preparation – it retains heat well (essential to achieving a crispy crust quickly) and it transfers from stove-top to oven beautifully. Plus cast iron is inexpensive and lasts a lifetime.

While the oven is heating up, remove the pork chops from the brine, pat dry, then lay onto a flat surface and season with salt and pepper. Thoroughly drying and warming the chops to room temperature will also help them achieve that crispy golden crust (wet chops will steam, not sear).

Remove the skillet from the oven once it comes up to temp (be sure to use oven mitts, safety first!), then place it on a burner over high heat. Coat the pan with oil liberally (you need more than you think), then add the pork chops to the skillet and sear until a golden brown crust forms. Flip the chops over, and immediately put the skillet into the hot oven.

Bake the pork chops until the internal temperature registers 140*F with an instant read thermometer. Total cooking time will depend on the thickness of the pork chops, and the ones pictured above took about 8 minutes.

Remove the pork chops from the skillet, set aside on a plate, and let them rest for about 10 minutes before serving.

This slaw is a colorful combination of crunchy jicama, crisp apples, carrots and red cabbage with a zippy apple cider mustard vinaigrette.

This slaw takes just a few minutes to toss together, and I easily made it start to finish while the pork chops were roasting and then resting. Pre-shredded cabbage and carrots helps speed things up, as done a mandoline vegetable slicer for the apples and jicama.

Did you make these Oven Roasted Pork Chops? I’d love to know how they turned out! Leave a comment and a rating below. 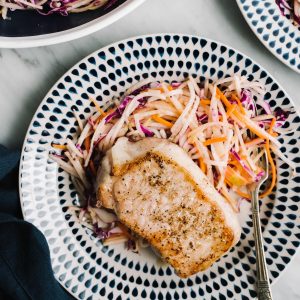 No ratings yet
Author: Danielle Esposti
Print Recipe Rate this Recipe Pin Recipe
Pork chops have an undeserved reputation for being dry, tough, and bland. But they needn’t be! Brining thick cut pork chops helps them retain moisture and seasons the meat from the inside out. The result is juicy, tender pork chops infused with earthy flavor. Serve them with a simple apple jicama slaw for an elegant, but easy, weeknight dinner.
Prep Time: 15 mins
Cook Time: 10 mins
Resting Time: 10 mins
Total Time: 25 mins
Servings : 4
Calories: 566

Disclaimer: This post contains affiliate links, which means we receive a small commission (at no cost to you!) if you make a purchase using these links. Rest assured, we only endorse products we own and truly love!