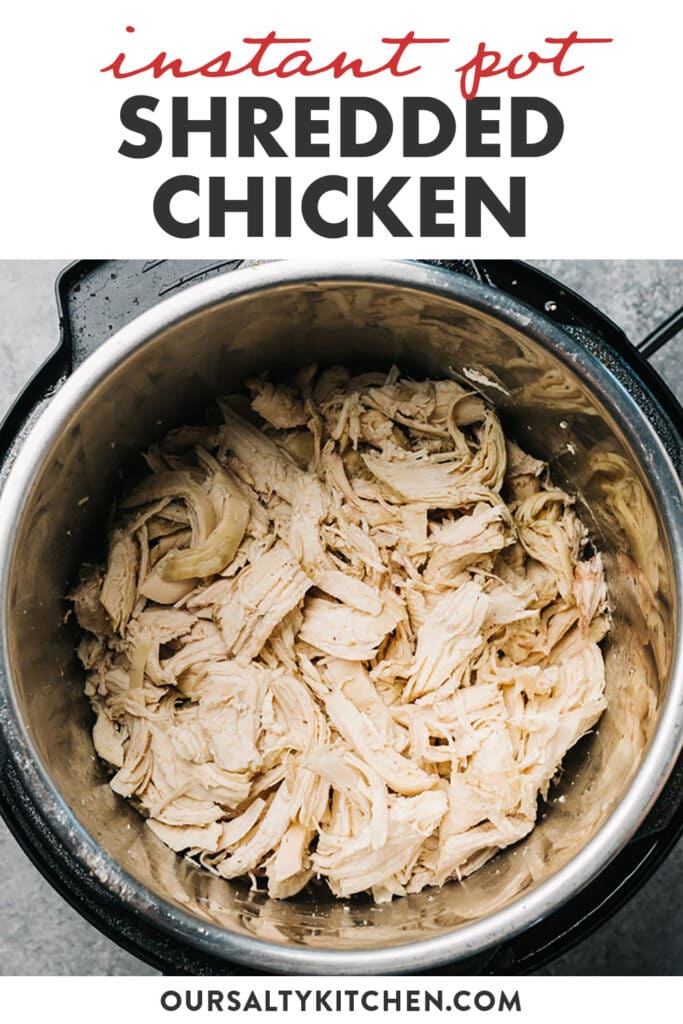 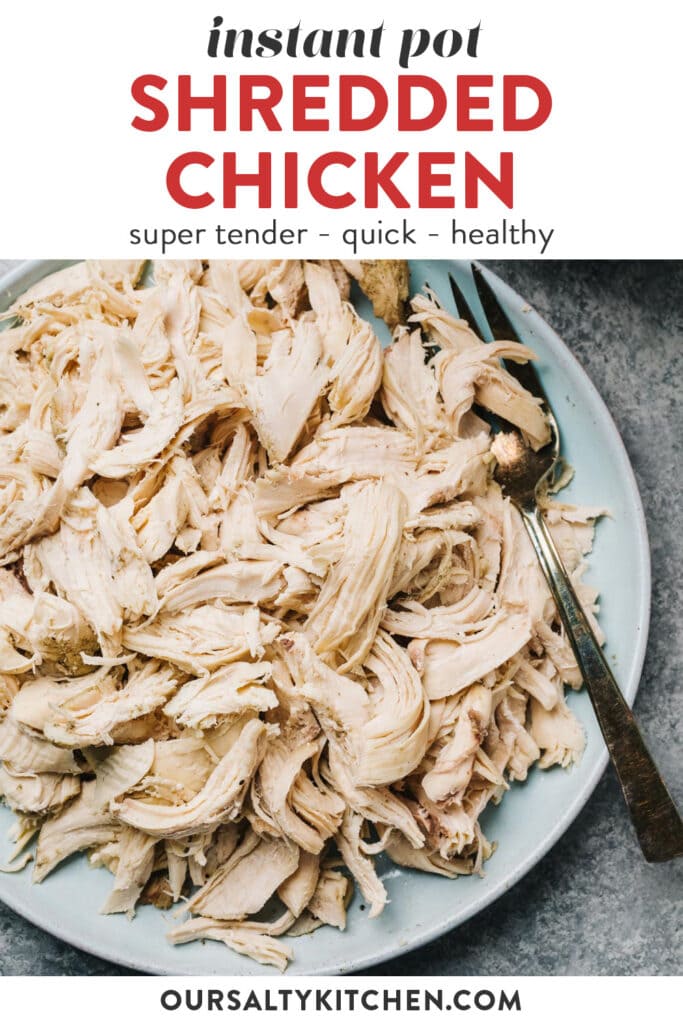 If you’ve got a recipe that calls for shredded chicken, then this tender, juicy, and flavorful Instant Pot Shredded Chicken is absolutely going to convert you. Lightly-seasoned, bone-in chicken breasts develop into a beautiful base for any meal in almost no time at all in your Instant Pot. It costs less than store-bought rotisserie chicken; it’s far faster and easier than other methods of cooking; and clean up is a snap! Why would you ever go back?

The history of food trends fascinates me. Even something as simple as a grocery store rotisserie chicken has a backstory. One I recently learned while pondering recipes. You see, I knew I needed shredded chicken for a recipe and reflexively made a mental note that “I can always grab a rotisserie chicken if I’m busy…” And I wondered why that was a default decision.

I know you want to know too. Let’s nerd.

Rotisserie chicken has it’s own Wikipedia page (of course) and it is a treasure trove of articles about how they came to be ubiquitous in places that traditionally only sold uncooked meat. In a nutshell, it was a response from grocery stores to combat the advent of fast casual dining (the cited culprit in every article: Boston Market) that started offering healthy takeout options for families in the 90s.

And if you actually read these articles, it is shocking to see (a) how big the market for rotisserie chickens is in the U.S. and (b) how much grocery stores have strategized to use them to grow their market shares.

Well, maybe not so shocking. Because American ingenuity is no joke…

Anyway, not only did people realize they could serve rotisseries chicken as-is, but then we started figuring out we could take those five dollar chickens (still $4.99 at Costco!) and efficiently turn them into soup, tacos, casseroles…you name it! I have half a dozen recipes on this site that mention using it as a base for such a recipe.

But here’s the thing – does a store-bought rotisserie chicken need to be the end-all be-all of ease and convenience?

Unless you’re some sort of poultry surgeon, the wings and legs are really only ever for eating (if you can even get anything off those wing flats). The thighs are usually soaked in grease (and god help you if you let that coagulate), though decent meat providers. The stars of the show are the breasts, but you’re still only getting two off a roaster, maybe yielding two cups of meat?

And then there’s the time it takes to clean a whole chicken, dispose of the grease, then deal with the chicken carcass and an absurdly inconvenient thunderdome of plastic. Big picture – it kind of feels not worth it unless you already have it on hand.

Fear not grocery stores, you’ll still get my money. I’m just spending it on bone-in chicken breasts from now on, thanks to another “food trend.” Friends, meet Instant Pot Shredded Chicken.

Why Use an Instant Pot for Shredded Chicken?

So many reasons, but first and foremost, it’s the quality of the Instant Pot Shredded Chicken itself. I wouldn’t recommend an Instant Pot if you weren’t going to get the absolute best result in terms of flavor, texture, and moisture if all it did was save you time and cleanup. But coincidentally, it does that too. Win-win-win.

Pro Tip:  if you’re one of those people who forgets to defrost your meat in a timely fashion (certainly not me, no, never…) you can still toss frozen breasts in your Instant Pot, add the seasonings to the broth, and with a slightly longer cook time you’ll get the same results.

How to Make Shredded Chicken in the Instant Pot

Apologies to Jacques Pepin, but we are not deboning these babies. Bone-in breasts (with a few perfect pinches of seasoning) are going to yield the moistest, most flavorful shredded chicken you’ve ever made or had. Instant Pot Shredded Chicken is so good, you might need to lock it up so you don’t eat it all before it makes it into your recipe. Simply season your breasts and pop them in the Instant Pot for 10 minutes with some broth. The meat practically begs to be shredded after that. It’s so easy you’re going to wonder why you ever shied away from doing it at home.

Remove and discard the skin, then shred the chicken from the bones using one of these three methods:

How to Store Shredded Chicken

To REFRIGERATE:  place in a sealed container, add a quarter cup of cooking liquid for every 4 cups of shredded chicken, and store in the fridge for up to 5 days.

To FREEZE:  place into gallon ziplock freeze bags, add cooking liquid, press all remaining air out of the bag, and store in the freezer for up to 2 months. Defrost overnight in the fridge.

How Much Shredded Chicken Does This Make?

The recipe as written will yield approximately 2 pounds of shredded chicken, or about 8 cups. That’s enough for one or two recipes, plus a freezer stash.

Can I Use the Leftover Cooking Liquid?

Heck yes! You’ll have about 2 cups of what ends up being very concentrated chicken stock. Add a splash or two to the chicken if refrigerating or freezing leftovers to keep the chicken super juicy. Use the rest in your next batch of chicken soup.

Did you make this Instant Pot Shredded Chicken? I’d love to know how it turned out! Leave a comment and a rating below. 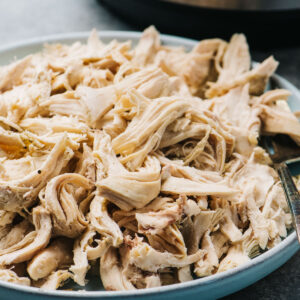 5 from 4 votes
Author: Danielle Esposti
Print Recipe Rate this Recipe Pin Recipe
Instant Pot Shredded Chicken is so good, you might need to lock it up so you don't eat it all before it makes it into your recipe. Bone-in chicken breasts are going to yield the moistest, most flavorful shredded chicken you've ever made or had. The seasoning is the perfect base for any recipe calling for shredded chicken, and the meat practically begs to be shredded. It's so easy you're going to wonder why you ever shied away from doing it at home.
Prep Time: 5 mins
Cook Time: 10 mins
Time to Pressure/De-Pressure: 30 mins
Total Time: 45 mins
Servings : 8 cups
Calories: 131

To Cook From Frozen: mix the seasonings into the broth, then pour into the pot. Position the chicken and cook at High pressure for 25 minutes; all the pressure to release naturally. Yield:  the recipe as written will yield approximately 2 pounds of shredded chicken, or about 8 cups. Shredded Chicken Storage How to Shred Chicken Chicken is best shredded when cool enough to handle but still warm. Remove and discard the skin, then shred the chicken from the bones using one of these three methods: