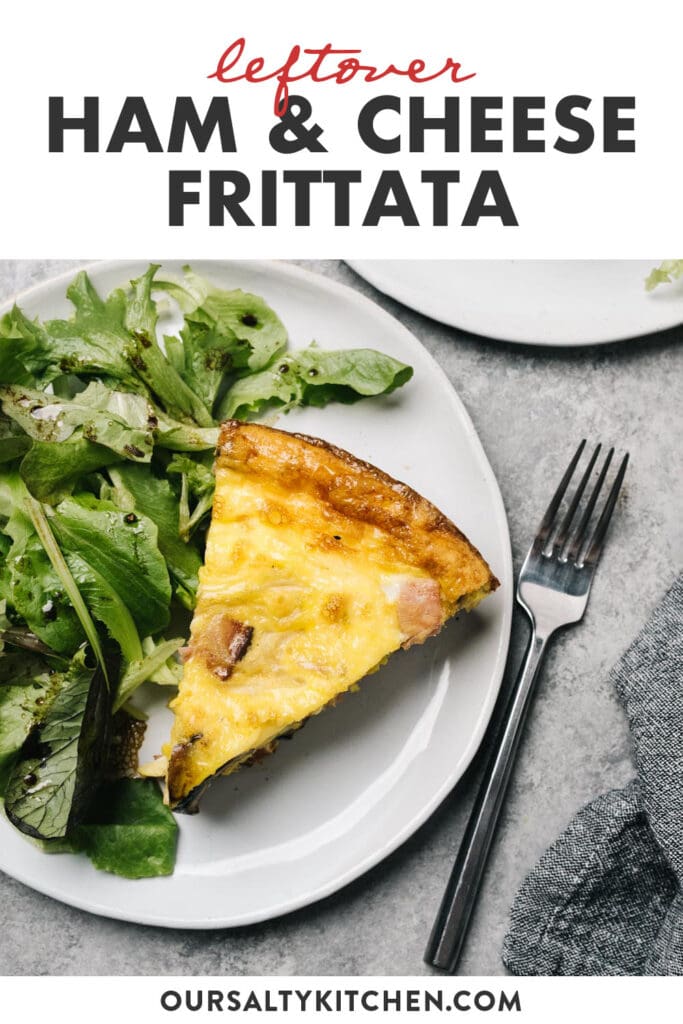 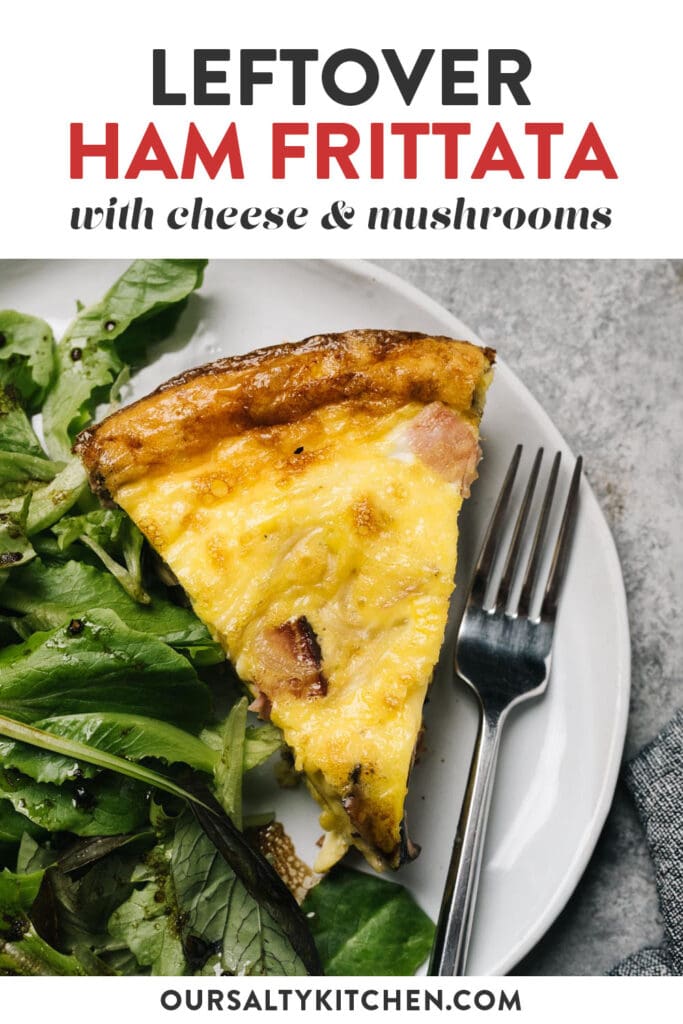 What’s light, fluffy, creamy, hearty, and uses up leftovers you aren’t quite sure what to do with? Leftover Ham Frittata combines eggs, cheese, ham, and mushrooms, all baked to perfection! This crustless quiche makes a crowd-pleasing post-holiday breakfast or brunch (or lunch or dinner or snack) when you’ve had one too many turkey sandwiches.

‘Tis the season to be prepared to use up an arsenal of leftovers. Because we all know, regardless of the size of our gatherings this year, there will be too much food. Probably more than usual for those of us hunkering down with small families. Thankfully, there are three tried-and-true “food groups” that can help you in your quest to see the back of your refrigerator again: soups, sandwiches, and eggs.

Soups are perfect for anyone doing heavy kitchen lifting during the holidays. You’ve got bones, you’ve got scraps, everything you need to get a really flavorful base going. If you’ve cooked enough, you could have homemade broth for the entire winter! That being said, that also takes a certain level of depression-era thriftiness I have only seen great-grandmas and great-aunts display.

Most of us go for the holiday sandwich. It’s the easiest way to sneak one (or two) more gut-fulls of all your favorite flavors without offending anyone’s sensibilities by turning down their cloying candied yams. I’ve been known to make a Thanksgiving sandwich at 2am after everyone has gone to sleep in order to get a jump on anyone who was surreptitiously thinking about eating the last of the stuffing before I’ve had my fill.

And while you might enjoy a ham sandwich, while I’ll tolerate it at the holidays, I’m not cramming it in between two leftover dinner rolls with stuffing, potatoes and cranberry relish. But ham and eggs? Now that’s a beautiful combo. And if you’re not a regular ham household, how often do you get “real” ham to toss into a frittata?? So bring on those leftovers for breakfast, brunch, or brinner!

What Kind of Ham Can I Use?

This classic crustless ham and cheese quiche is perfect for using up leftover ham. Any ham is fair game except thinly sliced deli meat. If you have a glazed or candied (i.e. “honey baked”) ham, I do recommend trying to cut some of that crust off so as not to drastically impact the overall flavor of the dish.

A frittata is a crustless quiche, typically made with eggs, vegetables, cheese, and sometimes, meat. It’s a great way to use up holiday leftovers like ham! Because there’s no crust to fuss with, a frittata makes for a quick meal for breakfast, brunch, lunch, or dinner.

How to Make a Ham Frittata

A frittata is made in one skillet that goes straight from the stove-top to the oven. Be sure to use an oven-safe skillet such as cast iron, or one that is completely stainless steel or aluminum (no rubber handles!). The skillet will be screaming hot when it comes out of the oven, so always use oven mitts when handling.

How do I Store Leftovers?

Cut into serving-size pieces first. Once your frittata has come down to room temperature, seal in an airtight container in the refrigerator for 3-4 days. I don’t recommend freezing because of the added dairy. Reheat leftovers in the oven by wrapping in foil and baking at 300°F for about 20 minutes, or until warmed through.

How do I Avoid a Rubbery Texture?

The biggest hurdles to frittata perfection are the mixing and the baking. To start, do not over-beat your eggs and dairy. As soon as those ingredients are incorporated, stop whisking. And second, do not over-bake. You’re not looking for a golden brown top all over. Your “crust” should look creamy with a puffy, jiggly center.

Make It Your Way

Did you make this Leftover Ham Frittata? I’d love to know how it turned out! Leave a comment and a rating below. 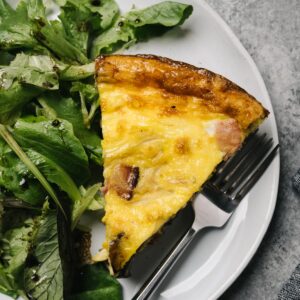 No ratings yet
Author: Danielle Esposti
Print Recipe Rate this Recipe
Use up your leftover holiday ham with this savory crustless quiche recipe. Leftover Ham Frittata is an impressive morning-after meal. Saute mushrooms and onions together in a cast iron skillet and toss in your leftover diced ham. Add whisked eggs, cream and cheese to the pan, and pop right in the oven for an easy bake.
Prep Time: 10 mins
Cook Time: 40 mins
Total Time: 50 mins
Calories: 459