×
You are here: Home » Meal Type » Condiments and Sauces » What is Coconut Aminos (and why we LOVE it!) 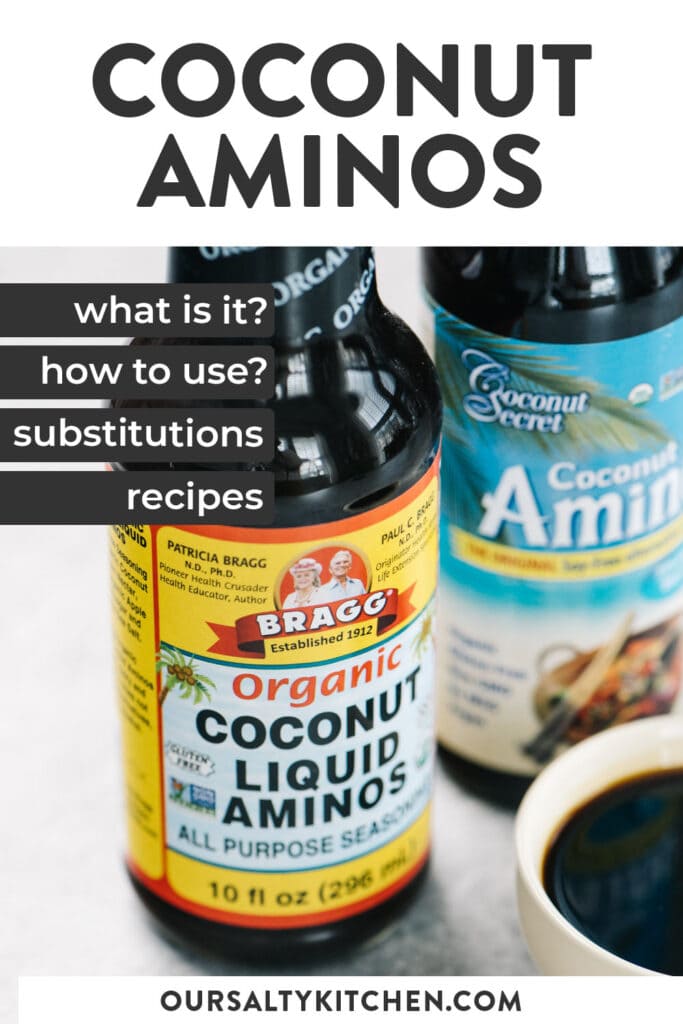 If you’re trying to reduce your soy intake or following a specific diet like paleo or Whole30, you’ve probably come across this condiment and wondered “What is coconut aminos?”. You’re not alone, and we’ve got answers! Learn everything you need to know about this fermented coconut sauce, as well as uses, favorite recipes, where to buy it, and storage.

What is Coconut Aminos?

If you are unfamiliar with this salty, tangy seasoning sauce, then welcome to a whole new world. Made from the fermented sap of coconut palm (with a bit of salt thrown in for good measure), coconut aminos can most closely be compared (in color, taste, and consistency) to soy sauce.

Before you even ask, no, it does not, in fact, taste like coconut. I wouldn’t even call it reminiscent of coconut like, say, coconut flour is. Its flavor clocks in somewhere between soy sauce and Worcestershire Sauce. Definitely milder and sweeter than soy (or it’s mostly gluten-free cousin, tamari), it has a vinegar-y tang that’s a bit closer to Worcestershire.

Depending on your preferences, it can certainly be called healthier. With nary a trace of soy, gluten (or any grains), or MSG, it’s perfect for people with certain dietary restrictions.

It clocks in with about half the sodium of soy sauce (per serving, and of course based on brand) but it’s definitely not LOW sodium. On the flip side, it’s also slightly higher in carbs. Always be sure to check your labels!

How to Use Coconut Aminos?

I’ve never been a fan of soy sauce. Despite the name of this blog, it’s simply too salty for my taste, leaving little room for seasoning to taste. We use coconut aminos almost exclusively as a substitute for soy sauce. (And occasionally for Worcestershire, but never in a Bloody Mary!)

You can find loads of unexpected places to use coconut aminos to add an umami punch to recipes. We add it to marinades like in our Balsamic Chicken Thighs or to season finished recipes, like our Steak Bites with Sweet Potatoes.

Soy sauce really needs no introduction. It literally is what it is:  a sauce made from fermented soybean paste. Whether frying rice or dipping sushi, this ubiquitous liquid is a staple in almost every Asian dish you can think of. But it’s got its downsides.

Soy sauce is extremely high in sodium and contains gluten, which is bad news for people with allergies. It also typically contains MSG.

Coconut aminos has none of those pesky issues, plus it’s an ideal substitute for those avoiding soy by choice for dietary reasons or by necessity for medical reasons. Substitute coconut aminos 1:1 for soy soy sauce in your favorite Asian recipes.

Coconut aminos can be substituted for soy sauce or Worcestershire sauce in equal measure. When seasoning to taste, be mindful of other salty seasonings in the dish.

As a Soy Sauce Substitute

As a Worcestershire Sauce Substitute

Using coconut aminos in place of soy sauce or tamari is largely based on personal preference. If you’re following a Whole30 protocol or paleo diet, it’s a terrific condiment to stock in your pantry with a variety of uses. Used sparingly, any impact on blood sugar – or overly salty food – should be minimal.

Coconut aminos does not need to be refrigerated but like many other fermented condiments, it’s ideal to store in a cool dark place. So yeah, I just keep mine in the refrigerator.

It’s not as hard as you think to find coconut aminos. Most grocery stores have it – check the natural foods section or on the shelf near other similar condiments. Even your big box super stores carry it these days.

If you shop through online whole food retailers (like Thrive Market), they’ll certainly have it, as does Amazon.

In any event, always check the label and look for a brand with no added sugar. We’ve had good results with Bragg and Coconut Secret.

Do you love coconut aminos as much as us? Leave a comment below telling us how you use it!

« How to Cut Cauliflower (Easy, No Mess!)
Paloma Cocktail »