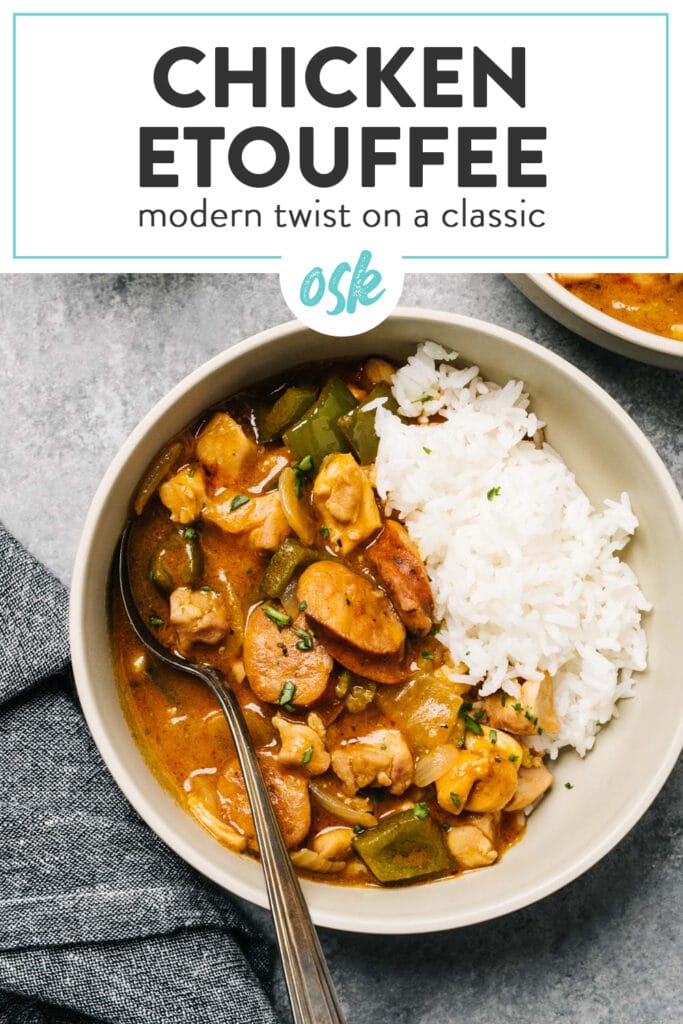 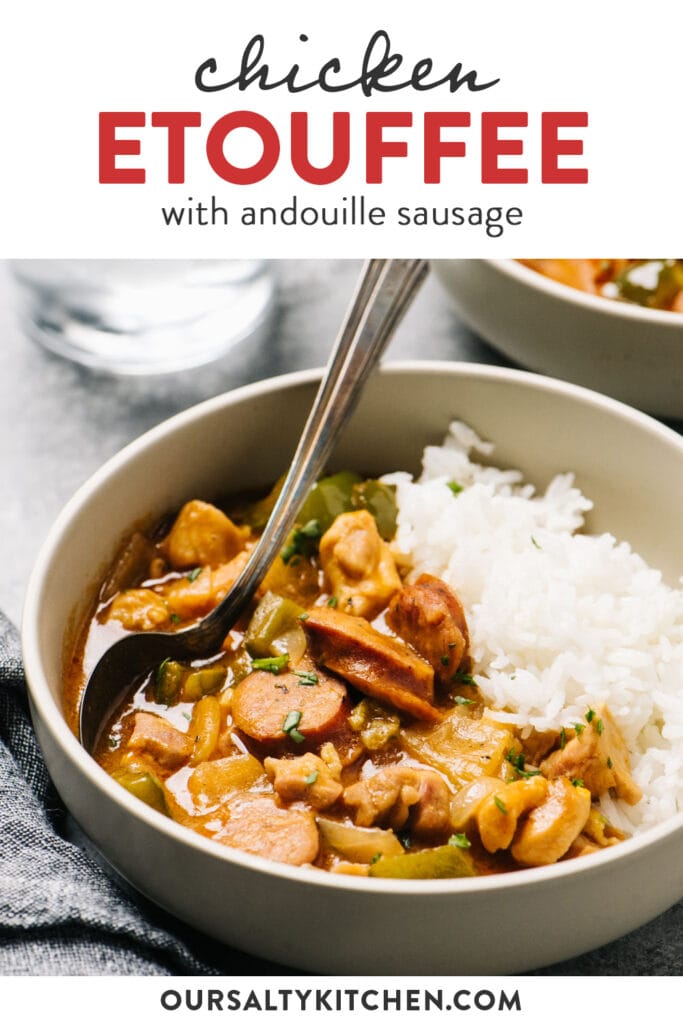 If you need a little less “cozy” and a lot more kick at your dinner table this fall, look no further than Chicken Étouffée. The most important ingredient in this twist on the cajun classic is ridiculously big, bold, zesty flavor – followed by tender chicken, spicy andouille, and fresh veggies – simmered together in perfect harmony. Bring big bowls and bigger appetites!

Laissez les bons temps rouler! There’s not enough time in the day or words in the English language to talk about the magical eats and drinks you can gorge yourself on in New Orleans. Though not unique to the city proper, chicken étouffée is just one of many dishes synonymous with the cajun (“country food”) and creole (“city food”) cuisine that permeates the Big Easy.

No matter what your favorite food is, or what your favorite restaurant is, it’s just a scientific fact that regional cuisine tastes better in that region. (Like, I’m not going to start an internet war over what the best BBQ is, but there’s a reason “Maryland BBQ” isn’t a thing.) Whether it’s something in the air, or the water, or that yard-of-frozen-daiquiri you’ve been sipping all over the French Quarter, New Orleans cuisine, when enjoyed in New Orleans, is simply one of life’s most worthwhile experiences.

But that does NOT mean you should not attempt to make and eat regional cuisines (including cajun/creole dishes) yourself. Goodness no! My friends, where would we be if food hadn’t migrated? I don’t even want to think about it. That’s a bleak world indeed. The trick is to make it, try it, learn it, and like it where you are so when you’re out in the big, beautiful, delicious world, you’re there to savor all it has to offer with gusto, and not out looking for the nearest recognizable chain.

Pronounced AY-too-FAY.  Now, I know what étouffée is. I’ve had it before. I’ve (clearly) made it before. But if you asked me to literally define it, I’d have to say I simply know it when I taste it.

Étouffée, Gumbo, and Jambalaya are often confused with each other. And it’s no wonder why. Each is a staple in cajun and creole cuisine; each features some combination of meat, seafood, and poultry; each is regularly associated with rice; each is seasoned within an inch of its life; each has nothing definitive in its name to indicate what the heck it actually is; and each will absolutely give you agita.

Now Danielle…if étouffée is traditionally make with shrimp, why the heck did you put chicken in it?

The very simple answer is…Cameron’s allergic to shrimp, and it ain’t pretty.

So when your husbands says (whines?) “I still want étouffée!”, then she-who-cooks-for-a-living finds a way to deliver. And while a chicken and andouille combo isn’t traditional, you can be your last jar of cajun seasoning that it’s still darn good. If you, too, suffer from a shellfish allergy or regularly cook for such a person, chicken étouffée is the solution.

How to Make Chicken Étouffée

Be sure to check the recipe card for detailed instructions and step-by-step photos.

The Holy Trinity (aka Cajun Mirepoix)

Onion, green pepper, and celery. Unlike traditional mirepoix which calls for 2 parts onion to 1 part each carrot and celery, the holy trinity are traditionally prepared in equal measure.

Cajun seasoning is a blend I have trouble finding in local grocery stores. It’s available from online markets like Penzeys Spices and specialty spice shops, but most of the time I simply make my own. Simply combine all spices in a lidded jar, shake until well-combined, and store the leftovers in your spice cabinet. Use the leftovers in our Cajun Chicken with Okra!

Did you make this Chicken Étouffée? I’d love to know how it turned out! Leave a comment and a rating below. 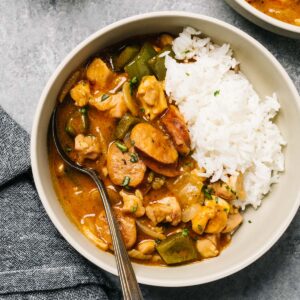