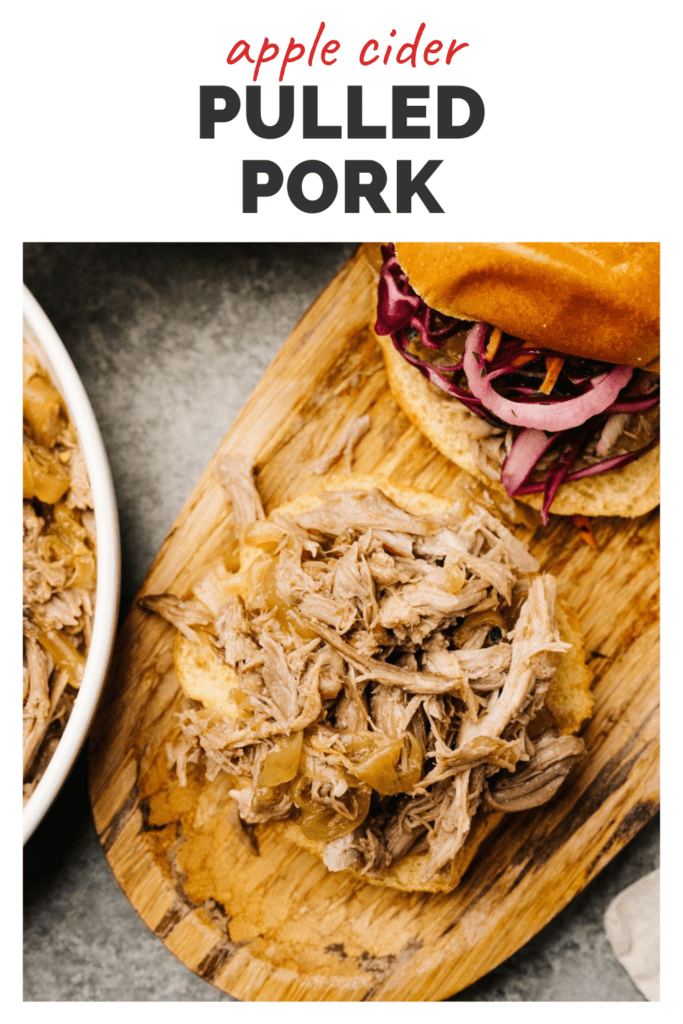 Pulled pork isn’t just for BBQ season. In fact, it also isn’t just for BBQ grills. Slow Cooker Apple Cider Pulled Pork is the perfect way to transition this dish from summer to fall. It’s sweet but not cloying, savory but still cidery. In just 20 minutes, it’s ready for your crock pot. Start it off low and slow in the morning for tender pulled pork at dinnertime.

While I’m sure some clown out there has developed a pumpkin spice pork butt recipe (or at least a seasoning rub), I shall not even be googling to check (one, because I am that confident it’s been done, and two, because I don’t need my search history muddied).

Instead we shall focus on the OG fall flavor – apple cider.

Big, big fans. Huge, even. Apple cider is a must on our fall bucket list, often in the form of beverages. It’s the perfect seasonal base for apple cider sangria or a sweeter take on a hot toddy. I’ve always got a big batch of mulled apple cider for Halloween night and other big gatherings.

This version of slow cooker pulled pork is so tender, juicy and oh-so flavorful. It’s got the perfect balance of sweetness and tang to it. Apple cider pulled pork should NOT be sugary though, so make sure you use cider without any added sweeteners.

Of course it makes for a bomb pulled pork sandwich – we love it with our apple cider vinegar slaw for a double dose, but it’s also lovely with creamy coleslaw. But it’s also a total winner in salads and bowls.

Final favorite thing about apple cider pulled pork? It’s a meal prep champion! Not only does it keep in the fridge for a week, but it freezes beautifully so don’t worry if you’re not feeding a whole dang picnic.

Apple Cider Pulled Pork is the hands-free, low-and-slow combo you need this and every fall. It takes just twenty minutes to prep, and your crock pot does all the heavy lifting. Thanks to a flavorful dry rub, apple cider, and apple cider vinegar, this slow cooker pulled pork recipe delivers deep, developed flavor every time. Slow cooker pulled pork should be cooked low and slow, so plan for at least 8 hours in the crockpot.

Why do You Put Apple Cider Vinegar in Pulled Pork?

Can Apple Juice be Used as a Substitute for Apple Cider?

What Cut of Meat Should I Use?

There are two preferred cuts for pulled pork: Boneless Pork Butt (aka Boston Butt) and Bone-In Pork Shoulder (aka Picnic Shoulder). Much to my sons’ dismay, you’re not actually eating a pig’s butt when you cook pork butt – it actually comes from the area behind the pig’s neck and head. However, the shoulder is just what it ought to be, and the cut is taken from the joint where the pig’s front legs meet its body.

Pork shoulder almost always comes bone-in (and with a mildly-disturbing layer of pig skin on it that will have to be removed). Pork butt, on the other hand, usually just has the fat cap still attached and beautiful marbling throughout. Each are great, cost-effective cuts given their size.

We prefer boneless pork when making pulled pork in the slow cooker, instant pot, and even in the oven. Boneless pork (typically Boston butt) is easier to handle and cooks more quickly than picnic shoulder. You can find Boston butt in most grocery stores, but ask at the butcher counter if you can’t find it. It generally comes pre-trussed in cooking twine.

Should the Pork be Covered in Liquid?

Nope! There’s a lot of fat and water in pork shoulder or boston butt. As the pork slowly cooks down, the fat will render and the water will release, creating a natural “sauce”. In my dutch oven pulled pork, I only use half a cup of water total. Here, we’re using liquid to flavor both the pork and the sauce, but a little (about 2 cups) goes a long way. The short answer? Pulled pork does not need to be fully submerged to properly cook in your slow cooker or oven.

Store leftovers in a sealed container in the fridge for up to 4 days; reheat in the microwave in 30 second increments, stirring in-between.

Freezer leftover apple cider pulled pork in a tightly sealed container (we like gallon ziplock bags) for up to 3 months. Defrost in the fridge overnight, then reheat in the microwave.

What to Serve With Pulled Pork?

Apple cider vinegar coleslaw is a classic, seasonal companion to apple cider pulled pork. It’s tart and crunchy, the perfect foil to slightly sweet, tender shreds of pork. We like it served on brioche buns.

Did you make this apple cider pulled pork? I’d love to know how it turned out! Leave a comment and a rating below. 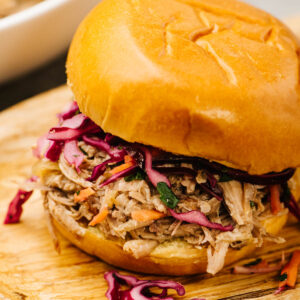