×
You are here: Home » Meal Type » Side Dishes » Crab Mac and Cheese 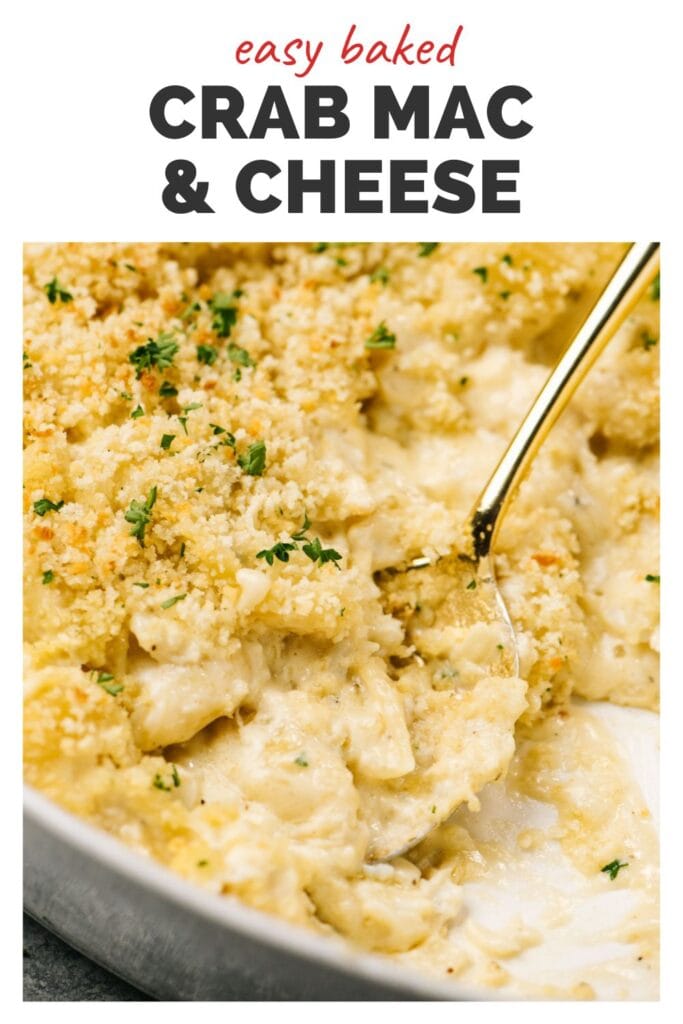 Between the jumbo lump crab and bubbly, creamy cheese sauce, it’s not easy to decide what your favorite part of Crab Mac and Cheese is, so good thing you don’t have to. This Christmas casserole is a fancy family favorite that’s loaded with enough crab meat, melty cheese, and tender pasta to make any holiday meal just a bit more special.

This one goes out to everyone who came from a family full of blended culture. Not so much those that celebrated in separate, distinct ways (not that there is anything wrong with that), but those who just took the best of both worlds, threw ’em in a pot, and let it all melt together to create new traditions. Crab Mac and Cheese is the ultimate celebration of my maternal and paternal Christmas traditions.

On my dad’s Italian-dominated side, we always had seafood for Christmas Eve. (Feast of the Seven Fishes, anyone?) Granted, that tradition in and of itself had morphed by the time it got to my generation, and for us kids, it was usually just some Captain Gordon Fish Sticks. But as we got older, shrimp cocktail, crab dip, seafood salad, crab cakes, and crab stuffed mushrooms were welcome additions to the table.

Now, my mom’s deeply Southern roots dictated that homemade macaroni and cheese was king at Christmas – and not something “fancy” like butternut squash mac and cheese, but classic oven baked mac and cheese with a pound of butter and four hand-shredded cheeses (as it should be).

So what’s a family to do? Well, when mom and dad got married, so did many of their traditions – and this baked crab mac and cheese is one of our favorite “babies.” I could go on about the parallels – that pasta is also an Italian thing; that crabs and Old Bay are a particularly Southern seafood combo – but the bottom line is, the marriage of crab meat and mac and cheese isn’t likely to fizzle anytime soon.

The best crab mac and cheese is made with jumbo lump crab meat, but if you can’t find jumbo, lump will do. What you cannot compromise on in this baked crab mac and cheese recipe is the actual cheese sauce – do not use pre-shredded cheese, do use more than one kind for the maximum allowable amount of melty goodness, and for the love of Christmas, whatever you do, don’t burn your roux!

How to Make Crab Mac and Cheese

Need the perfect savory side for Christmas dinner or brunch? Crab Mac and Cheese has you covered (and smothered and absolutely drenched) in a tangy, Old Bay-laced cheese sauce with lots o’ lumps – of jumbo crab meat, that is. This baked crab meat mac and cheese recipe is simple, but precise, so keep your eyes on the crabby prize!

What Kind of Crab Meat Should I Use?

Depending on where you live, it may not be crab season and there is no shame in choosing meat that’s been canned fresh during peak season. Do not fear canned crab meat from the seafood counter, but do avoid crab that’s not refrigerated or found in the tuna aisle.

We use large shells, and let me tell you ALL about why they’re the best macaroni for this recipe: they make for the perfect little “cup” to capture crab meat in every single bite.

If you’re not a fan of shells, elbow, rigatoni, and penne also work. But really – go for the shells! They’re pretty perfect.

Make it Your Way

More of Our Best Crab Recipes

Did you make this crab mac and cheese? I’d love to know how it turned out! Leave a comment and a rating below. 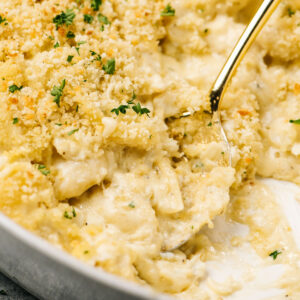 No ratings yet
Author: Danielle Esposti
Print Recipe Rate this Recipe Pin Recipe
Need the perfect savory side for Christmas dinner or Christmas brunch? Crab Mac and Cheese has you covered (and smothered and absolutely drenched) in a tangy, Old Bay-laced cheese sauce with lots o' lumps – of jumbo crab meat, that is. This baked crab meat mac and cheese recipe is simple, but precise, so keep your eyes on the crabby prize!
Calories: