×
You are here: Home » How to Cook » How to Make Pulled Pork: A Beginner’s Guide

Pulled Pork isn’t just for barbecue season. You don’t have to be a pit master if you can be a “pot” master – be it Instant Pot, Crockpot, or Dutch Oven. All you need is one cut, three techniques, and five seasonings for endless meal possibilities.

If, like me, you spent your early cooking years daunted by those MASSIVE slabs of pork in the bottom case of the meat section and only opted for chops (or maybe a tenderloin if you were feeling fancy) then this is just the motivation you need to heave-ho that hog into your shopping cart.

Pulled. Pork. Is. For. Everyone. Don’t let old episodes of “BBQ Pit Wars” make you feel less than. You do not need to live in one of the Carolinas or own a literal mop for the sauce. You do not need to sweat over a grill. All you need is one of three pots, super basic seaonings, and two forks. Where there’s a will, there’s a pulled pork sandwich. How’s THAT for an inspirational kitchen quote?

What is Pulled Pork?

Whether you call it pulled or shredded, it’s exactly what it sounds like – a sizeable cut of pork (primarily the butt or shoulder) gets slow-cooked to the point where it easily falls (or is “pulled”) apart into juicy, meaty strands, gets doused with sauce, and then is traditionally eaten as a sandwich. It can also be made into tacos, nachos, bowls, soups, salads, sundaes (I presume)… you name it!

While most people equate pulled pork with traditional, slow-smoked Southern barbecue, those of us with shorter grill seasons – or whose HOA’s would never allow an offset smoker (much less a drum smoker) in the neighborhood, and even may get cranky about charcoal grills – have had to find workarounds. Lucky for you, I love pulled pork enough to have perfected several methods.

This tried and true blend is extremely flavorful and versatile. You can use it on any number of dishes, but it especially shines on pulled pork.

Meet the gold standard of “indoor barbecue.” Slow-braised oven pulled pork is practically perfect in every way. If you’ve got the time and tools, this should be your go-to. First, that initial sear infuses the pork with so much additional flavor. But on top of that, the fat renders so beautifully in the oven and then mixes with the dry rub and bastes this wee beastie in its own juice… oh, Mylanta, it really is the best “BBQ sauce” I’ve ever had.

Whether you need to go hands-free, want low-and-slow tenderness, or both, Slow Cooker Pulled Pork delivers deep, developed flavor every time. Start up your crockpot in the morning for perfect pulled pork sandwiches by dinnertime, or makes a freezer-friendly meal for later. This method works for both bone-in and boneless cuts, and if you want to use a leaner cut (like pork loin), this is the only method I suggest. Want a variation? Try my Crockpot Apple Cider Pulled Pork.

Want that deep, slow-braised flavor fast? Pulled pork has never been quicker (90-minutes, baby!) thanks to the magic of Instant Pot. Add a sear beforehand and a quick roast after, and you’ve got a crispy pulled pork that will rival even the best oven-braised recipes. If it’s Taco Tuesday, switch it up with my Instant Pot Carnitas instead!

There are two preferred cuts for pulled pork: Boneless Pork Butt (aka Boston Butt) and Bone-In Pork Shoulder (aka Picnic Shoulder). No, a pork butt is not a “butt;” but yes, the shoulder is literally the shoulder. (The butt actually comes from the area behind the pig’s neck and head; the shoulder is located at the joint where the pig’s front legs meet its body.)

The shoulder is almost always going to come bone-in (and with a layer of pig skin on it that will have to be removed), whereas the butt usually just has its fat cap still attached, with beautiful marbling throughout. Bottom line – both are great, cost-effective cuts and work almost identically, but the edge usually goes to the butt for coming to you cleaner and having slightly more fat to keep the meat moist.

The cut of pork will dictate how you cook it. Our Oven Roasted and Instant Pot methods will only work with a boneless cut, but the Slow Cooker method works with both.

In a pinch (or if you’re trying to watch your fat intake) you CAN substitute pork loin (center-cut, never tenderloin) but be prepared – the results are going to be different because there’s less fat, muscle, and connective tissue. In other words, drier, less flavor, and lower shredability. If using this cut, choose the Slow Cooker method and try to periodically baste the meat.

When cooked properly (as per one of the three methods above), pulled pork will practically fall apart at the slightest prodding. But that’s not to say you don’t need to give it some elbow grease.

How Much Pulled Pork Per Person?

A standard serving size should vary anywhere from 3-4 ounces, and a 4 lb. cut will yield 8-12 servings of cooked meat. Just bear in mind that you’ll want to portion based on what you’re preparing – a small street taco with additional fillings requires less meat than a pulled pork sandwich.

Since almost any cut you use will yield A LOT of meat, and pulled pork freezes absolutely beautifully, do not feel bad about portioning it into Ziploc bags and freezing for future use. Squeeze as much air out as you can and seal it air-tight to keep for 2-3 months.

If you’re going to work on leftovers right away, you’re good to store in an airtight container for 2-3 days.

While you can absolutely use your leftovers for their original, intended purpose (pulled pork sammies with slaw, anyone?), feel free to get creative! Scroll for ideas.

Did you make Pulled Pork with one of these methods? I’d love to know how it turned out! Leave a comment and a rating below. 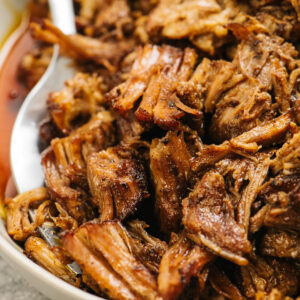 No ratings yet
Author: Danielle Esposti
Print Recipe Rate this Recipe Pin Recipe
You don't have to be a pit master if you can be a "pot" master – be it Instant Pot, Crockpot, or Dutch oven, master one of these methods and learn how to make pulled pork like a pro. All you need is one cut and five seasonings for endless meal possibilities.
Prep Time: 20 mins
Cook Time: 4 hrs
Total Time: 4 hrs 20 mins
Servings : 8
Calories: 269