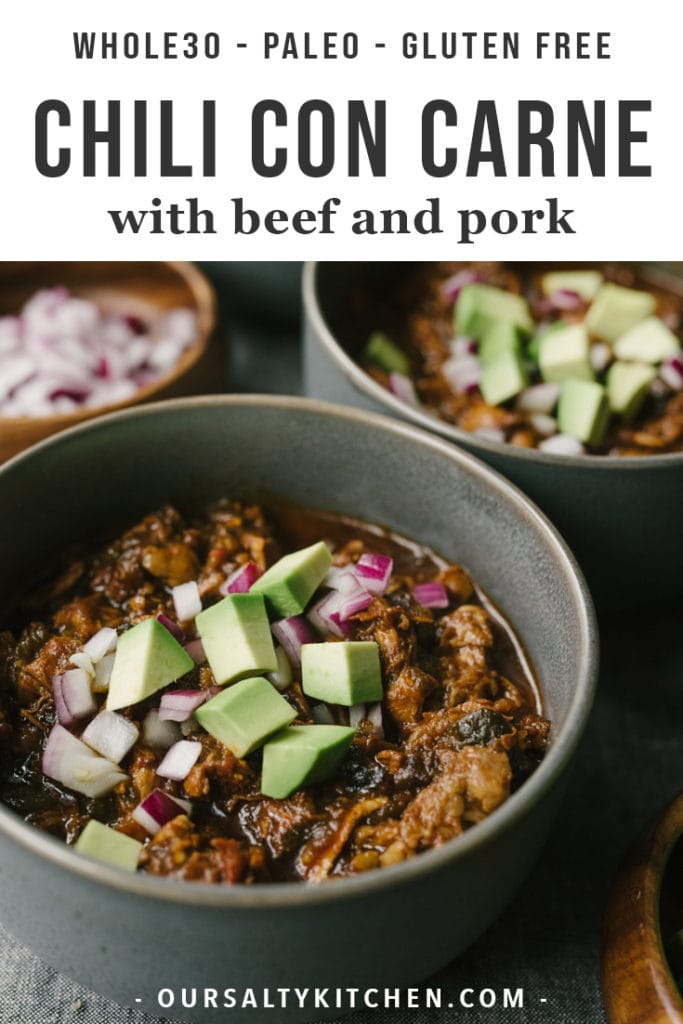 This recipe for Paleo Chili Con Carne is a rich and bone-warming addition to your cold weather rotation. This version is made with beef and pork, and slowly simmered with roasted poblanos, jalapeños, tomatoes and an adjustable-heat spice blend until the meat is fall-apart tender. It’s a paleo and whole 30 crowd-pleaser!

This post was originally published last fall. I made some adjustments recently to create a strictly Whole30 and paleo chili con carne, so it’s time to share an update!

The first time I shared this recipe, Cameron’s mother and her husband were in town for a visit and I needed to serve something that would satisfy our Whole 30 dietary restrictions at the time, but that was also an easy and delicious crowd pleaser. Enter this paleo chili con carne.

For you purists out there, fair warning that I’ve added tomatoes to this recipe despite their absence in authentic Texas chili con carne, but hey – this is my blog and if I want tomatoes, I’m gonna add tomatoes (but also because tomatoes gave me wicked heartburn my entire pregnancy, and now that the little bugger has arrived I’m adding them to anything and everything).

My chili con carne is heavy on the meat and a bit lighter on the spice, but will still satisfy the heat-lovers in your life. I can’t speak to it’s palatability for children, as Cassian simply said “nope” and left his bowl untouched. Oh, 6-year olds.

Pin it now! Click here to pin this paleo chili con carne to your recipes board on Pinterest!

This recipe starts with fresh poblano and jalapeño peppers. YAZ. I know, they’re not exactly seasonal. But chili is, and chili just ain’t chili without fresh peppers. So I bent the rules and got some not-exactly-seasonal-but-so-very-necessary fresh poblanos and jalapeños. Rules are meant to be broken, right? Right.

Many recipes for paleo chili con carne omit fresh peppers, and I’m sure you could do so here here by swapping them out for extra chili powder (an additional couple of teaspoons should get the job done). Personally I think the additional 20 minutes or so of prep time to roast fresh peppers pays off in a richer, more complex flavor.

Roasting fresh peppers is super duper easy. You simply rub them with olive oil, plop ’em on a baking sheet, and pop ’em into the oven until they’re nice and charred (make sure you flip them over halfway through so they can char on each side).

Once they’re finished roasting, transfer to a bowl while they’re still hot (use tongs!), cover, and cool at room temperature. This will effectively “steam” the peppers, which will allow you to peel the skin and remove the seeds quite easily.

Tip – peeling the peppers under cool running water makes the job even easier and faster. Keep more or less of the seeds depending on how much heat you want in your finished chili.

I prepare the rest of this recipe in my 6-quart enameled Lodge cast iron dutch oven. If you don’t have a dutch oven and don’t think you need one, (1) you’re wrong; and (2) this guy is a really great starter version if you’re not ready to spent hundreds for a pricier brand. A soup pot just isn’t the same.

I’ve had my Lodge going on 5 years now and it’s yet to fail me. In fact I love this thing so much that I have it in three colors (blue, red, and white – how very patriotic, eh?).

We’ve got both beef chuck roast and pork shoulder to get this party started, and our friend bacon will be joining us in just a moment.

Start by cutting the meat into 1-1.5″ cubes, and then brown the cubes on all sides in a dutch oven. You’ll want to brown them in a single layer so as not to overcrowd the pan (which would result in steaming instead of searing) and then set them aside with a slotted spoon as they finish.

Good chili isn’t difficult, but it takes some tender love n’care to come out just right. AKA – don’t rush the browning process. It takes a good 20-25 minutes start to finish, but the final product is well worth your efforts.

After browning the meat, you’ll render some bacon. Use sugar-free bacon to keep it whole 30 and paleo. Next up, some onions, garlic, ancho chili powder, and cumin.

Finally, you’ll return the meat to the pot and add in the roasted peppers along with some crushed tomatoes and beef broth. A few hours of simmering later and….

See how the meat just completely falls apart? That texture is the bomb.

While this chili takes some time and therefore relegates this recipe to a strictly weekend meal, it’s definitely found a happy home in our cool weather rotation.

Did you make this Paleo Chili Con Carne? I’d love to know how it turned out! Leave a comment and a rating below. 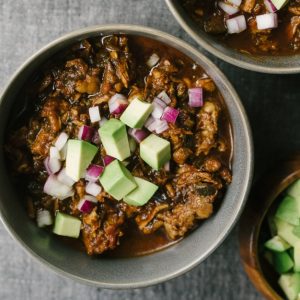