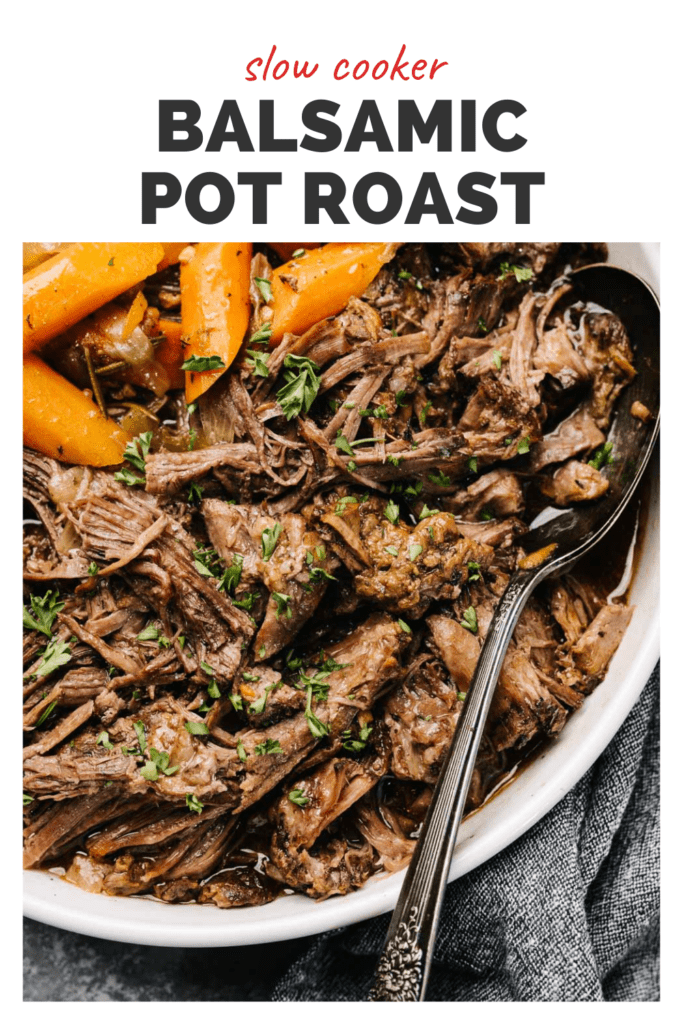 If you think of plants when you hear the word “succulent,” you’re not getting nearly enough braised beef in your diet. Slow Cooker Pot Roast is tender, juicy and yes, succulent. It’s a classic family favorite that pairs perfectly with potatoes and always leaves leftovers. And best of all, your Crockpot makes this easy pot roast recipe even easier.

Sometimes all you need is to feel seen. And other times, all you need is a foolproof, fail safe recipe. And sometimes those two things butt heads. But I promise, dear reader, I DO SEE YOU.

You see, I have a very popular recipe for red wine pot roast that y’all love. And I love it too. So much. Because this pot roast recipe has always been not only foolproof and fail safe, but it’s a cozy, comforting, absolutely delicious one-pot wonder. But as with any recipe, the stars have to align and conditions have to be right.

On occasion, I get perplexed responses from folks who’ve tried this beef pot roast in the oven but don’t feel it lived up to their expectations. The most common issue I hear is that “all the liquid evaporated” or “I had to cook it for an hour more than what was called for.”

Here’s the thing… it’s not you, but it may very well be your equipment.

If the braising liquid from your pot roast is evaporating, it probably means the seal between the pot and the lid on your Dutch oven isn’t as effective as it should be. If there are even microscopic cracks or chips along the rim, they won’t form a tight seal and moisture will escape.

And cook times, well they’re the bane of every creator’s existence. Ovens are like snowflakes and no two cook the same. Slow braising pot roast in the oven takes a LONG time (up to five hours) regardless, but everything from make and model to rack placement, elevation, and even cleanliness can impact cook times.

Thankfully, there’s a pot roast solution that doesn’t involve kicking your Dutch oven all the way to the curb.

The Slow Cooker Wins for a Succulent Roast

Cooking pot roast in a slow cooker can resolve both these issues – and more – while delivering the same big, bold flavor and absolutely succulent and tender shreds of beef we all know and love in a good pot roast recipe.

Slow cooker pot roast does not need to be babysat in the same way oven roast does. You’ll know immediately if your crockpot is leaking anything out. And slow cookers are designed to slow cook – time and temp are more likely to remain consistent and testing for doneness is certainly easier.

If you’re dedicated to perfecting a beloved dish according to your environment, there’s no greater reward. But in an absence of patience, time, or equipment, slow cooker pot roast will nestle its way right into your heart and taste buds.

Yes, You Need to Sear The Roast First!

I know – roasts are heavy and unwieldy. Before I invested in good quality tongs – and learned how to truss – I literally broke a cheap pair trying to navigate a pot roast into a skillet for browning. But the key lesson is that it didn’t stop me from browning the roast first.

Searing is a small step that adds big flavor to both the gravy/sauce and the meat itself. Leave your trussed roast alone to sear around 5-7 minutes on at least two sides, until the outside is golden, caramelized, and crispy. This is called the Maillard reaction and it creates tons and tons of flavor.

While you’re at it, give the garlic a short saute session to take the bite out of it, then deglaze the pan in order to absorb and transfer all those flavorful browned bits to the crockpot – they’ll infuse the braising liquid with savory, caramelly goodness.

How to Make Pot Roast in the Slow Cooker

Ditch the Dutch oven. Slow Cooker Pot roast starts with a stovetop sear, and finishes with the rich, fall-apart shreds of tender chuck roast you crave. Worcestershire, garlic, and balsamic punch up the flavor during the braise. This easy pot roast recipe is hands-free and foolproof – just don’t forget the mashed potatoes!

Pot roast is one dish that definitely benefits from some “tough love.” Slow cooker pot roast can be made with any well-marbled cut of beef – a cut that has visible lines of fat throughout – but tougher roasts (from the more “active” parts of the animal) actually hold up better to braising and are more likely to result in those fall-apart, melt-in-your-mouth chunks.

Chuck roast is common and our favorite cut for slow cooker pot roast – it’s relatively economical for the size of the roast and packed with lots of fat and connective tissues that will render and flavor the gravy.

Other large roasts work well too – consider brisket, rump roast, or bottom round.

Can I Add Potatoes?

I typically do not add potatoes to my slow cooker pot roast for two reasons: (1) mashed potatoes are boss and (2) potatoes tend to get unappealingly soft and a bit mealy while braising in the slow cooker.

That being said, you CAN add potatoes, with caveats:

Can I Make this in the Instant Pot?

Yes! But with modifications – enough that I made a whole post about it! Click here to learn to cook Instant Pot Pot Roast.

Did you make this slow cooker pot roast? I’d love to know how it turned out! Leave a comment and a rating below. 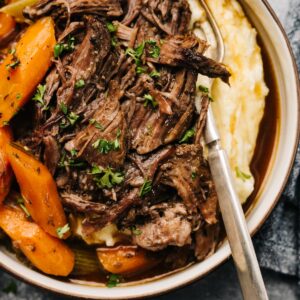 Serving Size:  6 oz shredded pot roast and 1 cup cooked carrots and celery Storing:  leftovers will keep in a sealed container in the fridge for up to 4 days; store gravy and shredded beef in separate containers. How to Skim Fat:  lay a paper towel over the liquid until it just touches the surface. The paper towel will absorb the layer of fat on top of the jus. Discard the paper towel once it’s saturated and repeat as needed until the fat is skimmed.