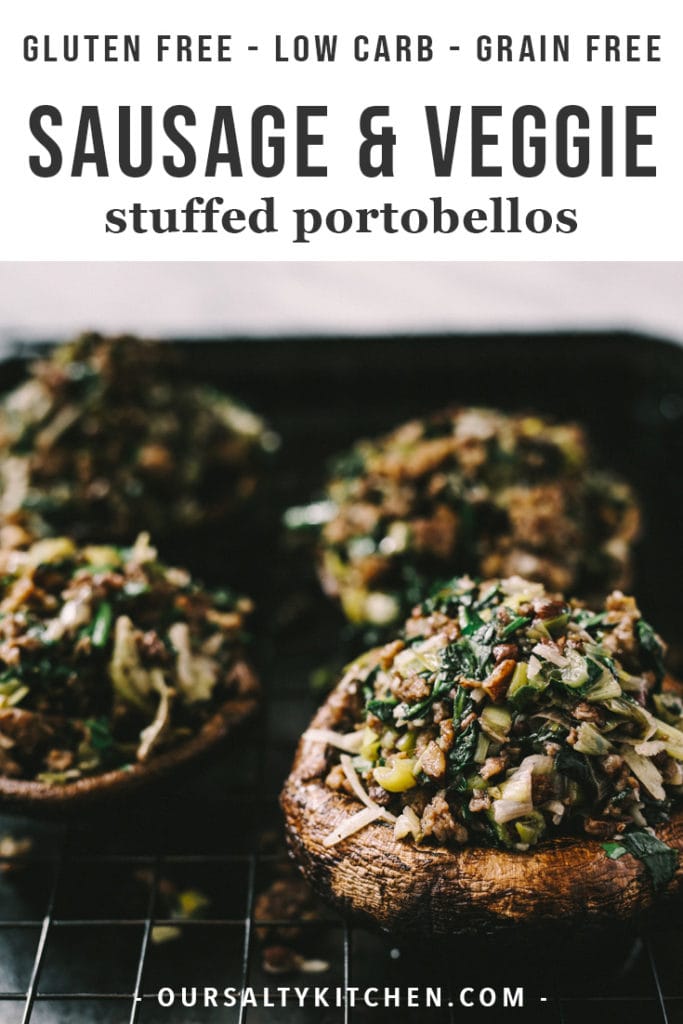 Healthy, low carb Stuffed Portobello Mushrooms! Your clean eating menu is about to get even more delicious with this healthy twist on classic stuffed mushrooms. These portobello mushrooms are stuffed with vegetables and just enough sweet Italian sausage to make them decadent.

As a child, there was no savory appetizer I anticipated more than stuffed mushrooms. They only came around at special occasions, served in miniature form, stuffed with Italian sausage, spinach, breadcrumbs, and ricotta cheese and slathered with melted mozzarella. Greedy little brats we were, my brother and I would load up a plate with at least a dozen, then run to the basement or garage to stuff them into our faces before we could be scolded for our gluttony. To be honest, I don’t think our mother really cared all that much – there were worse things we could have gorged on. Had you separated most of those ingredients we were unlikely to touch them, even when prodded with the heftiest of bribes – especially the mushrooms. But baked together until gooey and golden brown we gobbled them up like nobody’s business.

This recipe for Sausage and Vegetable Stuffed Mushrooms is a grain-free, veggie-packed, entree-sized version of the Italian cocktail party classic. They’re part childhood homage, part desperation to use up the half-pound of sausage in the fridge before it went bad. They’re also easy and filling, and come together in less than 45 minutes. Dinner is served y’all.

Sweet or Hot Italian Sausage is acceptable here. If you’re feeling feisty, try kale instead of spinach, or sweet onions instead of leeks. It’s all good. I really don’t recommend skipping the cheese. Without a binder like cheese or breadcrumbs, the stuffing’s gonna fall apart. Also, cheese is delicious and you should consume it at every opportunity.

These scale down to an appetizer pretty seamlessly. To do so, start by substituting 12-18 (depending on size) crimini mushrooms for the portobellos. Instead of pre-roasting, simply prepare the stuffing, stuff the mushrooms, top ’em with cheese, and roast them at 400 until the mushrooms are soft and the cheese is bubbling (about 10-12 minutes).

Did you make these Stuffed Mushrooms? I’d love to know how they turned out! Leave a comment and a rating below. 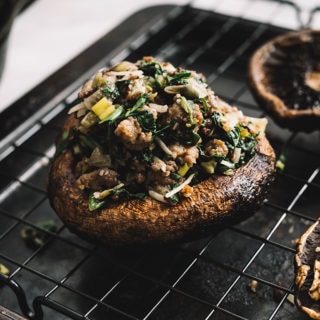