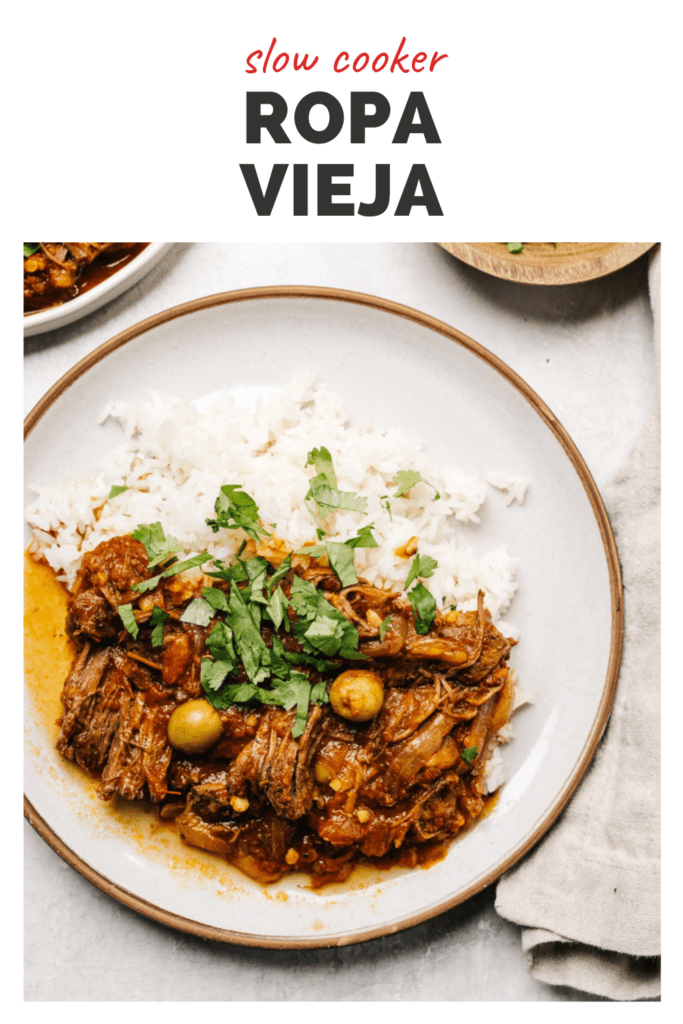 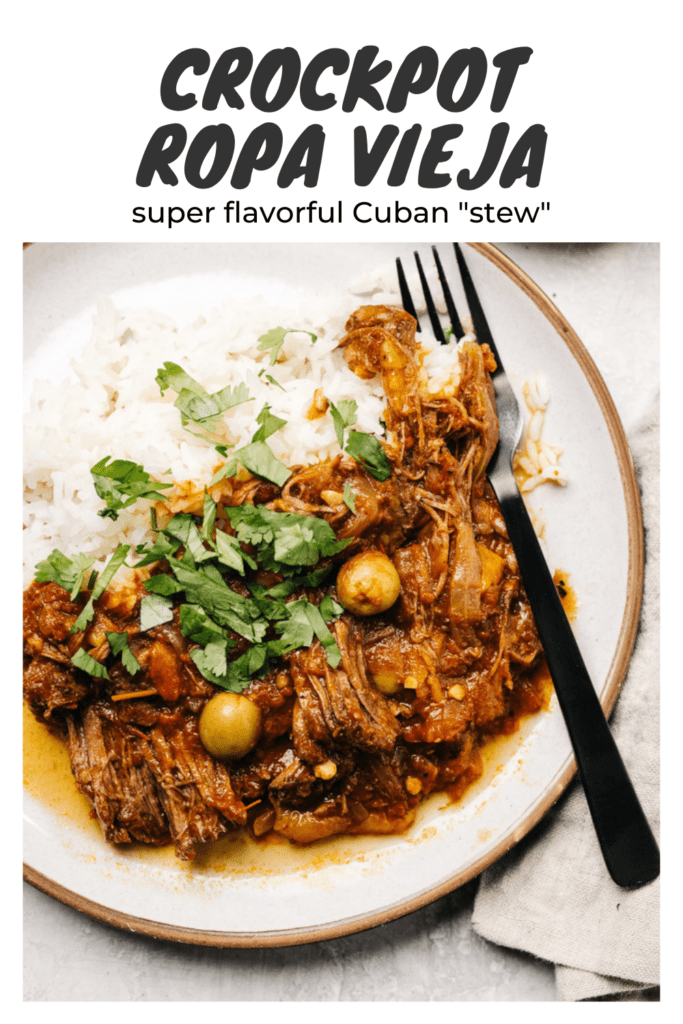 Can beef stew get better? It can when you add a little Caribbean twist! Our Slow Cooker Ropa Vieja recipe captures the classic flavor of this Cuban favorite but eases up on your budget and schedule. Tender fall-apart beef mingles with peppers and onions in a fragrant slow-simmered crockpot sauce for an easy dinner that wakes up your senses while keeping it cozy.

I’m always a bit divided come February. While the chill has now fully settled into my home and my bones, I know this means we don’t have a lot of time left in stew season. So let’s make the most of it by adding something new to our stew stash!

What is Ropa Vieja?

Literal translation from Spanish? “Old Clothes.” I hesitated to type that here for fear that it would evoke something that is not, in fact, tasty as hell, but the internet seems to concur – the final dish resembles a heap of colorful, shredded rags and earned its name fair and square.

Like many classic Spanish favorites, ropa vieja actually originated from Sephardic Jews who settled on the Iberian Peninsula. It began as a slow cooked stew of chickpeas, but by the time it made it to Cuba in the 19th Century (via the Canary Islands), many had adopted it as a staple and started incorporating meat into the dish.

It’s hard to say where in South America, Central America, and the Caribbean the dish made its way to first, but there are versions all over the western hemisphere that incorporate local meats, beans, grains, and vegetables.

Cuban ropa vieja is a beloved national dish, and the version I’ve seen served – and eaten – most in the U.S. closely resembles the Cuban version, so let’s pay some homage!

*record scratch* Well, let’s make it a little more user friendly first. Because, there’s a lot of process involved in stew-type meals (there is no bigger misnomer than “simple” peasant food…).

Old school ropa vieja was prepared specifically as a sloooooow cooking stew so that adherents avoided actually cooking on the Sabbath (as per scripture). Ingenious!

So, we’re following in the footsteps of the vanguard over at Serious Eats by eliminating some of the multi-step process of the OG version – i.e. water-braising the beef, cooking a separate sofrito – and straight up adapting the “slow cook” in “slow cooker ropa vieja” to “crockpot ropa vieja,”. A few simple modifications make it beginner friendly and super flavorful, OSK-style.

How to Make Ropa Vieja in the Slow Cooker

Enjoy stew season while you can with an easy crockpot dinner version of this Cuban classic. Slow Cooker Ropa Vieja is loaded with tender, shredded beef in a savory simmer sauce that works on its own, over traditional rice, or even over a mash (just like other beefy stews). Use chuck roast for maximum flavor on a minimal budget.

What Cut of Meat Should I Use?

This is where this recipe goes off the beaten path. Flank steak is traditional in ropa vieja for its shape – the long grain in the meat yields long strands of shredded beef. But it’s also pricey, and its lower fat content isn’t an ideal choice for slow cooker meals with little added cooking fats.

We like chuck roast for this easier slower cooker version. It’s a more economical choice, with lots of fat/marbling for flavor. And it can stand the time it takes to cook low and slow in a crockpot.

To Refrigerate:  Store leftovers in a tightly sealed container in the fridge for up to 4 days. Reheat in the microwave in 30-second intervals, stirring in-between, or in a pot over medium heat until warmed through.

To Freeze:  Fully prepared, ropa vieja will freeze just “fine*.” Cool the stew, then portion into airtight containers and store in the freezer for up to 3 months. Defrost in the fridge overnight then reheat in a pot over medium heat until warmed through.

(*When I say “fine,” I mean that some purists don’t love cooked-then-frozen-then-defrosted-then-reheated vegetables, but the taste and texture aren’t compromised in any significant way. That’s a personal choice you can make.)

Did you try Ropa Vieja in the slow cooker? I’d love to know how it turned out! Leave a comment and a rating below. 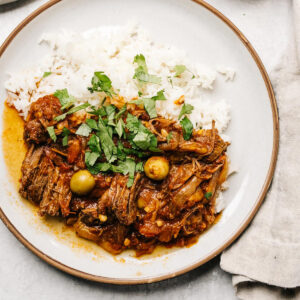 5 from 2 votes
Author: Danielle Esposti
Print Recipe Rate this Recipe Pin Recipe
Enjoy stew season while you can with an easy crockpot dinner version of this Cuban classic. Slow Cooker Ropa Vieja is loaded with tender, shredded beef in a savory simmer sauce that works on its own, over traditional rice, or even over a mash (just like other beefy stews). Use chuck roast for maximum flavor on a minimal budget.
Prep Time: 15 mins
Cook Time: 8 hrs 15 mins
Total Time: 8 hrs 30 mins
Servings : 6
Calories: 412