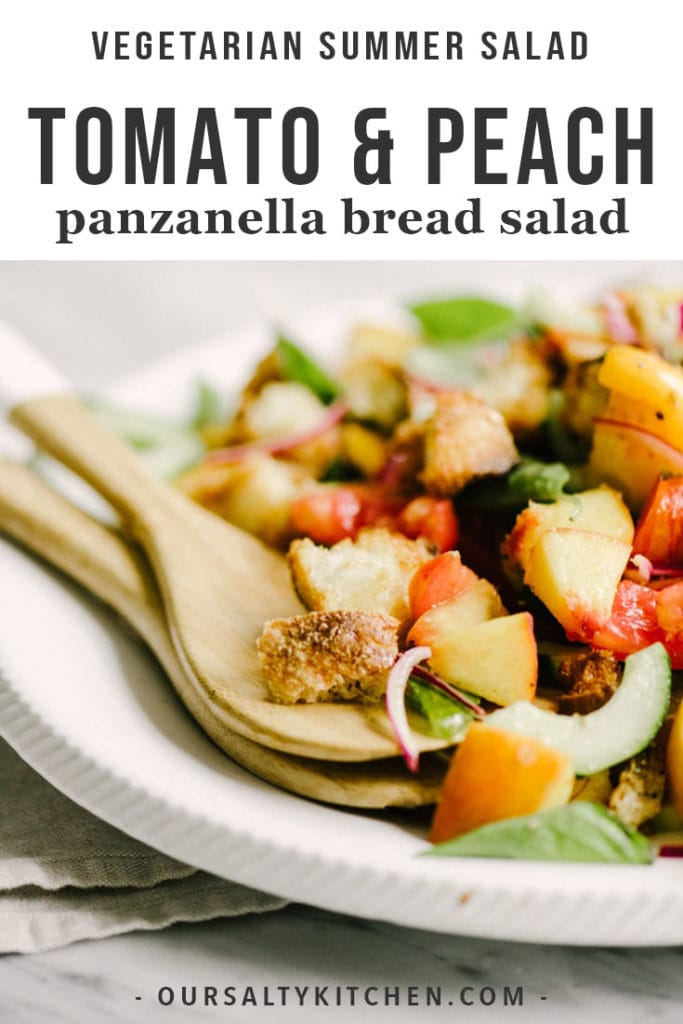 Peach Panzanella is the quintessential late summer salad. Juicy peaches and tomatoes, yeasty sourdough, scads of fresh basil, and a subtle champagne vinaigrette make the best of summer produce shine. This is an easy recipe for a packed lunch or light dinner. It also travels well for perfect picnic fare.

Yesterday I drove Cassian halfway to NJ to meet my parents so that he could enjoy a few more days of Grandma Camp before school starts next week. We hit a ton of traffic on the interstate and I quickly realized that we were smack in the middle of college move-in traffic. I waxed a bit nostalgic as I remembered my mom, dad, brothers, and grandparents packing into my grandfather’s gigantic van to drop me off for freshman orientation. And then I was hit with a sobering thought – it’s been 18 years since that day. Literally half a lifetime ago. I texted this thought to a couple of my college besties and was met with the classic responses of “well, that’s horrifying” and “let’s go back RIGHT NOW”. Methinks we’ll be cooking up a reunion sooner than later.

In the meantime, I’ll be waxing a different kind of nostalgia with this peach panzanella salad as I mourn the close of summer. We’ve still got a few weeks (maybe a month?) of dwindling summer weather in Maryland, but the cooler nights this past week are a sure sign that autumn is nearer than far. I’ve been busy shoving peaches, tomatoes, corn, and melon into my greedy piehole as fast as I can buy them, and there’s no better way to enjoy a bounty of late summer produce than with this peach panzanella. It’s one of my favorite summer whole food recipes, packed with tons of flavor and gorgeous color.

Panzanella is traditionally made with day-old bread, tomatoes, vinegar and olive oil. It’s a fantastic whole food, no waste recipe because you can use up stale bread and those not-so-perfect looking but perfectly-ripe-and-juicy tomatoes from the farmer’s market. I love adding ripe, juicy peaches for an extra hint of sweetness. Peaches and tomatoes are foodie BFFs and they only get better after marinating with tons of fresh basil and a little vinegar and olive oil.

You can use any ripe tomato of your hearts desire for this recipe – heirloom, cherry, grape, sunburst. Whatever strikes your fancy. I use a variety of colors and textures because it makes the whole salad look so darn pretty. Same goes with the peaches. Just make sure they’re ripe, because the juices from the tomatoes and peaches are what really make the marinade shine.

I use sourdough for panzanella, even though it’s not traditional. I love how it’s subtle yeastiness plays off the sweetness of the peaches and tomatoes. Even if it’s day-old, I give it a good 10 or so minutes to dry out in a 450* oven. The sourdough croutons suck up the juices from the tomatoes and peaches until they’re tender and chewy.

I finish the whole thing off with a few handfuls of fresh basil, and thinly sliced red onion and cucumber for crunch (because really, what’s a salad without a little bit of crunch?). The vinaigrette is subtle – olive oil and champagne vinegar – and adds just enough acidity to complement the tomatoes, instead of competing with them. The choice to add some fresh mozzarerella or burrata is entirely yours. While this is delicious vegan, I’ve never met a savory recipe that couldn’t benefit from a little cheese.

Did you make this Peach Panzanella Salad? I’d love to know how it turned out! Leave a comment and a rating below. 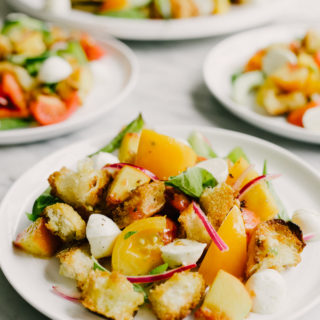