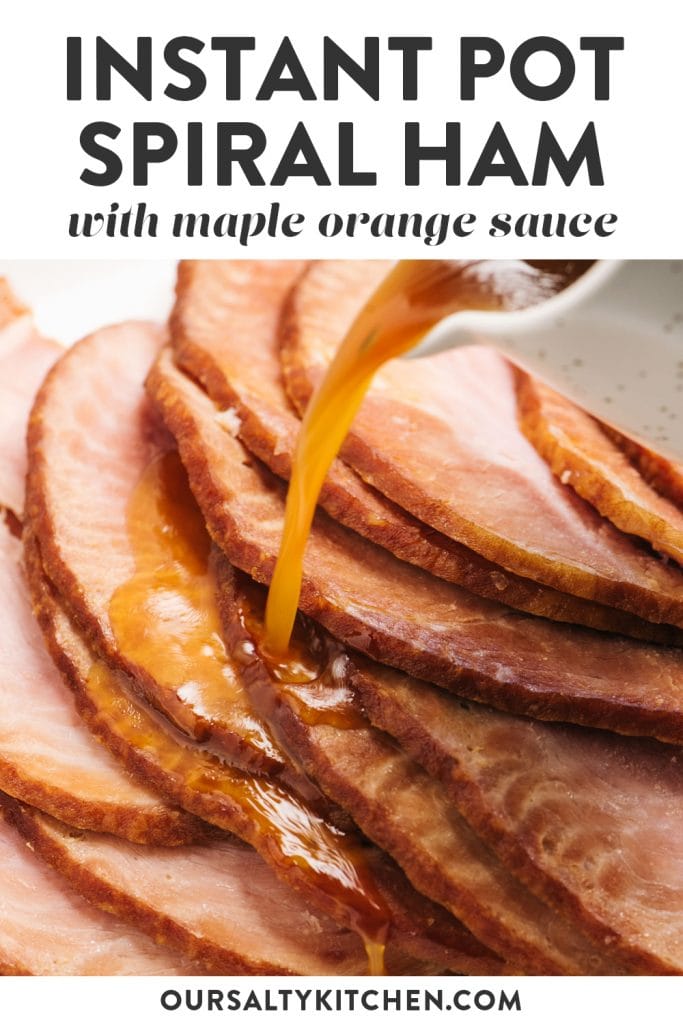 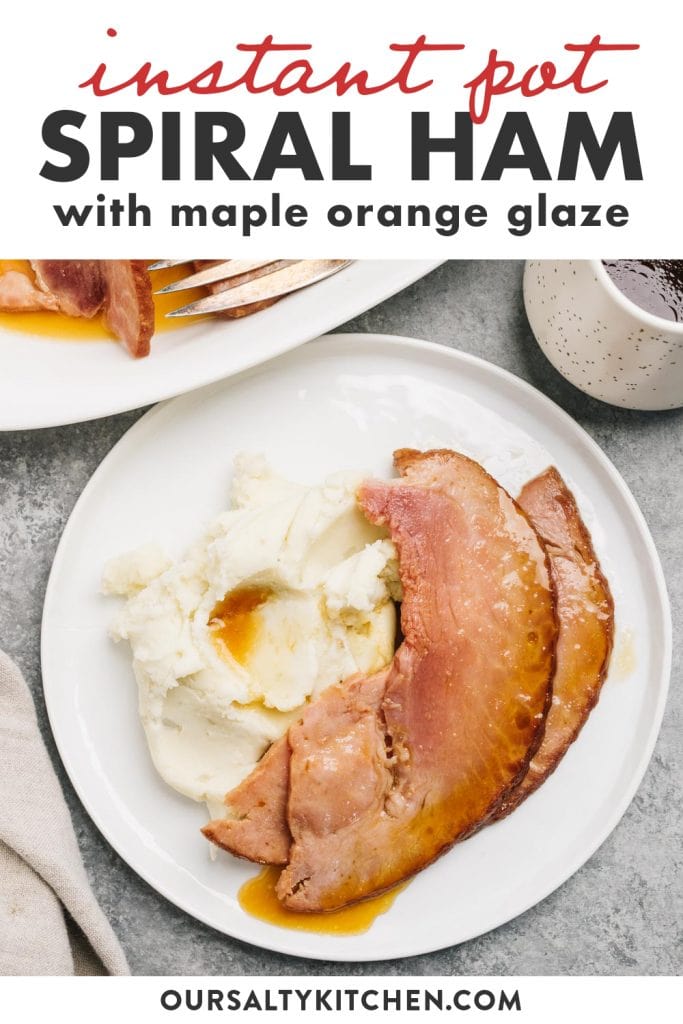 Use a pressure cooker to heat your holiday ham in half the time it takes in the oven! Master this easy Instant Pot Ham recipe with the push of a button. You’ll wind up with the most moist and tender ham slices ever. Finish with a simple maple orange glaze for an extra layer of flavor.

I don’t know about anyone else’s family but we only bring the “big guns” – turkey and ham – out for “big gun” holidays. Thanksgiving, Christmas and Easter, to be precise. Any holiday where you have to iron a tablecloth instead of, uh, just wiping it down, if you know what I mean.

Sure, a big part of the reason these stay on the proverbial shelf is the fact that a whole-ass ham and a whole-ass turkey are large, cumbersome, unwieldy beasts that require you to spend a certain amount of valuable time cooking them, relative to the number of mouths eating them. But no more!

Instant Pot Ham is so easy to make you may find yourself craving and carving it way more often. Just mind that freezer space!

Why Cook Ham in the Instant Pot?

Technically, you’re just reheating your ham. Which is no small feat when you’re looking at a big ol’ bone in shank, and not just center cut slices. The goal is twofold: make sure it’s fully warmed though, but also moist and tender.

And once again, the Instant Pot delivers! Instant Pot Ham is far superior to traditional oven warming. It requires zero oversight, takes half the time, and the results are consistently perfect every single time – a super tender ham that’s fully warmed through with slightly crisp edges.

Plus, you get two instant pot recipes for the price of one if you finish your ham with our maple orange glaze…

Butter: go for good-quality butter like Kerrygold – it will substantially improve the flavor when the glaze cooks down.

Maple Syrup: the buttery sweetness of maple syrup (plus that subtle hint of woodsiness) are perfectly tempered by the tang and acid in orange juice.

Orange Juice: fresh isn’t necessary, but do opt for pulp-free.

What Kind of Ham for the Instant Pot?

There are several factors you need to consider when selecting a ham, including the size of your instant pot and how many people you’ll be feeding.

This recipe is written for a cured, spiral cut ham. You’re essentially just re-heating the ham, so it shouldn’t be used on a fresh ham, which is raw.

Lastly, you’ll need to choose between a boneless or bone-in ham. A boneless ham is incredibly easy to slice and serve, and typically smaller. A bone-in ham typically has more flavor, but is a little more difficult to slice.

For this instant pot recipe, I opted for a 5-pound boneless spiral cut ham. If you love bone-in ham, go for it! Just be sure to purchase a size that will fit into your pressure cooker.

How to Make this Instant Pot Ham Recipe

Say goodbye to dry, overcooked ham. Instant pot ham is perfect every single time! Be sure to select a size and cut appropriate to your crowd and the size of your Instant Pot. Cooking times vary just a little, so be sure to check the cooking times below. And don’t forget the maple orange glaze – it’s punchy, just a little sweet, and makes a lovely finishing sauce.

How Long to Pressure Cook Ham?

The internal temperature should read 140-145°F for a re-heated fully cooked ham.

Is the Maple Orange Glaze Sweet?

Not at all! It you prefer a sweeter finish, consider serving this ham with my Grandma’s classic raisin sauce – it’s the perfect complement to the maple orange glaze.

Properly storing ham depends on whether or not it was cured before cooking. Uncured ham will keep in an airtight container in the refrigerator for 3-4 days; cured ham will last 5-7 days.

When freezing leftover ham – regardless of whether it was cured – make sure you slice and/or dice your ham before sealing and freezing (this just makes things easier later). Instant Pot Ham should keep for 3-4 months in the freezer.

In the microwave: place several slices of ham on a plate, then cover with a damp paper towel. Microwave in 30 second intervals, flipping the slices at least once, until warmed through.

In the oven: place ham slices into a casserole dish along with 1-2 tablespoons of water. Cover tightly with aluminum foil. Reheat at 325°F for 10 minutes.

On the stovetop: pan fry in 1-2 teaspoons of olive oil for 2-3 minutes per side over medium high heat. This is great for serving leftover ham slices as a simple breakfast with eggs and toast, or for ham and swiss sandwiches.

Turning a leftover holiday meal into a day-after-holiday breakfast is hands down my favorite way to use up leftovers!

Instant Pot Ham is the difference between regular breakfast and breakfast of champions. Set aside enough leftovers to make leftover ham frittata or add diced ham into leftover mashed potato waffles (obvs. easier if you also served mashed potatoes with your ham).

What to Serve with Pressure Cooker Ham

Whether you’re serving Instant Pot Ham for Easter Dinner or just on a Wednesday night, we’ve got loads of simple, scrumptious sides to round out the meal.

Going for the green? Oven-roasted lemon garlic asparagus is a bright and zesty complement, while classic green beans almondine are buttery and nutty.

If you want something richer to bring more decadence to the table, you can’t go wrong with super fluffy roasted garlic mashed potatoes. But personally, I love the added creaminess – and crunch – from cauliflower au gratin.

I always like to serve Instant Pot Ham with at least one side on the sweet side, just to bring out the sweetness from the glaze. Maple cinnamon-roasted sweet potatoes or our air fryer apples are perfect for this!

Did you make this Instant Pot Ham with Maple Orange Glaze? I’d love to know how it turned out! Leave a comment and a rating below. 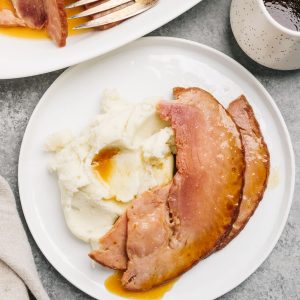 No ratings yet
Author: Danielle Esposti
Print Recipe Rate this Recipe
Say goodbye to dry, overcooked ham. Instant pot ham is perfect every single time! Be sure to select a size and cut appropriate to your crowd and the size of your Instant Pot. Cooking times vary just a little, so be sure to check the cooking times below. And don't forget the maple orange glaze – it's punchy, just a little sweet, and makes a lovely finishing sauce.
Prep Time: 5 mins
Cook Time: 10 mins
Time to Pressure/Natural Release: 40 mins
Total Time: 55 mins
Servings : 10
Calories: 374