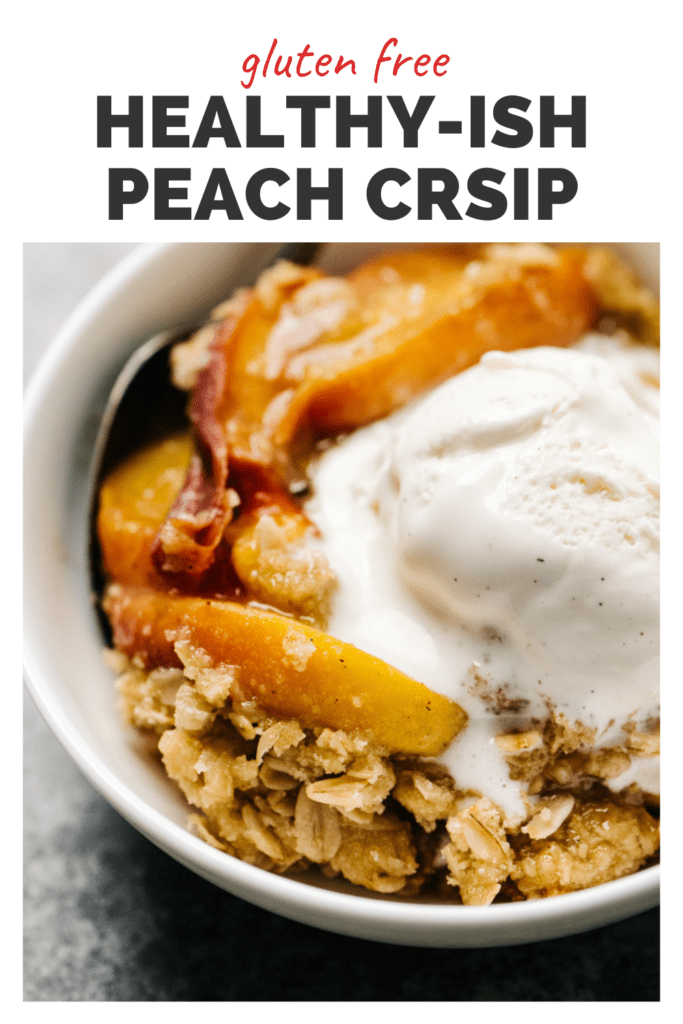 This crisp is just peachy! Get maximum dessert satisfaction with minimal effort when you whip up this easy Peach Crisp. Our gluten-free version features juicy peach filling and buttery streusel topping with notes of cinnamon and vanilla. Elevate this classic summer treat by going a la mode.

As much as I adore and embrace (and ingest) Southern cuisine, I’ll always give myself away as a Yankee because I’ll take a peach crisp over a peach cobbler any day of the week.

As much as I love a good biscuit, I crave that added hit of caramelly sweetness from the topping to complement the tart edge of peaches, cherries, berries, and apples. (Try my Apple Crisp or Cherry Pie Bars and you’ll see what I mean.) It’s like a dessert bonus!

And speaking of bonuses, just because this recipe is “healthy-ish” that doesn’t mean it isn’t also delish. Yes, there’s almond flour in the topping. But there’s also brown sugar and butter. And yes there’s agave (or honey) in the filling, but you can also slap some ice cream on top. Hence, the “ish”.

Peach Crisp with a Healthy Twist

Making peach crisp during peak peach season means sweeter peaches. And sweeter peaches means you don’t need to rely on nearly as much sugar as traditional recipes call for.

You still want – nay, need – a bit o’ brown sugar in the crumble topping for that caramelly finish, but we found that just a few tablespoons of honey or agave mixed in with the fruit filling is more than enough.

I also eliminated the need for wheat flour by using cornstarch to thicken the compote and almond flour in the topping. As long as you make sure your oats are compliant, you should have a fully gluten free peach crisp recipe.

What is the Difference Between Peach Cobbler and Peach Crisp?

Though both are delicious, cobblers and crisps are actually very different.

Crisps call for a crumbly topping of streusel mixed with oats or nuts, etc. to be sprinkled over top a layer of fruit before baking. Think of it as a crumble pie with no crust.

Cobblers, on the other hand, are generously topped – and, depending on the recipe, bottomed – with biscuit dough and wind up resembling a dump cake, much more than a pie.

How to Make Peach Crisp

We may have found the perfect summer dessert! This recipe for peach crisp is (1) loaded with limited-time-only fresh, ripe peaches, (2) relies on plenty of pantry staples so you don’t have to forage, and (3) is so easy to make you might wonder why you don’t make it a daily ritual. Oh, and did we mention this peach crisp gluten free and has less added sugar? Healthy-ish and delish.

Do You Need to Peel the Peaches for Peach Crisp?

Nope! You can if you want to, but frankly I think it’s a pain. Peach skin is delicate and delicious, plus you’ll get a boost of extra fiber from the skins.

Are Canned or Frozen Peaches Ok to Use?

Ok? Yeah. Sure. They’re “ok.” But here’s some tough love – if you CAN get your hands on fresh peaches while they’re in season, you should.

That being said, life ain’t fair! While fresh peaches are ideal, frozen or canned peaches can be made to work.

Our first choice substitute are frozen peaches. Defrost them first and drain any excess moisture.

We don’t love canned peaches as a substitute, as they can be too sweet (and frankly, too wet). If you’d like to use canned peaches, select no-sugar peaches, then rinse and drain well.

Store leftovers in the fridge in a sealed container or wrapped with cling wrap for up to 3 days.

Reheat single portions in the microwave for 30-60 seconds. If you want to reheat a large batch, opt for the oven. Warm for 10-12 minutes in a 350°F oven, covered with foil to prevent the topping from too much browning, until bubbling around the edges.

Did you make this healthy peach crisp recipe? I’d love to know how it turned out! Leave a comment and a rating below. 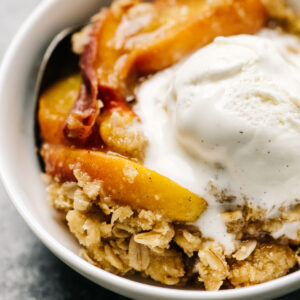 5 from 1 vote
Author: Danielle Esposti
Print Recipe Rate this Recipe Pin Recipe
We may have found the perfect summer dessert! This recipe for peach crisp is (1) loaded with limited-time-only fresh, ripe peaches, (2) relies on plenty of pantry staples so you don't have to forage, and (3) is so easy to make you might wonder why you don't make it a daily ritual. Healthy-ish and delish!
Prep Time: 15 mins
Cook Time: 25 mins
Total Time: 40 mins
Servings : 8
Calories: 190