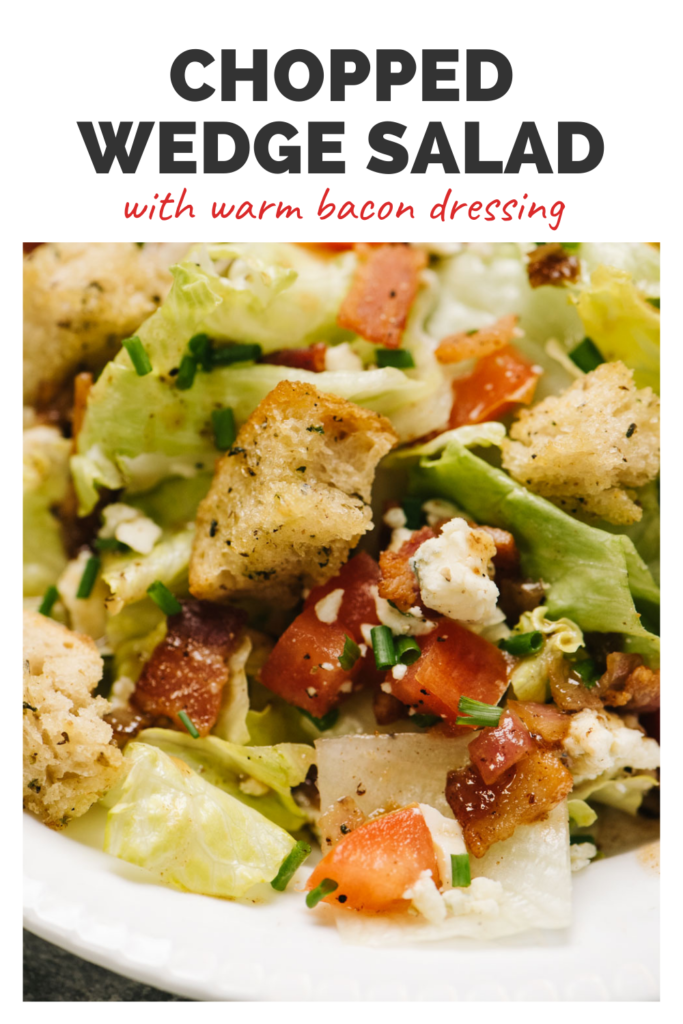 Is there a salad more perplexing than the wedge salad? It apparently has a history that pre-dates its surge to popularity in the 70s, and I know we love to revisit 20th-Century dishes, but I am hard pressed to comprehend why it had another recent-ish resurgence.

I can only assume it showed up on steakhouse menus 50 years ago because they already had to provide you with a serrated knife with which to cut your prime rib, so why not get more than one use out of it? But thanks, Sizzler, I don’t need to practice on a slab of lettuce.

Then, I don’t know, a decade ago (?) this cumbersome starter showed up on menus again. And not just at steakhouses. And I need to know why. There is no dish less fun than wedge salad to eat despite its near perfect combination of flavors and textures.

There is nothing not to love about the flavors featured in a wedge salad recipe. But since there are things to loathe about eating it, I simply got rid of them.

What is a Chopped Wedge Salad?

To put it bluntly, a chopped wedge salad is just an easily edible version of the original. A little more work on the front end allows you to enjoy the same great (evenly-distributed) flavors with no effort or mess at the table.

This chopped wedge salad recipe is one of my favorite lunches, but totally works as a side salad to accompany a hearty protein. It draws on the classic with a few twists that make it healthier, tastier, and better…er.

Right outta the gate, I eliminated the need to cut your lettuce on your plate by *gasp* chopping it first. Revolutionary, I know!

Next, I scrapped the blue cheese dressing in favor of crumbles (which give it just as much punch). It’s heavy and makes crisp iceberg go limp. Or it would if they ever gave you enough of it on a wedge salad!! But I digress… Instead, I added the warm bacon vinaigrette from my BLT Salad and Tomato Salad recipes, and yeah, it’s just as good as you’re imagining.

To top all that and seal this as the best chopped wedge salad ever, we added fresh croutons, which aren’t typically found on a wedge salad, because apparently wedge salad needed one more strike against it.

What Do You Put in a Chopped Wedge Salad?

When diced raw tomatoes are a key ingredient in a dish, like salad or salsa, there’s one special trick you employ to make them as flavorful as possible – salt them! Bonus side effect – it also draws out excess moisture to keep your salad crisp. Serious Eats has some serious tips in this article.

How to Make A Chopped Wedge Salad

Chopped Wedge Salad isn’t just as simple as slicing and dicing in advance. Start with super fresh lettuce and tomato. Make a vinaigrette with your bacon fat. Swap heavy blue cheese dressing for tangy crumbles. Add homemade croutons for extra good measure. Makes a lovely lunch or a super side salad at dinnertime.

Not with all that heavy blue cheese dressing, they’re not. Our healthy wedge salad recipe cuts out some of the fat and calories (and all the preservatives) by relying on a homemade dressing with whole ingredients.

Plus, if you’re on a low carb diet, this chopped iceberg lettuce salad will be an instant favorite as long as you skip the croutons.

Did you make this chopped wedge salad? I’d love to know how it turned out! Leave a comment and a rating below. 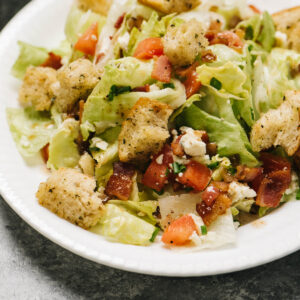