Since April is officially Asparagus officinalis season, let’s maximize our consumption and enjoyment of these beautiful, bright green stalks while they’re at their peak with five easy cooking methods. Some old, some new, but all tried and true.

There are loads of reasons to love spring – the sense of renewal and rebirth, sunshine and warmth, spending more time outdoors, flowers blooming, birds singing, Cadbury Creme Eggs. Yes, it’s a miraculous time. It’s particularly special for me for three reasons: grilling, asparagus, and grilling asparagus. (I’ve been waiting practically a whole year to make one of my personal favorites: Spring Cobb Salad.)

So imagine my dismay when I thought we were ready to fire up ol’ Bessie and get those first tender spring spears on the grill, only to face two more weeks of cold, wind, and rain. I overcame my distress rather quickly, thanks to my new air fryer, but it forced me to make a fairly bold claim: “I may never eat asparagus that’s not air fried again.”

So reader, let’s take a fantastic voyage together here as I put my big mouth to the test, literally and figuratively. We’re heading into peak asparagus season (April) so there’s no better time to consume copious amounts in spite of any, um … let’s just say, residual effects on your body’s chemistry. (Don’t clutch those pearls – we both know you were thinking it.)

Regardless of my personal preferences, rest assured at least one of these methods is going to work with the tools you have at your disposal to give you perfectly cooked asparagus. Cause honestly, you could hold a stalk of asparagus in your bare hand by its woody end and toast it over the flame of a Bic lighter and it’d probably still taste amazing. But we won’t be testing that theory today.

I love the fact that asparagus is one of the few vegetables people don’t look at you sideways for picking up and eating with your fingers (c’mon, we all think it’s unwieldy), but apparently, certain fine dining establishments don’t consider that a “benefit,” so let’s talk nutrition.

The best asparagus is fresh, bright green, and firm. Head to the farmer’s market for the freshest of the fresh. It’s in season from about February through June, but peak season is considered April.

What’s the Difference Between Thin and Fat Asparagus Spears?

This all boils down to biology. “The thickness of a spear has nothing to do with its age—that is, a thin spear will not mature into a thicker spear. Rather, diameter is determined by two factors: the age of the entire plant (younger crowns produce more slender stalks) and its variety.” (Cooks Illustrated) In other words, it was born this way, baby.

How to Roast Asparagus

If you’re a year-round asparagus eater (or you don’t have a grill or air fryer), you can’t go wrong with roasting. This tried and true method spotlights the vegetable itself, but be mindful – getting it perfect means using the recommended amount of oil. Too much or too little and you just have a pan of disappointment.

How to Grill Asparagus

Perfectly-grilled, lightly-seasoned fresh asparagus during peak season is a thing of beauty, but it’s also a limited-time-only preparation based on your climate. Plus, you need to be one with your grill and know when to pull your spears. Slightly charred tips are wonderful, burned ones aren’t. (If you master this technique you may call my air fryer assessment BS, but I still give it the edge for manageability and consistency.)

How to Sautee Asparagus

This little gem is more of a side dish recipe than a straight up cooking method, but it’s fast, easy, and absolutely delicious. You certainly could saute asparagus on its own but garlic, pine nuts and parmesan absolutely elevate the flavor. If you’re looking for other stovetop preparations, asparagus is also widely featured with other complementary veggies in stir fry recipes.

How to Bake Asparagus

Why bake when you can roast? Easy – flavor absorption. I like this particular method when I’m using balsamic or another marinade. Lower and slower allows that sharp, sweet flavor to sink in and caramelize a bit.

Asparagus in the Air Fryer

If you told me that the most delicious cooked vegetable I’d ever consume would come from an air fryer, I might not have believed you – until I had Air Fryer Asparagus. It’s literally the fastest, easiest and tastiest asparagus I’ve ever had. In fact, it’s so good, I’d say it’s worth getting an air fryer if you don’t have one. Two stalks up!

Do you LOVE asparagus? Me too!! Tell me your favorite way to cook it in the comments section! 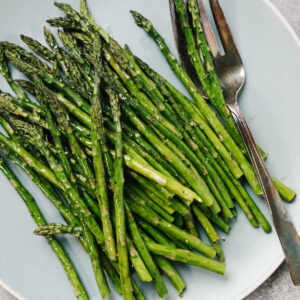 How to Cook Asparagus (5 Ways)

Author: Danielle Esposti
Print Recipe Rate this Recipe Pin Recipe
Since April is officially Asparagus officinalis season, let's maximize our consumption and enjoyment of these beautiful, bright green stalks while they're at their peak with five easy cooking methods. Some old, some new, but all tried and true.
Calories:

Did you make this recipe?Mention @oursaltykitchen or tag #oursaltykitchen!
« Buffalo Chicken Salad (Restaurant Style)
How to Cook a Whole Chicken (3 Easy Methods) »