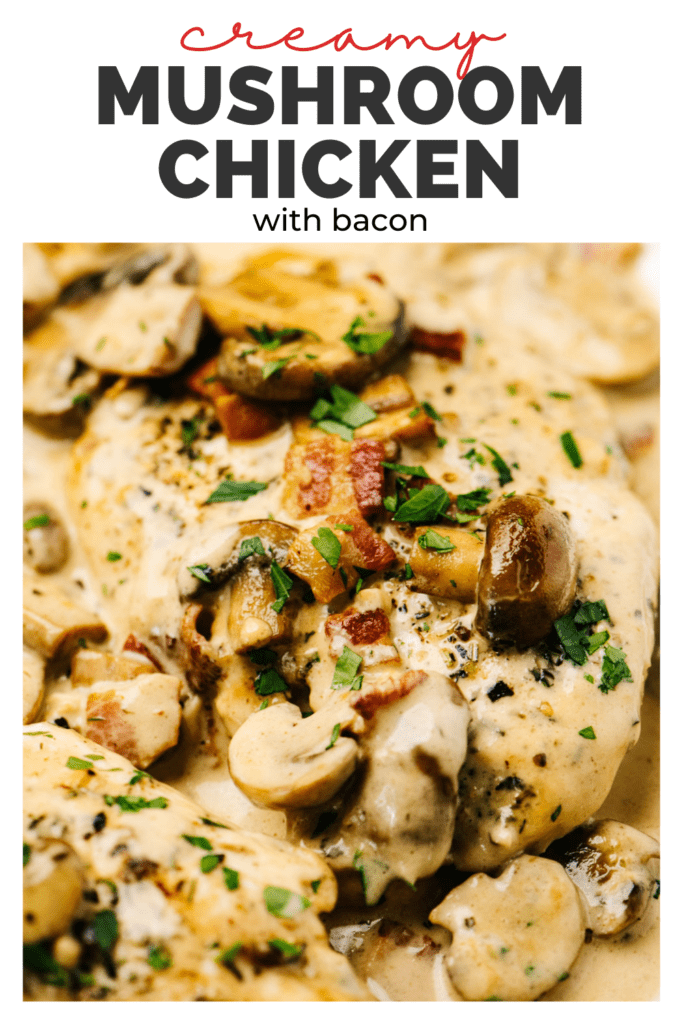 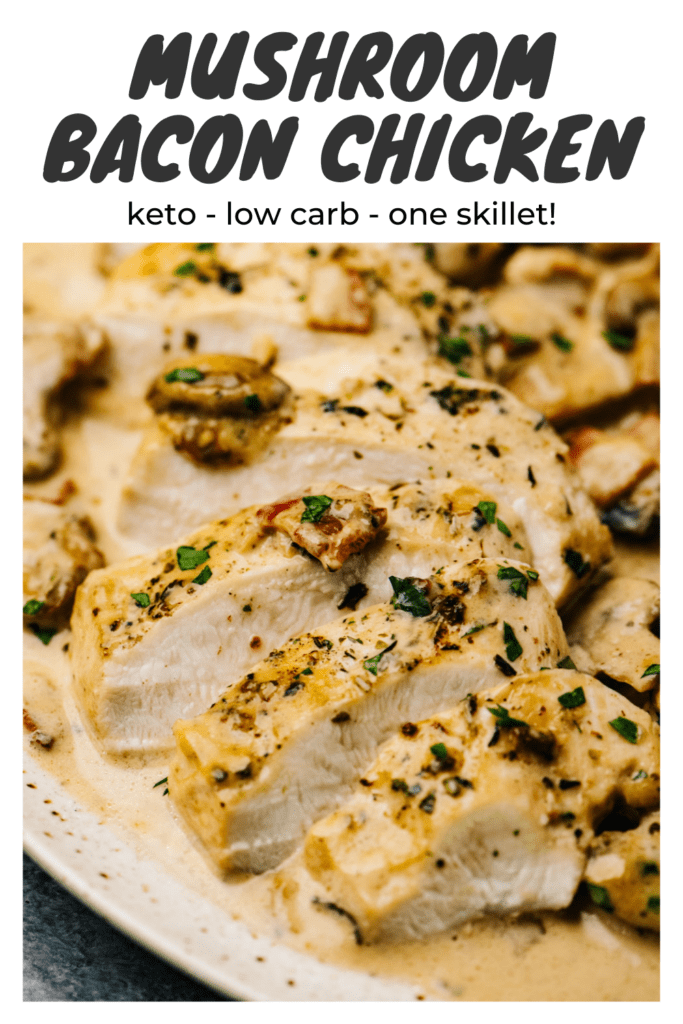 Comfort foodies unite! Creamy Mushroom Chicken with Bacon is a guilt-free decadent delight. No thickeners or stabilizers here. Just real, whole ingredients – chicken, bacon, mushrooms – in a tangy cream sauce with lemon, and garlic. Keep it low carb or keto with cauliflower, or plate it with pasta for a more indulgent dinner.

Forget stories about rotary phones and mix tapes, or walking to school up a hill (both ways), in the snow. I want to talk childhood dining experiences.

Kids these days don’t know what it was like. When I tell you choices were limited and that any meal not cooked in the kitchen – be it dine-in or takeout – was capital-S Special, I mean it.

In our single-digit-age eyes, the HEIGHT of luxury in the late 20th Century was a birthday dinner at TGI Fridays, and the height of the height of luxury was anything smothered in cream sauce. I couldn’t tell you the first time I had a creamy chicken dish, but I know it must have been there amongst the “flair.” (And it was probably served in a sizzling skillet that would take the skin right off your hand if you touched it.)

We were not cream sauce people at home. Macaroni and Cheese? Sure, in a blue box. An occasional alfredo, but not like legacy chain alfredo, which was essentially liquid cheese. By the time 2000 rolled around, everyone had creamy chicken everything (a.k.a. “three-cheese”), then it was creamy shrimp and smothered steak, and not only was it not special anymore, frankly, it was kind of gross.

Until today! Apparently, “90s comfort food” is making a “comeback.” So let’s feed our inner children once more with something less viscous and more carb-conscious. This keto-friendly creamy chicken mushroom recipe is a totally rad throwback. One bite and you’ll be right back in that 3-story phone booth, next to the antelope head.

For a condensed post with just the ingredients and step-by-step instructions, click to view the web story for this keto chicken breast recipe.

How to Make Creamy Mushroom Chicken with Bacon

When I say creamy, you say chicken! Never boring, never bland, this Creamy Mushroom Chicken with Bacon is an easy, wholesome “restaurant replica” that’s loaded with flavor, not fillers. Lemon and garlic bring the perfect hit of acid to a smooth cream sauce. Ready to serve with your favorite pasta or veggies in about 45 minutes.

Keep it Keto: Serve over riced or mashed cauliflower; or, choose an easy air fryer veggie to save time while you’re cooking, like broccoli, asparagus, or zucchini.

Carb it Up: There’s enough pan sauce to go ’round, so serve it over pasta – short (penne, cavatappi, gemelli) or long (fettucine or linguine) – or with risotto. Don’t forget your favorite crusty bread for cleaning up the plate!

Can I use chicken thighs?

Yes! Do trim any large fat deposits before browning, as they tend to get gummy when pan seared. I’ve also used chicken tenderloins with great results (be sure to sear in batches).

How to thicken the sauce?

This sauce doesn’t need a thickener to get rich and creamy! I do find that using homemade chicken bone broth makes a slight difference, but store-bought is totally fine!

Did you make this creamy mushroom chicken recipe? I’d love to know how it turned out! Leave a comment and a rating below. 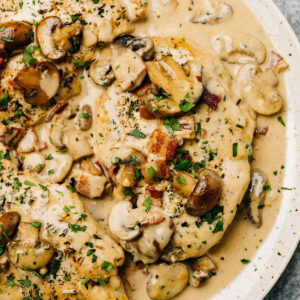