Sprouted lentils are such a fun way to incorporate pulses into your menu planning, and this this Vegan Sprouted Lentil Salad really makes them shine. With warm, nutty farro, crisp raw vegetables, and an herby vinaigrette, you’ll love this vegan lentil salad as much as we do.

Earlier this week, Cameron was feeding Asher (our 9 month old) his dinner. It was one of those pureed baby food pouches (don’t judge) and it was a combination of something like chickpeas, kale, and millet.

Cam read the label out loud and say something along the lines of “this sounds gross”. Then he gave a spoonful to the baby who, I kid you not, ate it greedily and promptly declared “yum!”. We laughed our butts off. That’s my baby boy.

This exchange perfectly mirrors Cameron’s response in similar situations. Clearly we are omnivores and we love our chicken and steak, so when I present him with a vegan dinner like, say, this sprouted lentil salad with farro, I tend to get a lot of trash talk in return.

But almost every time, he comes back with a “yum!” and I get validated. Why? Because vegetables are delicious. Throw in some sprouted lentils? Even better.

As I mentioned on Monday, salads are one of my favorite ways to use sprouted lentils. They make a terrific plant-based protein base for a simple recipe that comes together fast. And fast is essential when you have a busy schedule and a newly crawling nine month-old on your hands.

This vegan sprouted lentil salad comes together quickly and is super flexible.

My best tip? Use leftover grains – whatever you have will get the job done. I really love the warmth that nutty, hearty farro brings, but wild rice, quinoa, freekah, or bulgar are all fair game and would pair equally well.

I slice the vegetables quite thin and in a uniform size. A mandoline makes this job fast and easy. Keeping the vegetables the same size ensures you get every flavor in every bite.

Use whatever raw vegetables you have on hand. My spring staples – cucumber, carrots, and radishes – were perfect.

I added a bit of sweetness to this recipe with some dried bing cherries. They are both tart and sweet, and do a good job of complimenting the slightly bitter bite of the sprouted lentils. If you don’t have dried cherries on hand, dried cranberries or raisins would be perfectly fine substitutes.

For me, the dressing makes or breaks a salad. I made this one with fresh mint, a little bit of whole grain mustard, champagne vinegar, and olive oil.

We had this for dinner and it was a warm, filling, and super nutritious vegan dinner.

Recipe Tutorial:  How To Make Sprouted Lentils at Home

Check out my step-by-step recipe tutorial for making your own sprouted lentils. A little water, and little sunshine, and little magic are all you need for a hearty and filling plant-based protein.

Did you make this Sprouted Lentil Salad? I’d love to know how it turned out! Leave a comment and a rating below. 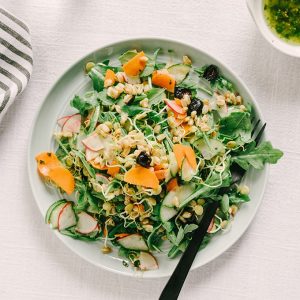 Use leftover grains for an even faster meal. Quinoa, wild rice, freekah, or bulgar would all be excellent substitutions.