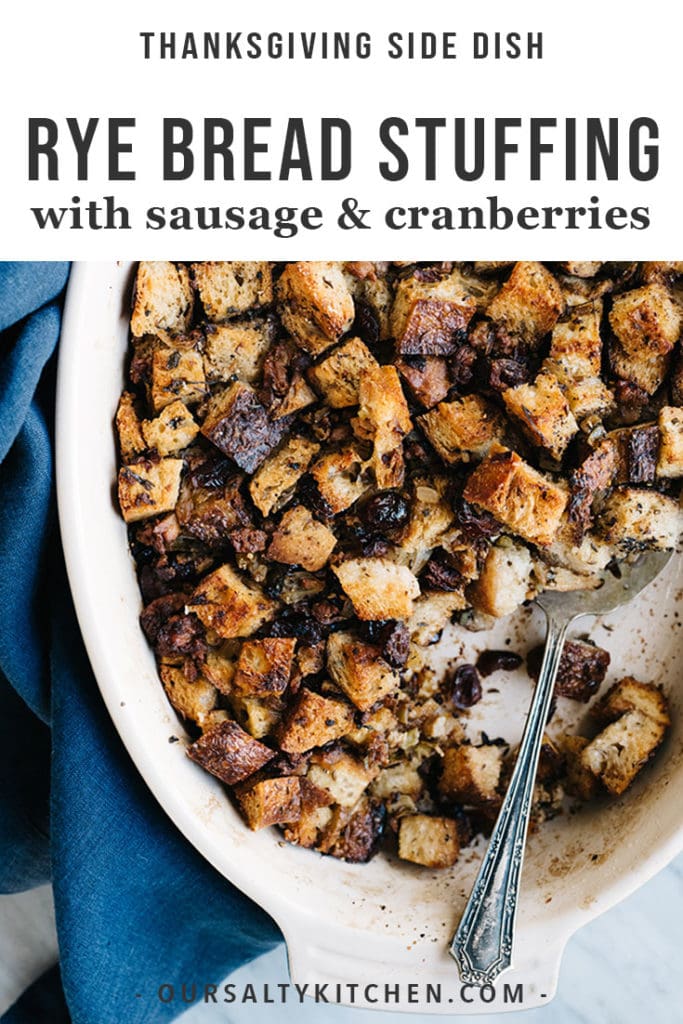 This Rye Bread, Sausage and Cranberry Stuffing is the perfect balance of savory and sweet. I like my stuffing cooked outside the bird because crunchy crouton topping is what’s up. Plus then I can justify serving a second type of stuffing, because yes – I just love stuffing that much.

Thanksgiving is hands down my favorite eating holiday of the year and the reason is stuffing.

Sometimes in college I would make a batch of stuffing and eat it for dinner, just because I could. In fact, I am eating a bowl of leftover stuffing smothered with gravy while I write this post.

We always bake at least one extra batch of stuffing* for Thanksgiving dinner because (1) there can never be enough stuffing; (2) crunchy croutons are the bomb; (3) I love stuffing so much that sometimes I want two totally different versions. Is this what they mean by “cook smarter, not harder”? If so I’m all in.

Today’s edition is a spin off of my mom’s sausage and cranberry stuffing. Rye bread croutons pack a savory punch and bring another layer of depth to an already nearly perfect recipe. The caraway seeds from the rye are perfect companions to the fennel seeds in the Italian sausage. Cranberries bring a sweet, tart finish, and fresh herbs keep everything tasting, well, fresh.

>>> Pin it now! Click this link to add this Sausage and Cranberry Stuffing to your Thanksgiving Pinterest recipe board.

How to Make Sausage and Cranberry Stuffing

The very first step is obviously to get your bread nice and dry. I stick my bread in the fridge for a few hours to get it firm, which makes cubing into 1″ pieces a breeze. After that, spread the rye bread cubes onto a baking sheet (or two) in a single layer and dry ’em out in a 400* oven for 15 or so minutes.

The sausage and cranberry stuffing base starts with salty, savory mild Italian sausage. Remove the casings, crumble it up, and get it nice and brown.

Transfer the sausage to a large mixing bowl with a slotted spoon, and then soften the vegetables in the sausage fat. I chop my vegetables on the smaller side so that they sort of melt into the stuffing. Then add the herbs and the cranberries and a splash of wine wine….

Then scrape it all into the mixing bowl with the sausage and croutons, and douse it with some chicken broth whisked with an egg.

Spread the stuffing into a casserole dish, cover with foil, and let those flavors soak in for a good long while in the fridge – at least an hour, but preferably overnight. You want the croutons to fully absorb all of the liquid before transferring to the oven.

When you’re ready to bake, pop the sausage and cranberry stuffing into a 375* oven with the foil still in place for about 30 minutes. Then remove the foil and let it cook an additional 30 minutes, or until the topping is golden brown and crispy on the outside, and juicy and tender below.

Looking for more Thanksgiving recipe inspiration? I aim to please. Check out some of my favorite recipes for the holiday season:

Did you make this Sausage and Cranberry Stuffing? I’d love to know how it turned out! Leave a comment and a rating below. 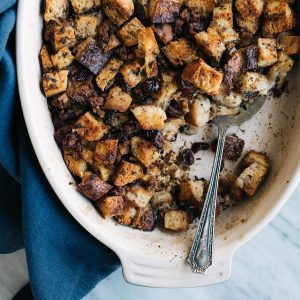 No ratings yet
Author: Danielle Esposti
Print Recipe Rate this Recipe Pin Recipe
I always serve two versions of stuffing at Thanksgiving – one cooked outside the bird, and one cooked inside because I LOVE stuffing. This sausage and cranberry stuffing (or dressing) is my favorite outside-the-turkey recipe.
Prep Time: 55 mins
Cook Time: 1 hr
Total Time: 1 hr 55 mins
Servings : 12
Calories: 279

Disclaimer: This post contains affiliate links, which means we receive a small commission (at no cost to you!) if you make a purchase using these links. Rest assured, we only endorse products we own and truly love!