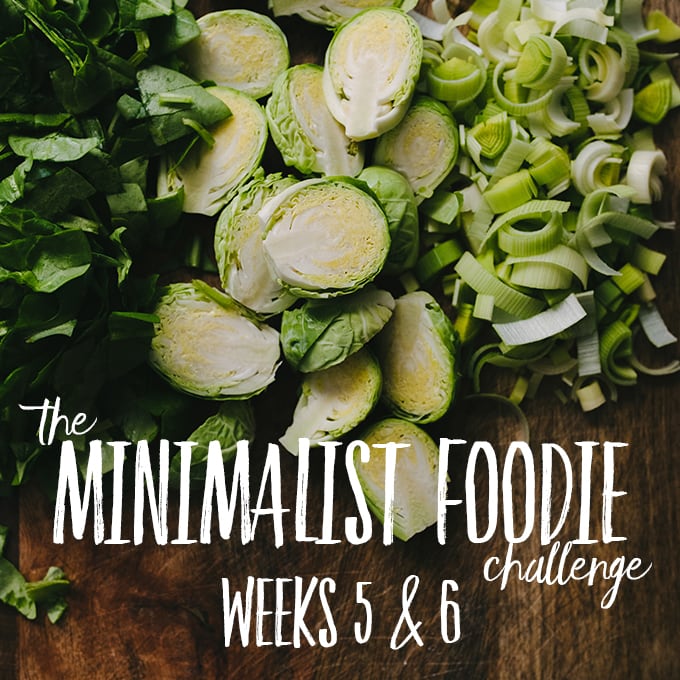 I sort of abandoned y’all on the weekly meal planning posts. As I’m settling in I’m realizing that my weekly plans are more…oh…suggestions? My life is a little nutty, and it’s a rare victory when I make what I actually planned to make. And as we’ve previously discussed (and one of the main goals of the challenge) I’m trying super hard not to let any little bit of food go to waste, and using up the fridge detritus often sets my plans off course. So I’m going to shake things up a bit and instead post recaps of my weeks. I’m aiming for bi-weekly. I’d love to do weekly, but, well…I’m not really interested in making promises I can’t keep.

Without further ado…here’s what we did the last few weeks!

Le sigh. Breakfast is a problem. About once a week I rally and make an awesome breakfast, like baked eggs or sweet potato hash. I did recipe-test some delicious whole grain blueberry muffins for the kid last weekend. Those need a tweak or two before they’re blog-ready, so stay tuned. More often than not we reach for scrambled eggs, eggs in a hole, or leftover waffles or pancakes. Sometimes it’s dinner for breakfast (I particularly like soup for breakfast. Yeah, I know). And sometimes it’s…gulp…cereal, because we have a ginormous Costco-sized box of Raisin Bran that I bought back in December that we need to get through (cuz you know…reduce waste). I need to do some pinning and get myself back in the breakfast game!

Lunches are pretty standard around here – leftovers, leftovers, aaaaaaaand more leftovers. Sometimes we have grilled cheese and salad, or soup from the freezer. The Kid pretty much lives on PBJ, cheese, fruit, and a hope and prayer.

Notes We had a commercial shoot for a taco party earlier in the day. The menu featured carnitas, fish tacos, mexican rice, and corn salad, with chips, fresh guac and avocado.

Dinner Pulled pork quesadillas using leftover carnitas from Sunday, along with sauteed brussels sprouts that I scrounged up from the produce bin in the fridge. I think I probably gave everyone some clementines too.

Dinner  To be perfectly honest…I haven’t got a clue. I didn’t write it down. Maybe it didn’t happen.

Dinner  Leftovers from the week

Notes  I used the leftover meat and carcass from the whole roasted chicken on Monday evening to make this soup. I will often make soup, stew, or something like Pot Pie a few days after we have a roasted chicken so that I can get every bit of calories and nutrition from that bird. Considering the price of a pastured chicken, those suckers need to be maximized. Keep an eye out for a post on this soon!

Dinner  Cameron had an event photoshoot all evening and ate on-site. I made the kid Mac n’Cheese and green beans. I’m pretty sure I ate the scraps directly from the pot while hiding in the kitchen.

Dinner The big kid went to the neighbor’s house for dinner so Cameron and I had homemade pizza. I made the crust using the recipe from Mark Bittman’s How to Bake Anything and it was easily the best pizza crust I’ve ever made. I defrosted some mozzarella that I just happened to have in the freezer and made a super quick sauce using a can of diced tomatoes, half an onion, and dried herbs.

Dinner We were in Philadelphia for the night celebrating my brother-in-law’s birthday. We ate at a vegan restaurant called V Street. Yes, I said vegan. And it was delicious (though we did pre-game with some wings earlier in the afternoon). I highly recommended the Cauliflower 65, Peruvian Fries, and Dan Dan Noodles.