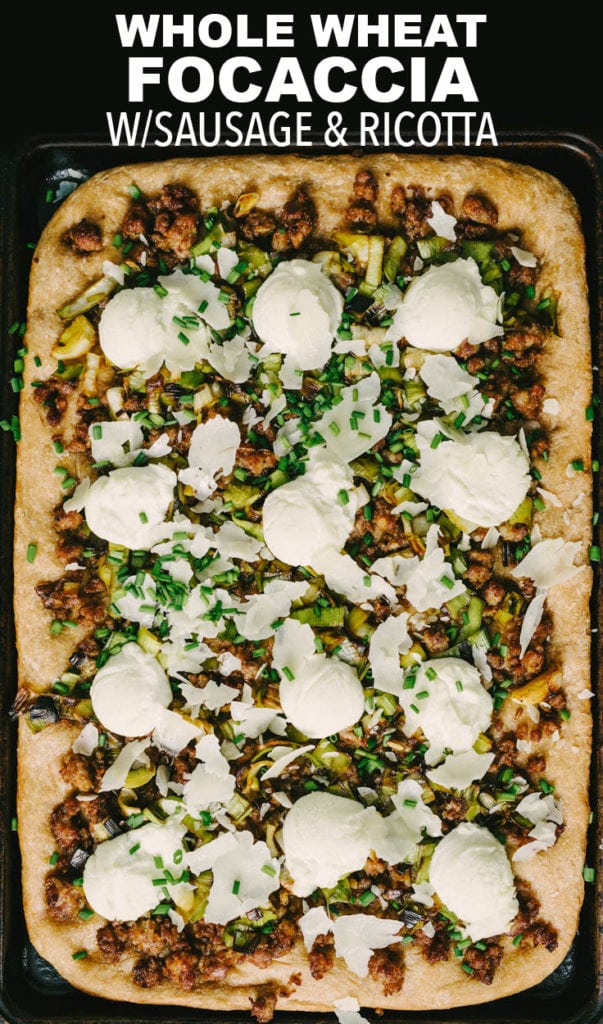 This savory (mostly) whole grain focaccia is crowd-pleasing party food, suitable for a variety of toppings. Though it takes some time to prepare the dough, little of it is hands on and it’s truly worth the wait. 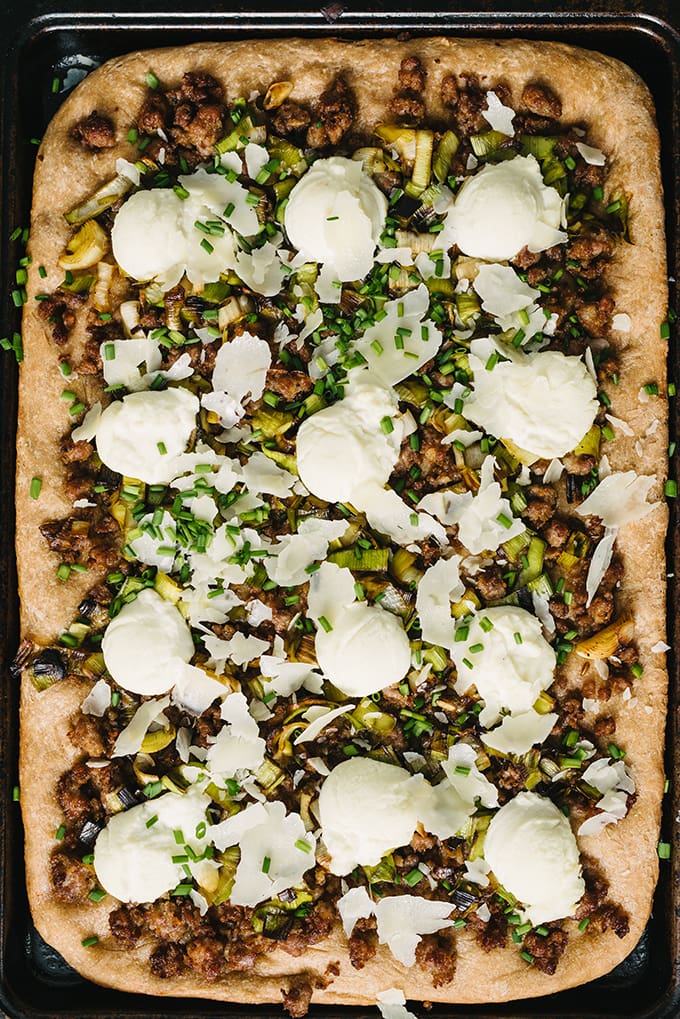 The year I graduated from college, I deferred adulting for several months. While most of my friends were starting grad school or heading off to jobs in new cities and coastlines, I had absolutely no idea what I wanted to do with my life. Classic millennial conundrum, eh? Big fat fancy education…undefined direction.

I toyed around with backpacking across Europe or meandering from coast to coast over the course of a year. But I was a broke college graduate with a mountain of debt that I needed to start paying off in the New Year, so I settled for a few extra months on my own, doing whatever suited my fancy each day. I spent that entire summer and into the fall in the college town of my alma mater. I had a job waiting tables and spent my free days and nights hiking, swimming in the gorges, learning to knit and forging friendships that have lasted to this day. It was the sort of stress-free small town adventuring that one can only subscribe to when they have absolutely no responsibilities or dependents.

Though my elders would (and did) claim that my time knocking around Ithaca, lollygagging in the sun, and reading a new book every other day was impractical at best and indulgent at worst, it was what I needed at that moment.

And the thing is? It was indulgent. That was sort of the point. Six months later I moved to DC and started my new life, and to this day I’ve never regretted my little sojourn in upstate NY. 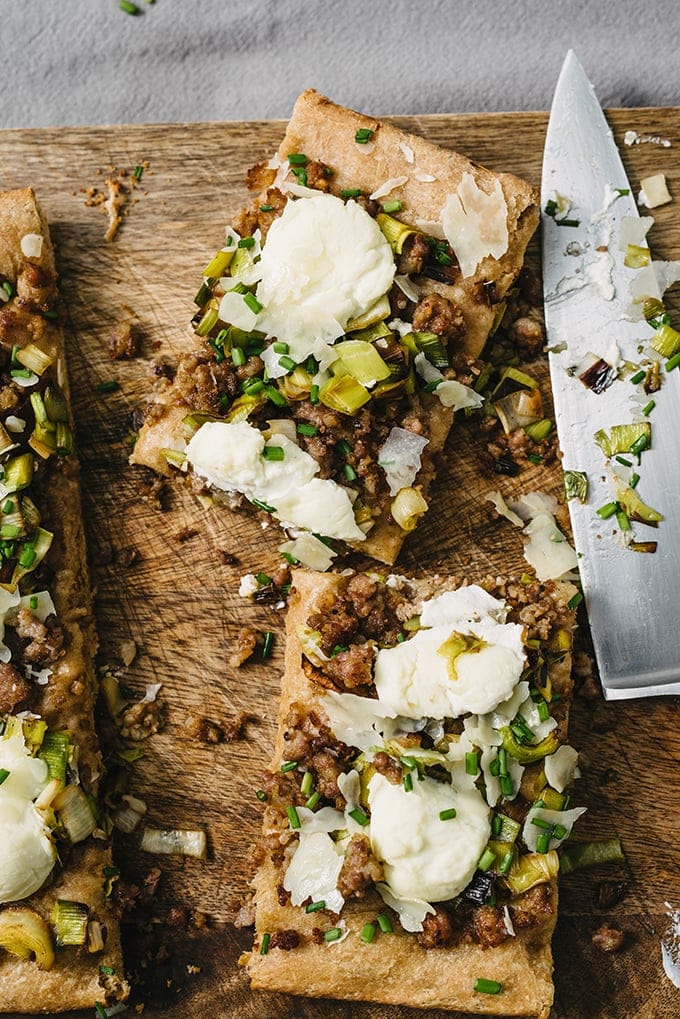 It was during this summer that I cultivated a true passion for home cooking and an appreciation for locally sourced, whole food recipes. I poured over Mollie Katzen’s Moosewood Cookbook (which eventually led me to failed experiment in vegetarianism), toured local wineries, talked to every chef I could find, and spent countless hours at the GreenStar coop market and local farmers markets. My mother gifted me my first set of pots and pans the previous Christmas, and in my tiny kitchen I made my first soup from scratch, simmered my first Sunday Sauce, and roasted my first whole chicken. I fell in love with food that summer and the bug hasn’t left me yet.

I distinctly remember baking my first loaf of focaccia in a cheap 9″ cake pan I bought from the dollar store. It came out perfect and I was so shocked that I called a friend and told her that we had to eat it straight away. I wrapped it up in plastic wrap for a simple picnic lunch where we proceeded to dunk big chunks into olive oil, topped with bits of salt. We ate the entire loaf in one sitting and then swam in the gorges for hours. For years I’ve used the same basic focaccia recipe. It never disappoints, and it always brings fond memories of that summer bubbling up to the surface. 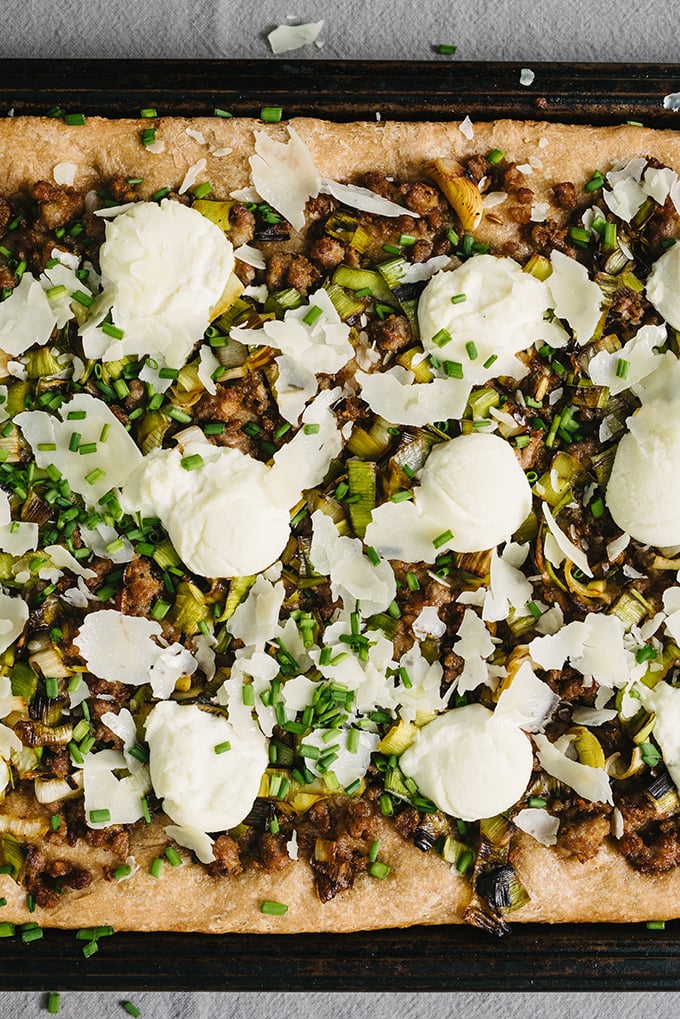 Over the years I’ve adapted this recipe into a, mostly, whole grain version. Some versions call for sugar but I use just a little honey instead. It’s doughy and nutty, and the perfect canvas for rich toppings like cheese and caramelized vegetables. Salt and focaccia are BFFs, so don’t skimp. Presented with a variety of toppings, it’s a terrifically impressive party food, sliced into individual serving sizes. I chose to serve this for dinner with a simple side salad and some fruit. It’s easily adaptable for all seasons, so don’t be surprised to see a few more variations throughout the year as the Minimalist Foodie Challenge progresses.

Focaccia takes a bit of planning time, but very little hands-on time. If you’re following a standard recipe, it needs a good 2 hours for the first rise plus a 40 minute or so rest period, so plan accordingly. The bright side is that you can whip up the dough in less than 5 minutes in the morning and allow it to slow-rise in the fridge all day for a relatively easy dinner prep. I’ll include directions for both methods in the recipe box below. 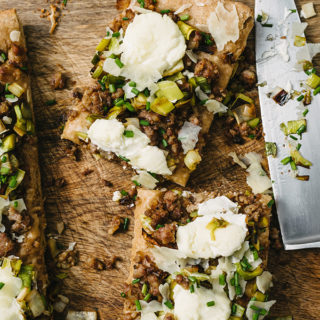 No ratings yet
Author: Danielle Esposti
Print Recipe Rate this Recipe Pin Recipe
This savory (mostly) whole grain focaccia is crowd-pleasing party food, suitable for a variety of toppings. Though it takes some time to prepare the dough, little of it is hands on and it's truly worth the wait.
Prep Time: 2 hrs
Cook Time: 1 hr
Total Time: 3 hrs
Servings : 8 servings
Calories: